The Haunted World Of El Superbeasto (2009) 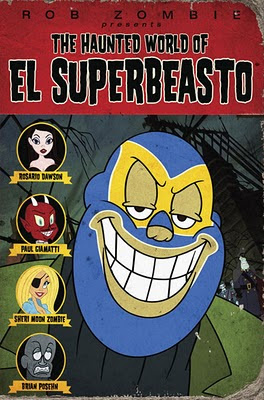 I finally got around to watching this. As of this review I've watched it twice and I'll probably watch it again. Now, with that being said, here's the skinny:
I am not a Rob Zombie fan. I mean his music is alright and all and while I thought that House Of A 1000 Corpses was waaay too derivative, The Devil's Rejects wasn't bad. I refuse to watch the blasphemy that is the Halloween remakes so that left this flick.
What can I say? I'm a sucker for cartoons.
The Haunted World Of El Superbeasto is a mash up of old Universal flicks, Ralph Bakshi, masked wrestler movies and the madcap art stylings of a Ren & Stimpy cartoon gone horribly wrong. And for Ren & Stimpy that has to be pretty damned wrong.
There are werewolf nazis, zombie nazis, Hitler's head, Sleestacks, a rip off scene form Carrie, Paul Giamatti as Dr. Satan, the robot from the old Lugosi serial The Phantom Creeps and...well, I could go on forever, but I won't. Needless to say this thing has so much stuff going on in it that you have to watch it multiple times just to catch everything and then I'm pretty sure you'll still miss stuff.
The thing that makes me laugh everytime is the exchange between Velvet Von Black (Rosario Dawson) and Otto, the ape with a huge screw in his head (Tom Kenny). When these two share screen time I laugh out loud every time. The chemistry is amazing.
Watch this flick, you won't be sorry.
Here's a trailer:

Posted by Douglas A. Waltz at 5:48 PM No comments: 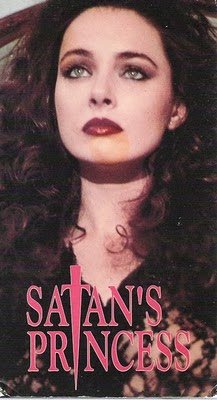 I had been missing out on a lot of movies I had recently acquired so I thought I would pop a couple of them in the DVD player now that most of my midterms have fallen by the wayside.
First up is Satan's Princess. I really thought it would have what I wanted in a late 80's flick;
Robert Forster? Check.
Boobies? Check.
Blood and gore? Check?
A ton of weird shit going on? Check.
I was bored stiff. Seems that some whacked out monk painted this picture of a chick and a dude who has a messed up face. Flash forward to the hear and then and it seems that this weird broad in charge of a modeling agency is actually the title character. Yeah she's pretty when she's naked and there is a lot of naked in this flick, but the movie is just dull, demon dull. Avoid at all costs. 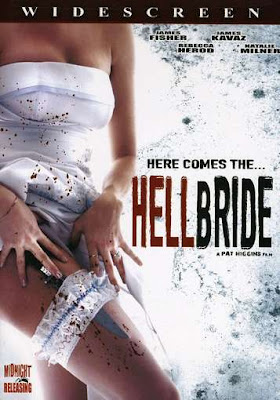 It was with some trepidation that I decided to watch a newer flick called Hellbride. It's a micro budget affair lensed in the U.K. if I'm any judge of accents. It seems that this woman was supposed to get married. Yeah, then she caught her future husband schtupping some other dame. She didn't go all ballistic right on the spot. She let this hate simmer for a while. She offed people involved in the wedding and, on her wedding day bit off her finger and spit it at her groom, ring and all and then gutted him like a fish. So, naturally, this made it an evil ring and that made more and more people wanting the damned thing. Everytime it ended up in a huge body count. Now it's present time and the ring has changed hands a few times. It's being used for a new wedding and you might think you know what's going to happen and you couldn't be more wrong.
This movie had attitude and a fresh, whacked out sense of humor that I find missing from a lot of modern day fare. I think if it had been made here in the states that it might not have been as funny. Has that off kilter British humor coupled with a nasty vengeful ghost story.
I am really happy that I watched this. I would have enjoyed more nudity that the one out of focus pair of sweater puppies, but what are ya gonna do.
That's it for this little outing. I'll be back soon with more reviews.

Posted by Douglas A. Waltz at 6:45 PM No comments:

Jamie Gillis Has Passed Away 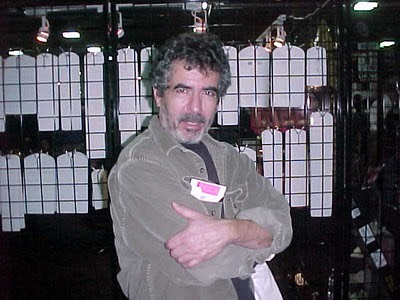 I'll be back later this weekend with reviews of Satan's Princess and Hellbride. Be safe.
Posted by Douglas A. Waltz at 6:27 PM No comments: 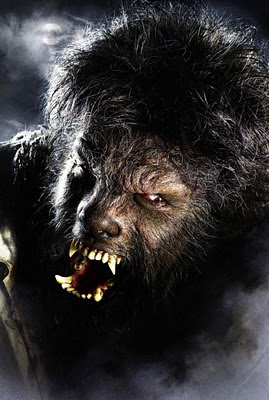 When I first heard about this film my initial reaction was...
Bleh!
See, here's the thing. I can't stand Benicio Del Toro. Everything I have seen him in I have not liked. I may have liked the movies just not him.
With The Wolfman this has changed. The movie has such a wonderful, lush, Gothic feel to it. They knew they were dealing with a pretty basic story and the film is under two hours. This is a good thing. The movie didn;t need to be any longer than this. Emily Blunt was fantastic and if Anthony Hopkins can manage to get into versions of Frankenstein, The Mummy and Creature Of The Black Lagoon he will have completed the Universal Monsters marathon.
I think that Del Toro was good for a couple of reasons;
First, watch The Wolfman, the original and then this. del Toro looks and behaves like Lon Chaney Jr. It is mind boggling how he manages to immerse himself in such an iconic role.
That being said I have a single complaint that is kind of a spoiler so shut your eyes if you don't want to see it.
Did we need the other werewolf to be his father? In the orginal the wolf that brought the curse to Lawrence Talbot was no more than a plot device to get the story moving.
I did like that they credited Curt Siodmak and used his little poem at the beginning.
In the end this is a worthy successor to the original and gives me hope that Benicio del Toro will prove me wrong again. His role in this film was magnificent.
Posted by Douglas A. Waltz at 6:15 PM No comments: