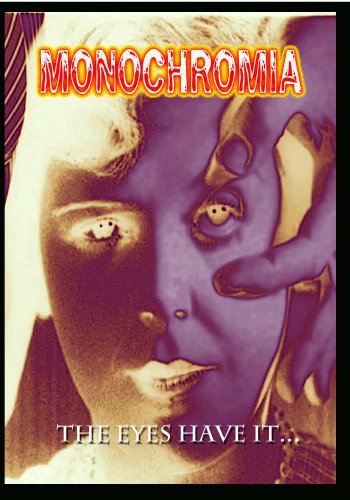 In a world a little like ours a whole lot like someone elses', a chemical weapon is released. It is not supposed to do much, but in the end the entire world becomes color blind. Nothing is the same.
Years later, a scientist (James Porter) is on the verge of a cure, but others covet his secret for one reason; greed. If they control who can and cannot see in color then they have ultimate power. The companies that used to produce color dyes for paint, fabric and many other things will come back and bring prosperity to the world again.
A mad billionaire sends his cronies to do his dirty work and the scientist ends up dead. Really dead. His cousin (Cherry Lynn Zinger) has to discover who did it and retrieve the secret of returning color to the world at large.
Being the considered expert on all films Legge, I was really looking forward to his new film. The basic concept felt a little darker and more satiric than the others. What? Don't believe I'm the expert? I did write a book on the man you know. 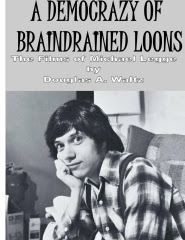 Here is the book I wrote. You can buy your very own copy of it here. Monochromia is not reviewed in it. That will be in the second edition.

So, how is the latest from the demented mind of Michael Legge? This reminds me a lot of Cutthroats, one of his earlier films. Where that one skewered the office worker environment Monochromia deals with things on a more world wide level. What would it be like if color was gone? Sure, we all like some old school movies and TV, but if your world was like that? It would be horrible.
Legge does double duty as the billionaire madman bent on controlling the world and his own flunky. Lorna Nogeira is, Alvin, the flunky's moll, Nadine. They are probably the heart of the film as while they do dastardly things, they do love each other in their own demented way. Being a huge Cherry Lynn Zinger fan I was ecstatic to see her back in a major role in a Legge film. She always makes me smile and this time was no exception.
The film works on the surface as a quirky comedy that takes place in a dimension slightly to the left of our own, much like Legge's political satire, Democrazy, but beneath the surface you get that feeling of dread. That whole everything is really just black and white, plain and simple. No gray areas. People are good or bad, evil or innocent nothing in between.
The things we expect from a Legge film are present. Scenes in a restaurant primarily, but this one felt more, I don;t know, intimate. The whole film dealing with a world wide crisis, felt more like it was what was happening on a street level. It made the crisis more personal and more real.
MONOCHROMIA shows us the importance of what we take for granted and makes us laugh in the process.
Now go buy this thing here.
Posted by Douglas A. Waltz at 6:09 PM No comments:

So, we recently got a ROKU box when we cancelled cable. One of the channels is called Drive-In Classics. It has a variety of categories and one of them was Grindhouse. That's where I found this little gem. A word of warning; Drive In Classics is a sponsored channel. That means while it is free to watch there are a block of four or five commercials every ten minutes regardless of what is happening in the movie. Luckily I remember the days of late night broadcast television so I have had the proper training for this. Others might not fare as well.
So, there is this family that decides to buy a movie theater in a small town. The dad is sick of being a shoe salesman on the road all the time so they pack up and go to the new town with the theatre.
One small problem. A disfigured maniac is holed up in the place and he likes fresh meat. Real fresh meat. And if that wasn't enough, their teen age daughter looks a lot like his woman. Seems she's not with us anymore.
MEATEATER is a quirky little flick. Most of the people in it went on to...well, nothing. The guy who plays the dad was in  Gas Pump Girls. Most of them did nothing else. The kid (Gary Dean) who played the youngster at least went on to be in an episode of Fawlty Towers and three episodes of Doctor Who as three different characters.
Probably the most famous of the cast would be Joe Marmo who, as the detective on the scene, had the coolest name as Lt. Wombat. He played Nacho 'El Gordo' in Scarface.
The intense amount of commercials did break up the tepid flow of the film and it does drag. There also seems to be a lot of conversation about meat. The mom serves up a hot dog and gives a mini commercial about how healthy they are for you. They sing the Oscar Meyer song and mention Jimmy Dean sausage.
I did like that they were showing nature documentaries and they juxtaposed shots of animals eating with people gorging themselves in the theater.
In the end, this is just a weird little flick with a couple of nice effects, no nudity and some of the worst acting you will ever witness.
Another win!

Here's a scene. Weird thing? Someone dubbed it into another language?!? 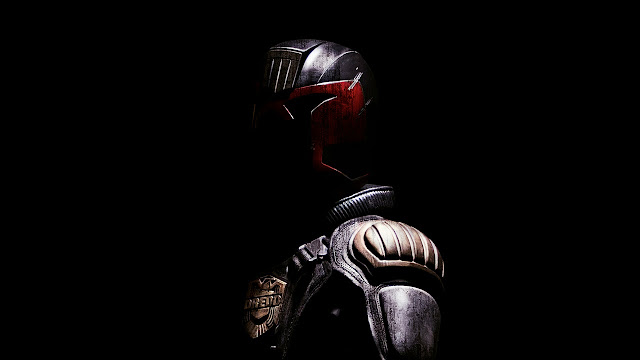 I finally saw this. It came to Netflix and since I already have Netflix, I decided to watch it. After the 1995 Stallone debacle I saw little hope in them getting Dredd right. I grew up reading Dredd. If they released a comic book with him on the cover, I bought it. Simple. Dredd was one of those foundations you could always count on. You always knew where you stood with Judge Dredd.
Now I have seen the movie.
Never in the history of movies from comic books have they ever gotten it this right. This is like reading a Dredd comic. every beat is dead on perfect. It's a live action perfect duplicate of Judge Dredd.
Throughout the film I kept waiting for the helmet to come off. Karl Urban is a decent looking fella. Every other actor in the world takes off the mask in superhero movies. why would this be any different?
The helmet never left his head.
Karl Urban is the best actor in the world.
He left the helmet on because he knew how important it was that he did. No vanity. No ego. Just an actor doing what the part requires and doing what needed to be done.
But, it's also about Judge Anderson. The psychic Judge who is there to prove that she can get the job done. Olivia Thirlby does a spot on Judge Anderson. She knows that Dredd doesn't approve of her. She knows that in his eyes she has already failed.
Thirlby shows us every facet of Anderson. Her determination because she knows she's different. Her smoldering sensuality in a uniform that covers her completely from the neck down and is far from flattering for the female form. She is Judge Anderson.
I thought it was genius that most of the film is contained in one locale. It becomes more what makes Dredd tick and what lengths he will go to to uphold the law.
He says the line once and it is perfect.
Should I have seen this in the theater?
Probably.
Will I buy it?
Absolutely.
IN a movie/comic book world where they make Hawkeye wear a different costume, where Hank Pym will not be inventing Ultron, where Superman does things that the real Superman would never do...there is Dredd.
Dredd is perfect.
If you have no idea who Judge Dredd is then I feel sorry for you. Everyone should see this movie. It is gorgeously shot. Everyone brings their A+ game. Lena Headley (300) brings a psychotic rage to the leader of the bad guys that is chilling to watch.
All comic book movies should pay more attention to Dredd.
It's perfect.
Now, excuse me because I am going to watch it again.
Posted by Douglas A. Waltz at 1:54 PM No comments: