In celebration of the month of October I will be posting every day for 31 days. A few of those days will be convention coverage as I am going to Cinema Wasteland this weekend, but the majority will be film reviews and God know what else. I invite you to make sure to keep me honest by checking in everyday to see what Divine Exploitation is bringing you.
I now return you to your regularly scheduled programming:

Posted by Douglas A. Waltz at 6:54 AM No comments: 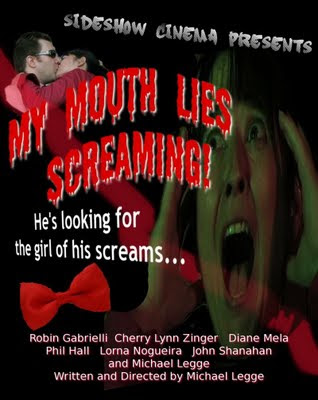 No, this isn't a review for the newest Michael Legge flick. I haven't seen it yet. This is more of a teaser for the newest flick from the man who brought us classics like BRAINDRAINER, HONEY GLAZE and my personal favorite, LOONS. Seems that the giallo genre has a little to worry about with this demented skewering of the genre from that madman from Mendon, Massachusetts.
I Can. Not. Wait.

And it will be available directly from Michael via Amazon. More details as they arrive here at The Compound.

Here's the trailer to whet your appetite.

Posted by Douglas A. Waltz at 5:13 AM No comments:

That's right, the online zine that covers the weird and macabre along with anything else they feel like is back after a two year hiatus. Cult Cuts is the very first online thing I ever wrote for. I was surfing the web one day and saw that someone was looking for movie reviewers. Having done Divine Exploitation for many years I felt more than qualified to do this so I wrote Mark Engle a little email.
Since then I have written for many sites, but Cult Cuts is always a near and dear place in my heart. Cult Cuts is the site where I have had physical violence threatened against my person and we have been threatened with legal action. Am I a great reviewer or what?
I think that has been about ten years now. It feels like much less time has passed.
Anyway, our lovely webmistress, Lina is back in fighting form and ready to rock the free world with the new and improved Cult Cuts!
Head on over there by going HERE and check it out.
I just finished my first review for the new site so it should be up shortly.
Posted by Douglas A. Waltz at 9:20 AM No comments: 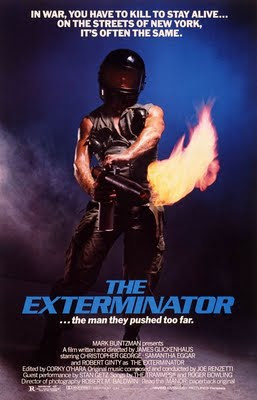 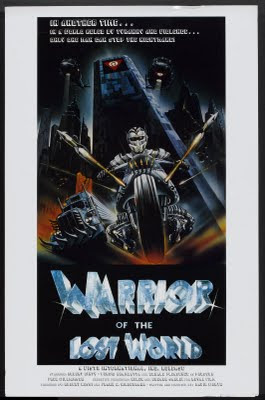 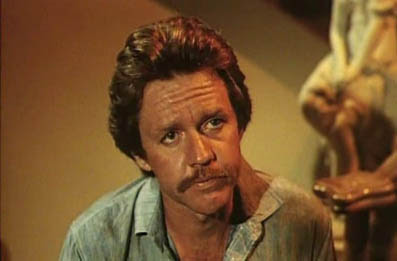 I always loved the film, The Exterminator. Warrior Of The Lost World was also another classic. Ginty was always a bad ass in any flick he was in. His very being secreted badass. We will miss you sir. Who's going to set the bad guys on fire and send them through a meat grinder for us?
Posted by Douglas A. Waltz at 9:48 AM No comments: 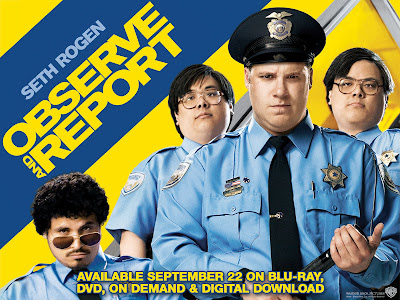 Okay, when this first came out I missed it at the theater. The trailers all played it like a comedy and I had already seen Paul Blart, Mall Cop.
Then I watched this work of genius.
I received the DVD in the mail yesterday and I have already watched it twice. What can I say? I am flabbergasted by many things concerning this film.
The first would have to be that this is being advertised as a comedy. Maybe if you look at it as the blackest comedy you have ever seen. This is nothing like a comedy. There are so many characters in this film that ring true to life that it is almost painful to watch.
How many films have you seen where they do a montage of people in a mall. Plenty I bet. From Fast Times At Ridgemont High to Mallrats. The mall is always played out as this bright, shiny happy place.
The mall in Observe And Report is very bright and very shiny, but the people shown in it are all to real. This is not a place for the beautiful people. It's a place for the people who really exist. It kind of throws you off a bit.
Ronnie Barnhardt (Seth Rogen) is the head of mall security. He lives in an insular little world where he is in charge.
Then it hits the fan. First we get a flasher who is running around the mall showing his nasty goodies to everyone and then the stores start getting robbed after hours. Ronnie knows that this is his time to shine. He can catch the pervert, catch the robber and impress the really hot girl, Brandy (Anna Faris) in the process.
Kind of plays like a fantasy doesn't it?
And how many times do our fantasies really play out like we envision them?
That's right, never.
This is no safe little comedy to watch with the kiddies. If ever a film has earned it's R rating, Observe And Report would be it.
Ronnie isn't a hero. He's a guy who has bipolar disorder and is off his meds. He has a delusional sense of what is right and wrong and is dangerous to himself and others.
That being said, Ronnie Barnhardt is my hero. This is a man who, no matter how twisted he may be mentally, has a dream and will overcome all obstacles to achieve what he wants. Sure, sometimes he doesn't know what he wants, but he never backs down.
If it makes him an unpopular dickhead, Ronnie Barnhardt knows what is right in the world and he will stop at nothing to achieve his goals.
As soon as he figures out what they might be.
If any other actor had played this part they would be up for an Academy Award. Any one who says that Seth Rogen's portrayal of Ronnie Barnhardt isn't Oscar worthy is a freaking idiot.
Anna Faris is great in this. Ray Liotta is great in this. Everyone who is in this right down to the nasty little flasher is great in this.
Basically it boils down to these two things;
One, you must see this movie. Warner Bros. has made it possible to do so through multiple means. There is no reason not to see this flick.
Two, Ronnie Barnhardt is my idol and anyone would be proud to have this man as their friend.
Yeah, I am fully aware that he's a fictional character, but you know what I mean.
Go watch the damn movie already.
Best quote;
"The world has no need for another scared man."
Very true.
Director Jody Hill did such a great job with The Foot Fist Way. Observe And Report is his proof that his work will always be of this caliber. And the soundtrack for this film is pehnomenal. Best use of a Queen song since Shaun Of The Dead.
Posted by Douglas A. Waltz at 3:01 PM No comments:

No yakking from me this time. Let's let the trailers speak for themselves. Then you will be compelled to order these things.
:0)

Posted by Douglas A. Waltz at 6:36 AM No comments:

So, I came up with this idea to watch 30 movies in September. See, the guys over at Eurotrash Paradise do this thing where they list what movies they watch the previous month and assign a rating of 0 to 10 for each flick. I thought it would be kind of cool so, I have done the same. I also thought it would be cool to give a capsule review of each flick after the month is up. So, in October, you will see this really big post. Watch for it.
Also, I am working out a deal with Severin Films to have a Screwballs DVD giveaway. Keep an eye out for that as well.

In the meantime, enjoy this trailer;