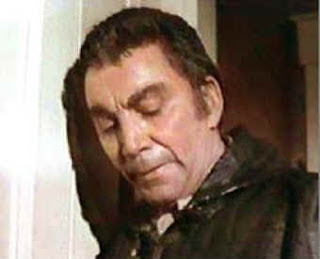 It is time to delve back into my 50 pack of Chilling Movies. It's been awhile, but I had some free time to put something in the old DVD player. HAUNTS is the one I picked. I was in the mood for a slasher flick and this one said that it had a guy whacking the locals with a pair of scissors. Giving the killer an A for originality, I was ready to watch.
My crap radar popped up when I saw that Aldo Ray and Cameron Mitchell were both in the flick. At least there would be some epic scenery chewing. That can always be fun.
Anyway, the leading lady, May Britt, plays Ingrid, a repressed, pious older lady that lives on a farm with her dad who is Cameron Mitchell. Seems that someone is indeed killing people with scissors.
I had to give them props as the first killer is interrupted by someone going out to the pantry for jam. The killer attacks her, but is interrupted in a second kill by the rest of the household. In formulaic slasher flicks he would have whacked the girl. The originality I spoke of early proved itself early on.
In fact the entire film is original. And confusing. I'm pretty sure there was more than one killer which made for a muddled mess, but still original. The ending is so out of left field that it isn't funny.
Cameron Mitchell gives a magnificent performance. Sweating, twitching and looking extremely uncomfortable. Aldo Ray starts out right over the top and there is nowhere else to go but up and that doesn't stop Mr. Ray.
Sure, the print is washed out and the sound is, well terrible would be a compliment, but it has it's own backwoods charm to it. I have to say that at no time does it seem to be cribbing from any other flick I have seen. I looked everywhere for pics for the flick, but only came up with one of Cameron Mitchell. It looks good though compared to the condition of the print that I have of the film.
This is one of the gem's of this box set and it makes me glad that I got it.
I'll try to do better in getting the rest of these reviewed. Since concluding one of my busier blogs I have a considerable amount of free time.
Posted by Douglas A. Waltz at 2:53 PM No comments: 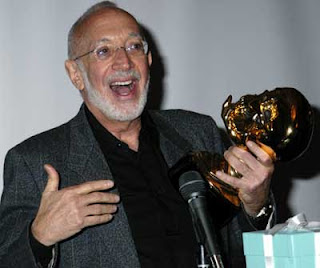 Yeah, this sucks. That's the only real way to put this. The man gave us such wonderful creations in film. Hell, even his toys were the coolest things on the block. Now, he's gone and will be missed by all of us who used to pour over old issues of Fangoria and look at the incredible detail he brought to his work.
My favorite memory of Stan would have to be when I got the DVD of John Carpenter's The Thing. There is this huge documentary that really is nothing more than talking heads, but so full of information. Stan came on to explain his dog puppet creation and I was mesmerized the entire time he talked. Soft spoken, but knowing what he wanted to say with great eloquence. It made me appreciate the way his mind approached an effects problem and now he's gone.
I know there is a Heaven and all I can truly hope is that Stan will be there for me to see in the hereafter. My prayers and thoughts go out to his family in this most troubling of times.
Stan Winston you will be sorely missed here on Earth.
Posted by Douglas A. Waltz at 4:54 AM No comments: 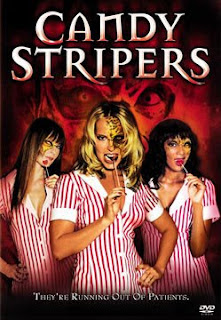 So, my wife and I were in the local Big Lots looking for a paper towel holder. Long story, don't ask. And Big Lots, always has this ton of movies on sale. This time there was a huge box of three dollar movies. Now, when they are dollar flicks I could care less and I will buy twenty of the damned things. I have a stack of them unopened at my house. So, a three dollar movie needs a little more finesse. It needs to be something that I really would watch if I'm spending the extra dollars.
Along comes the 2005 alien invasion flick, Candy Stripers.
Seems there is a spaceship crash and these two girls happen upon it. They find some dudes and they are dead as doornails so they hightail it outta there. Did I mention that one of the girls was blind? I didn't? Not important as she is really just the means that the slimy, slug like alien gets his grips into the titular characters of the film.
A few deep lesbian kisses later and we have a huge amount of possessed hot chicks who eat a lot of sweets and like to do the nasty with men so that they can cocoon them and make more alien babies.
Our leader, a lame (no, not that kind of lame. His leg got busted up earlier in the movie. Didn't mention it? Probably because it's not important.) basketball player and his buddies decide to wipe out the evil aliens. Seems that this girl that is crushing on our leading man is a diabetic and needs her insulin shots. Guess what will kill these aliens? Yup, you guessed it, insulin. Kinda stupid, but then so is alien possessed candystripers. And aren't candy stripers supposed to be young girls? While these ladies do look fabulous naked, and we do get fair share of naked, there is no way they are young enough to be a candy striper.
There are lots of plot holes like this, but where else are you going to get a hospital full of man hungry girls in skin tight nurses outfits? Plus, the gore flows pretty good. When you have a hot red head going down on a guy only to leave his crotch a bloody mess then you know you are in for a fun ride.
So, in the end, the flick has a million plot holes. Don't care. The dialogue is stilted and lame as Hell. Don't care. The plot is lifted from a million B movies as well as a little of Cronenberg's Shivers. Don't care. We get some gorgeous ladies in the altogether or prancing around in very tight hospital attire sucking on bright red lollipops. See, now we got a movie! If you love this kind of genre, the movie works at a pretty good clip. No real surprises. When you find out the quiet girl is diabetic you know that insulin will be playing a part later in the flick. You also know that she'll end up looking pretty damned hot by the end of the flick.
When my seven year old says, "Will this have a real ending or one of those, the monsters aren't dead endings?" You know that they have tried nothing new in the realm of film making and that's alright. It's good to have mindless entertainment to eat popcorn with.
And that's what Candy Stripers is. Bravo!
Posted by Douglas A. Waltz at 9:13 AM No comments: