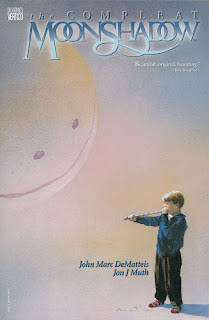 I remember back in 1985 I was a severe Marvel Zombie when it came to comics. I even bought a lot of their Epic line which was the Marvel equivalent of the Vertigo that DC has. Anyway, Moonshadow tells the tale of ...well Moonshadow. Seems that his mother, Sunflower, was kidnapped by these creatures known as The GL'Doses. The picture shows one of these on the cover. And, no it's not the kid with the flute, it's the big roundy thing. Seems that the GL'Doses operate without rhyme or reason. They travel the galaxy and once in a while they kidnap creatures and place them into their intergalactic zoo. It is here that Sunflower finds herself. After being there for a while she also finds herself getting married to one of the GL'Doses. The honeymoon is a quick one, the marriage is consummated and nine months later Moonshadow is born. Now, the zoo is not a very friendly place. Most of the creatures there look at Earthlings as some sort of pariah so Sunflower, Moonshadow and their cat, Frodo spend a lot of time by themselves. Moon's discovery of a neighbor, Ira leads him to discover things that most people would never want to know. Ya see, Ira is a six foot tall furball with a bowler for a hat and a rabbit tail. He is also a hedonistic madman. Moon craves his friendship so much that he brings him acres of porn from his huge library. Moon's father gave him a complete intergalactic library and Moon absorbs the romantic literature of Earth. His view of things is highly romanticized.
Then his father reappears and tells him it is time to leave the zoo. On a ship called The Decrepit the crew of Moonshadow, Sunflower, Frodo and a very unhappy Ira are propelled into the void.

And the adventure begins....

Vertigo was kind enough to release a quality trade paperback of the original twelve issue miniseries in 1998. The one problem with reading this series is the prohibitive cost. The trade paperback is forty bucks and the price on the back issues from Marvel is prohibitive as well. Does that mean you shouldn't read this? No. This is epic storytelling at it's very best The story by J.M. DeMatteis is both funny and heart wrenching. This is on a level with the best of Neil Gaiman. Add to that the watercolors of Jon Muth and you get a comic book experience that borders on true art and transcends comic storytelling that still has to be surpassed.

Maybe you could con your local library into carrying this. Most librarians would love to have something this pretty on their shelves and I don't know about your library but the ones here in Kalamazoo have quite a few comics on the rack lately. I think this a good thing.

Regardless Moonshadow is one of those things that I would consider must reading for any true comic aficionado. Oh, and one last caveat;

For some reason, Vertigo released the trade paperback with a one shot sequel to Moonshadow that explains what happened to Moonshadow after he was done spinning his tale. It's superfluous and meaningless. While the very end of it was a neat concept the execution left a lot to be desired and was vastly inferior to the original series.
Posted by Douglas A. Waltz at 4:35 AM No comments: 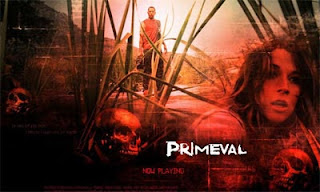 Sure, I realize that this is a relatively new flick for me to include in these pages, but it fits so well into the exploitation mode that it isn't even funny. First, came the advertising campaign that led you to believe that it was some kind of serial killer flick. Then, you discover it's a giant croc flick and it's based on fact. To make it even more interesting, we get some local political intrigue as well. What it boils down to is this;
Our lead reporter hot shot Tim Manfrey (Dominic Purcell from Prison Break) has screwed up a story real bad. This forces him to go with wildlife journalist Aviva Masters (Brooke Langton) after a giant, 25 foot croc that the locals in Africa have taken to calling Gustave. Seems he's been a naughty boy and now the newspaper that Tim works for has a plan to capture the damned thing. Of course, Gustave lives in an area of Africa that is a political hot spot with a civil war going on. The leader of the rebels even has the stones to call himself Little Gustave. So, Tim And Aviva, along with token black guy Steve Johnson (Orlando Jones) are off to Africa to catch a croc. Along the way they pick up expert tracker, Jacob Krieg (Jurgen Prochnow). Why is it that there are never any black expert trackers in Africa? Instead we get psycho German guys all the time. Are they breeding there after being left behind in Africa during WW2? Beats me.
Anyway, a lot of people were pissed when this thing played like a serial killer movie in the previews and then turned out to be a killer croc flick. All I have to say to them is learn your history.
In the old days the preview of a film could rarely have anything to do with the actual film. You went because the advertising campaign was cool and you hoped the flick could live up to it's name. Sure, a lot of the times this didn't happen, but you watched the flick anyway.
In the case of PRIMEVAL, it was pretty good. For a few reasons. It took real life events and copied them into a pretty standard plot. But then it added the flavor of the war torn country as a backdrop. One minute you're trying to escape from a giant croc and the next you're getting shot at by both sides of a civil war. This gave it a sense of reality that you don't get in your killer animal flick. Usually, these flicks center solely on the giant critter and that's all you get. In this case, it's just a part of the story.
In a year of remakes, blockbusters and nonsense it's good to get a flick that just delivers a solid piece of exploitative entertainment.
Posted by Douglas A. Waltz at 3:30 PM No comments: 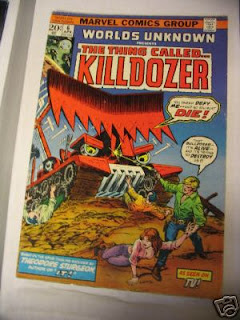 I will have to admit that I never read the novella that this movie of the week was based on by Theodore Sturgeon. I read the comic book that was based on the movie, but I'm pretty sure that that doesn't count.
Anyway, we have a crew doing construction on an island off the coast of Africa. Pretty obvious that it's the coast of California, but who are we to quibble? So, this meteor crashed onto the island and has been there for quite some time. Since this flick is called KILLDOZER you know it won't take long before this huge bulldozer hits the rock from space and then this alien entity takes over the dozer and man is it pissed! Clint Walker is phenomenal in his role as the foreman of the crew. He thinks there's a rational explanation for the dozer coming to life...for about a minute. Sure, the first guy getting whacked, Robert Urich, by the way in one of his first roles, could be a coincidence, but when it proceeds to chase people with no one driving, he gets on board pretty darn quick that something is horribly wrong here. Neville Brand is, well he's Neville Brand so you get that and it's always fun to get Neville Brand in a flick.
There are some terrible lapses in logic in this flick. The token black guy tries to escape from the onslaught of the machine by crawling into a metal drainage pipe. Metal drainage pipes are tissue paper to a bulldozer and this one is no exception. The big battle between the dozer and a steam shovel is pretty awesome because you know they didn't have any special effects going on. It was two guys banging this giant equipment together and making a lot of noise.
And how can this giant thing manage to sneak up on so many damned people? Are construction guys just stupid or is this just a failure of my suspension of disbelief to launch properly? whatever it is, this is just campy and cheesy enough to work very well regardless of the above mentioned weirdness.
I can't believe with all the retro stuff coming out on DVD that ABC hasn't gotten off the pot and released more of these things on DVD. They could make a set with this and DON'T BE AFRAID OF THE DARK and SATAN'S TRIANGLE and that creepy one with William Shatner and the house full of kids out in the country. ABC made some awesome made for TV flicks back in the day and it would be a good time to bring those puppies back for all of us to enjoy.
On a final note; I will be reading the novella that Killdozer is based on and I just learned that there's a band with that name. I'll have to check those out and get back to everyone and see how they are.
Oh, and the dozer never talks regardless of what the comic cover at the top says. Although that would have been pretty cool if it had a scratchy, spooky kinda voice.
More later.
I'm outta here.
Posted by Douglas A. Waltz at 5:21 AM 3 comments: