How can you go wrong with a film that stars Christopher Lee, Peter Cushing and scenery chewing by none other than Telly Savalas? The answer is that you can't. Christopher Lee plays a scientist who has made an amazing discovery in ancient caverns. It looks like a primitive man. He brings it aboard a train and with Peter Cushing in tow, they soo find out that Lee's specimen is far from dead. And he is not what they think he is.
I have to give HORROR EXPRESS props for what it is. Horror movie with a monster on a train. You don't get a lot of these. TERROR TRAIN immediately comes to mind, but that was a slasher flick and in HORROR EXPRESS we get a real live monster.
The train adds a sense of claustrophobia that you wouldn't have gotten with any other scenario. Lee and Cushing are at the top of their game and it's fun to see them not as Dracula and Van Helsing. You still have master of the props, Cushing and Lee is at his most distinguished.
And Telly Savalas doing his best crazed Telly Savalas.
More than this would ruin what is a truly great film of it's time. This is one to definitely pick up and watch. Fun for the whole family!
Posted by Douglas A. Waltz at 7:11 PM 1 comment: 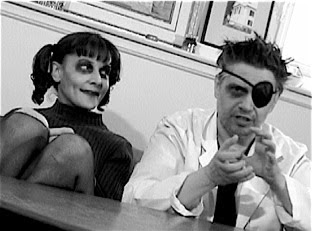 I realize that I said I was reviewing the fifty flicks in my Mega Pack I got recently but, it's my blog and I make the rules. So, suffer and enjoy a review of a flick that you must watch.

I have been addicted to a cable access show for quite some time. I am speaking, of course, of The Dungeon Of Dr. Dreck. Michael Legge infuses the horror host genre with new life as he and his undead cheerleader, Moaner (Lorna) introduce us to the finest public domain horror that money can buy. And, while the movies are definitely a welcome blast from the past, it’s Dr. Dreck and his wacky crew that make the show.
Now, we get all of Dr. Dreck that we want.
In The Dungeon Of Dr. Dreck we get the beginnings of the show. Dr. Dreck is a down on his luck mad scientist who has recently brought a cheerleader back to life. He has to deal with her and her undead cravings as he tries to find financing for his macabre experiments. The opening sequence is a dead on, hilarious homage to George Romero’s Night Of The Living Dead.
Eventually, Dr. Dreck and moaner hit on the idea of doing a show on the local UHF channel. They want to do a DIY self surgery kind of thing, but the station manager has a better idea. He notices that a rival station is getting all the sponsors because of their horror host show. He thinks that Dr. Dreck and Moaner would be perfect. After all, they can’t really be a REAL Mad Scientist and zombie, can they?
Unfortunately, the local darling and resident evil woman of that particular channel is Louise Morgan who has a huge block of time that deals with cooking and whatever else tickles her fancy. She does not want to give up her airtime for a couple of degenerates who show old horror flicks. And she will do anything to stop them, even murder! 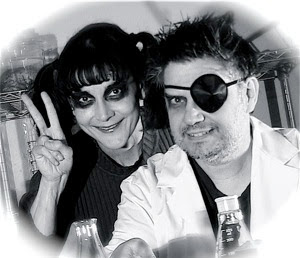 As I said at the beginning of this review I have been a fan of the show for quite some time. I was really looking forward to the movie. We had even sent lab equipment for the film and my kids have written letters to the show which they love to watch. When it arrived we were hit with a storm and lost power. There was no way we were going to be able to watch this movie. When the power stayed out for another day we knew that we needed to stay somewhere with power. I can’t sleep if it’s too quiet and I discovered that went for the rest of my family as well. We went to the church and camped out in the basement. This was a perfect place to watch The Dungeon Of Dr. Dreck. We all cheered at the opening credits when we recognized the lab equipment we had sent being used in the titles. We all screamed with delight when we had been given credits, and official doctorates, at the end of the ending credits. We had all been involved from a distance with this and it was fun to watch what we had done which wasn’t a lot. 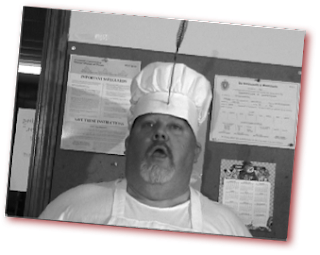 Now then, how was the movie?
It was fantastic. It reminded me of the old days of UHF programming where the local stuff was more personal and more fun to watch. I was reminded of Saturday nights with Shock Theater coming from the local ABC affiliate and then afterward tuning into the neighboring state of Indiana where they had Double Creature Feature. It gave me pleasant memories of my childhood.
It was a funny concept taking a real mad scientist and a zombie and injecting them into a realm of make believe a.k.a. television. The true sign of a successful film would be that it was in black and white and none of my children minded one bit.
Of all the characters in the film, our family gave big yells of delight to Stu the animated rubber rat. Stu is one hilarious rodent and could pull off his own spin off show. Something to think about Mr. Legge. 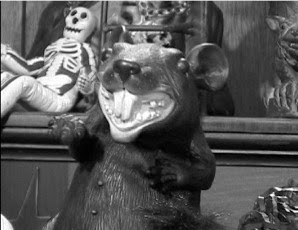 So, in the end, we are given truly classic comedy that is fun for the whole family. And did I mention the gimmick glasses that you have to wear during the showing of the classic film. 27 SPOOKS? I didn’t? Well, it is cool to see and the glasses do indeed add a dimension of weird to an already pretty weird movie.
Good job, Mr. Legge. Now, it’s time to go. It’s Saturday and here at The Waltz Compound that means another journey into…THE DUNGEON OF DR. DRECK!
This film is available for sale at;
http://home.comcast.net/~sideshowmike/
GET YOURS TODAY!!!
Posted by Douglas A. Waltz at 5:05 PM 2 comments:

Sorry for the delay folks. Between being worked to death at my real job and falling off my bike (see www.douglaslanawaltz.blogspot.com for details) Things have fallen by the wayside here at Divine Exploitation. I'm still working my way through the 50 pack of flicks so lets get on with it, shall we?
WITCHES MOUNTAIN opens with a woman coming home and finding a wig stabbed near the driveway. Then she finds her cat murdered and a little girl comes along and tells her that she was wrong for getting a cat. They go in search of something called Fritz and the woman decides that she best cut her losses by setting fire to the little girl and this Fritz that we never see.
Cut to titles.
Wow! What an opening. The woman, Carla, I think, goes to her boyfriend Mario to say that she needs him to go away on a vacation with her. He doesn't want a vacation so he calls his boss and gets an assignment on the next plane out. Mario is a photographer. and soon he's at this mountain taking pictures. He spots out star, Patty Shepard as Delia (Hey! It's my daughter's name!) and soon has topless pictures of her. This makes them immediate friends and Delia decides to drive up the mountain with Mario for his assignment.

Unknown to either of them, there is a coven of witches that don't like company and they are headed right into the midst of them.
This was a low key, but fun flick. The plot is nonexistent and the interaction between the two leads is great. Mario has a mustache that must be seen to be believed. He's the handsome face on this review. Not the wonky eyed fella. He's the hard of hearing innkeeper that warns them not to go up the mountain.

I liked that there was only music in the picture when necessary, not a lot of atmospheric mumbo jumbo that might have detracted from the cinematography. No real surprise since the director is primarily a cinematographer who has worked with everyone from Jess Franco to Amando deOssorio. This print is a public domain print so it's a little murkier than I would have liked, but twelve bucks for fifty movies. What are you going to do? Other than that it came across as this quiet little flick that if it had been filled with more crotch shots could have passed for a Franco flick.
Thanks to all my readers and I will be sure to be around more often. Next up will be HORROR EXPRESS.
Stay Twisted!