I was shocked! Shocked I say! I realize that I am no huge publishing mogul in this great big world of ours, but I do sell a few copies of various issues of Divine Exploitation every month.
But, this month, July.
Nothing. Zip. Nothing. Nada.
Kind of weird.
So, over there on the right is the stuff for sale. Click on a cover and it will whisk you away to the place you can order stuff. And if you have previously ordered, thank you muches. Maybe one of those issues would make for a lovely gift for a friend who would like something bizarre and off the wall.
Up to you.
Have an excellent day! 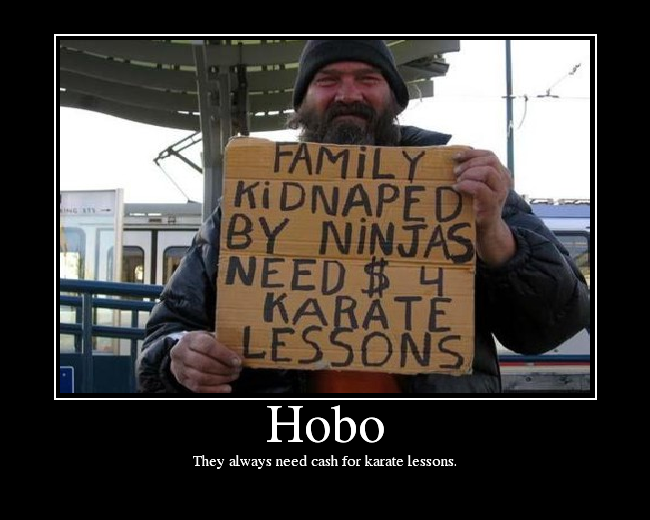 Posted by Douglas A. Waltz at 5:22 AM No comments:

First, no, not that Jack Webb. That being said this is a tight little novel in one of my favorite genres of fiction. The hard crime genre. No detective in this one. Just a hard luck case by the name of Al Duffey who recently got out of the joint on trumped up charges of car theft.
Now, his roomie in the big house has given him a lead on the man responsible and he wants to get some closure. That leads him to a small rodeo town and Gail.
Gail steals his heart, but she is married under the worst of circumstances.
It isn;t long before someone puts a bullet behind her husband's ear and Al is the man who must have done it.
Only, he didn't
Now, they are on a trail out of town littered with bodies and no where to turn.
If only it were that simple.
At a quick 144 pages this is a pretty good read. The main character is more interesting than most with his ex marine background and interest in ornithology inherited from his father who was famous on the subject. Factor is a rare happy ending and a twist that comes in the last act that propels the las thrid of the book at breakneck speed and this is a real winner.,
I admit I thought it was that Jack Webb, too.
Damned Wikipedia for shattering another dream.
Finally, the quote on the front cover from the Chicago Tribune is priceless;
"...so fast moving you won't have time to count the corpses."
Classic quote and, in this case, true.
Good book.
Posted by Douglas A. Waltz at 11:21 AM No comments:

Hunters of the Red Moon by Marion Zimmer Bradley 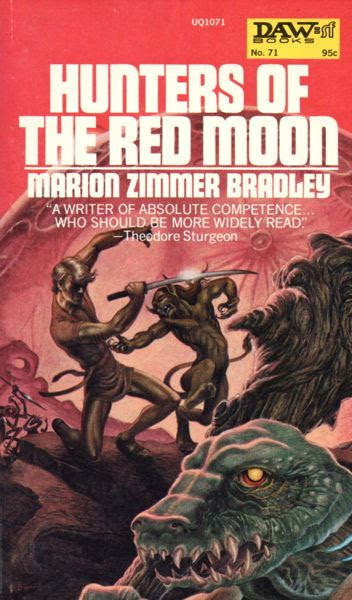 I have mentioned on numerous occasions that our local library has a bag of books sale. Fill a bag for 2 bucks and it is always a great time. I take off work to make it to these things. Anyway, I have decided to start plowing through my last set of acquisitions and this one wa first.
I sarted reading it and it's pretty fascinating.
This fella named Dane is picked up off his sail boat that he is sailing around the world by alien slavers. He is thrown in with a variety of species and when they try to escape they are deemed worthy enough to be sold to these legendary hunters. Dane hooks up with a huge lizard man, a gorgeous empath, a woman who reminds me of Edgar Rice Burroughs' Red Martians and a lethal cat man.
Here's the trick, the hunters are shape changers so they never know who is who they think they are.
Pretty good trick.
Here's the thing;
I was about half way through the book. I had never read this author before. I recognized the name, but never read a book. I decided to wikipedia her.
Yeah, remind me to never do that again.
After  slogging through the child molestation charges and her monster of a husband I was a little shaken.
I finished the book and liked it, but I think I would never bother revisitng this aprticular beast of a human's writing again.
Sheesh!
I have to stay off of Wikipedia.
Posted by Douglas A. Waltz at 5:38 AM No comments:

To be honest Falling… is really not my kind of movie. Not usually. Of course the concept is fascinating. Take ten acting students and have their teacher assign them a short film project. Then take the ten short films and mold them into one, cohesive feature film.
Sounds daunting doesn’t it?
Yeah, I thought so too.
A while ago I had the fortune to interview Michael Zelniker. While a lot of people may recognize the name from features like Naked Lunch or Bird, there is one of his films that will always be a favorite;
Pinball Summer.
One of my favorite of the teen films of the 80s I remember seeing it on a double feature with my dad and siblings at the Portage Drive-In. The second feature was Switchblade Sisters.
Now I realize you’re incredibly jealous at this point. What with me getting to talk with Mr. Zelniker on the phone and getting to watch double features that most people only dream about.
But, let’s set that aside and concentrate on Falling…
Mr. Zelniker mentioned it during our long conversation. I was fascinated by the concept and he sent me the movie to watch.
I watched it.
Sometimes I need to process things differently that don’t fit into the neat mold of genre films.
I needed to watch it again.
I grabbed my notebook, my pen and fired it up on Amazon Streaming. The movie started and I started to write down some notes.
Then, about five minutes later, I put down the notebook.
This wasn’t going to fit into that neat mold I mentioned earlier.
It does kick off with a young girl discovering that she is adopted while packing for a camping trip. Mad, she leaves on her bicycle. She passes a taxi that has another cast member and we follow her for a second before passing a small camper that has another cast member.
That’s when I get it.
This is ten different studies of people. People who are just trying to make it through their day. Whether it is dealing with pregnancy, grief, loss, discovering who they are and aren’t. People that come to terms with what is happening to them. Sometimes they flow with the things that occur in their lives and follow a specific path. Sometimes, they try to fit into a path that was never going to work and the results are disastrous. It’s funny, it’s sad, it’s tragic and there is even a little whimsy in there as well.
Ten, separate storylines that take place in a relatively small area of this huge planet and show how, in the end, we all interact with one another. Good, bad, we are all human and Falling… takes us on these ten little journeys and melds them into a single, coherent story line.
Just the logistics of what is done here makes my head hurt a little. I think that Zelniker has been in the business for so long that he saw the whole thing in his head and each student brought a piece of the puzzle to make it a single picture.
Now, as for the title.
Without asking Mr. Zelniker what it means, I have my own theory. I have always been fascinated by the idea that walking, the literal act of putting one foot in front of the other is nothing but a series of repeated, controlled falls. Every step is a fall where you catch yourself. These people and their stories have them walk by one another; interact ever so slightly with one another.
Taking those steps, falling with each one and catching themselves just like we all do every single day.
That’s the important part of the fall. Catching yourself.
Falling… shows us how it’s done.
Perfectly.
One last thing.
When I was watching this I had no idea that there was a little trick going on with the actors. It’s revealed in the end credits and I thought that was the final topping on the sundae that is Falling…
Did not see it coming. It works so well and shows a versatility that was unexpected and fascinating at the same time. 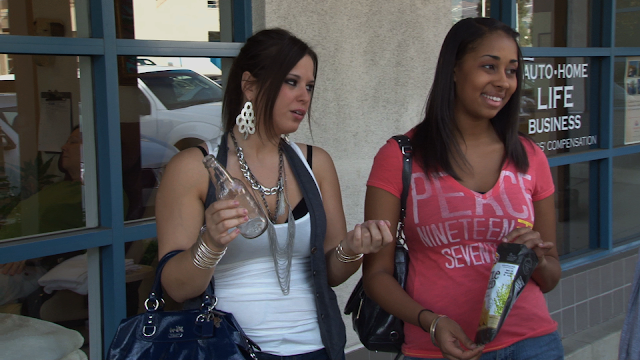