I couldn't find ten movies that I wanted on a list, but I was pretty happy with these so, in no particular order.

TWATLIGHT by Chris Seaver
Seaver always makes me laugh and when he manages to skewer such a popular flick and still keep it within the confines of his self created universe you know you're in for something special. Billy Garberina as Stella's dad about killed me everytime he appeared on screen.
Another of his that needs checking out for the year is I SPIT CHEW ON YOUR GRAVE the best rape revenge comedy ever made.
MY BLOODY VALENTINE IN 3D
Those of you that know me, know that I despise remakes, especially of my beloved slasher flicks of yesteryear, but I went and saw this anyway.
It was such fun! The guy getting his jawbone hooked by a pickaxe and flung into the audience was the most hysterical thing I have seen in a while. The little homages to the original flick and the blatant sequel ending made me feel like I was back in the 80's. In a good way of course.
CLOUDY WITH A CHANCE OF MEATBALLS
I saw the trailer for this and thought it was stupid. The kids wanted to go see it and I groaned. we went and I have not laughed this loud in a theater since I saw HOT FUZZ! Neil Patrick Harris as Steve the monkey! Awesome! Mr. T is in it. There are so many jokes and sight gags and just so much wonderness that I can't help but love this flick. This was the best animated flick of the year and I am fully aware that I just dissed UP. Don't care. This was better.
MY MOUTH LIES SCREAMING
If Michael Legge makes it, I watch it. Simple as that. His funny take on the giallo genre is a wonder to behold. The fact that the bow tie killer actually kills people with bowties is very funny. Set firmly in the Sideshow Cinema Universe this is one of the best things that Michael Legge has ever done. It's no LOONS, but nothing is going to top LOONS with me.
DEAD SNOW
Two words; Nazi Zombies.
WATCHMEN
I was a little worried going into this one. I had read the twelve issue series before it had been collected into the book that most people read. I can remember the months of waiting between issues that most people didn't experience. This was a comic book made for me. I loved this comic book. If this went South I was gonna get angry.
It was very good.
See, I didn't say great, but very good. Why? Well, there were many things that I loved about the film, but I had already loved them in the book. There were a few touches separate from the book that I liked, but really, no octopus monster? It would have worked and people would have bought into it. And IMAX made no difference in watching this except for the lightness of my wallet.
NINJA ASSASSIN
I went into this with no expectations and it delivered in spades. No real story to get in the way of the plot. An epic amount of ninja kickassery. Lots of spewing gore reminiscent of some of my favorite Japanese films. This movie had it all. It was a ton of pure movie watching fun.
INGLORIOUS BASTERDS
I usually have hit or miss with Tarantino. Some of his stuff is great, other stuff not so much. Having said that, this is a wonderful movie. I bought it on DVD the day it came out. Christoph Waltz is the best villain in so many years that I love to watch his performance over and over again. The best thing I can say about this film is that even though half of it is subtitled my nine year old sat there for the whole thing and was a little sad when it was over. So was I. I would love a good four hour cut of this film.
OBSERVE AND REPORT
This is my favorite movie. I love this movie. I said that these were in no particular order, but I really, really, really love this movie. I am not a Seth Rogen fan. He does alright, but I'm not a fan. He is not why I love this movie. I think I love this movie because of how real it is. Director Jody Hill knocked this one out of the park. People in this deserve Academy Awards and probably won't get them. Of all of these films on this list, this is the one that you needs to see. Well, this and MY MOUTH LIES SCREAMING, but this especially. If Jody Hill makes another film sign me up. Pure fucking unadulterated genius. I never get tired of watching this movie.

So, there ya go folks! The Top Nine flicks of the year. Now, for one last thing; I thought I would put out a best DVD release of the year. I am all about the packed DVD set and one company has always come through for me. I am, of course, speaking of Alternative Cinema and the DVD set in question is
SKIN IN THE 70s GRINDHOUSE COLLECTION 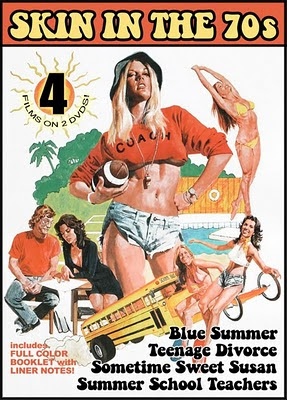 You get four films, a informative booklet that explains a lot about these four films and, well four of the most bizarre flicks of the time period. Here's what you get;

Blue Summer (1973) - Follow Tracy and Gene on a wild summer road trip full of hitchhiking hotties and crazy-ass roadside adventures. Starring Darcy Hollingsworth and Chris Jordan, this sexy 70s feature is the ultimate if the van’s a-rockin’, don’t come a-knockin’!
This one made me thirsty for Carling Black Label Beer. They drink crates of the stuff in this flick! I did manage to hunt down a store nearby that sells it and it is worth the trip. Great beer and a trippy movie to boot.

Sometime Sweet Susan (1975) - Beautiful but silent, the mysterious Susan harbors a deep and disturbing secret in this soft cut of the breakthrough 1975 sexy shocker starring Harry Reems and Shawn Harris. This is a weird film and doesn't really belong with the other three, but Shawn Harris is gorgeous to look at.

Summer School Teachers (1974) - What goes on when three co-ed cuties are hired as summer substitute teachers? A silly, sensual, Seventies sex romp featuring starlets Candice Rialson (Carnival of Souls) and Pat Anderson. Did he really do that with his teacher? Don’t let the school board hear about this one!
I got two words for ya; Candice Rialson. This blond bombshell was amazing and funny and gorgeous to boot. It's sad that she isn't with us anymore, but we have films like this one to remember her by.

Teenage Divorce a.k.a. Josie’s Castle (1972) - Three free spirits cut their ties with the old-fashioned “square” world and shack up in a love commune. A Seventies cult favorite featuring Star Trek’s George Takei (“Mr. Sulu”).
Mr. Sulu as a pot smoking hippy. Did you need another reason? I didn't think so.
Everyone needs to get ahold of this set from the folks at Alternative Cinema. Their website is charging less than 20 bucks for all this classic entertainment. How can you go wrong.

Okay, everyone have a Happy New Year and I'll be back next year with more of the same.
Seeya!
Posted by Douglas A. Waltz at 6:05 PM No comments:

Hey all, just want to wish all the faithful readers a very Merry Christmas and, if I don't post again soon, A Merry New Year as well.
Here's a little something to keep your yuletide warm; 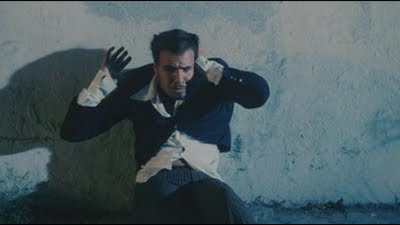 I admit to having an Ed Wood phase. Hell, if an Ed Wood movie comes on I will watch it. Just can't help myself. Anyway, I had heard of this film when it first came out back in the day and I meant to watch it, but it never happened. Fact is, it never played around here so, it fell off my radar. I remember lots of famous people being in it and that it was a silent movie. What the heck? I was game.
So, last week I watched it with my daughter, Dandelion. If anyone is going to watch quirky flicks with me it's going to be her. I think she was surprised by the lack of dialogue. Funny, so was I.
The movie is filled with sounds and music and grunts and screaming. Eartha Kitt sings a song at the end, but that's the entirety of actual words coming out of someone. 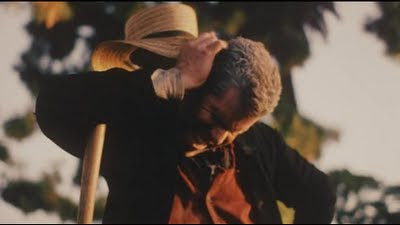 The plot is directly from Ed Wood's screenplay. In fact, sometimes there are reproductions of actual scenes from the script superimposed over the action. I thought that was a nice touch.
The basic plot is that The Thief (Billy Zane) has just escaped from an institute for the criminally insane. In drag, of course. First he tries to hold up an armored car, but when that fails he decides to knock over the bank. Shooting a teller he makes off with fifteen grand. 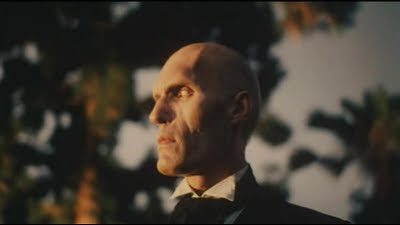 Later, he attends the teller's funeral, but he doesn't. Seems that he actually is attending a mysterious body's funeral with professional mourners. He stashes the cash, but when it comes up missing he goes on a murderous rampage trying to find his money from one of the professional mourners.
Before I go on, let me list the famous actors that are in this bizarre little film;
Billy Zane
Tippi Hendren
Ron Perlman
Christina Ricci
Andrew McCarthy
Ann Magnuson
Bud Cort
Jonathan Taylor Thomas
Carel Struycken
Eartha Kitt
Tara Reid
John Ritter
Ricky Schroder
Nicolette Sheridan
Sandra Bernhard
Karen Black
Leif Garrett
Dana Gould
Vampira
I mean look at this list! Sure, you could say some of them might have needed the work, but I don't think that's it. There was the Ed Wood chic surrounding Ed because of the Tim Burton film, but I don't think that's it either. I think it gave them all a chnace to be in something where they had to act. No speaking, no words or familiar mannerisms that come with speech. They had to sell it on their own and not look like idiots while doing it. 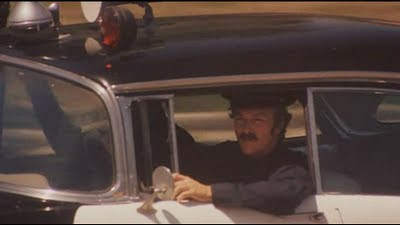 Two of the more amazing people in the film would have to be Christina Ricci as a prostitute and Sandra Bernhard as a burlesque dancer. Ricci has this large, curvy sensuality that has fallen by the wayside with her new slender look. She was being a prostitute. From her behavior to her wardrobe down to everything she did. You forgot that she was Christina Ricci and that she was a whore.
Sandra Bernhard. Ah, Sandra. See, I've seen a lot of stuff that she's been in. I think she can be funny, creepy, anything but sexy. She never strikes me as a sexy being in any way shape or form. But, then she did this. The woman exudes a raw sexuality that makes you stand up and take notice. You can't stop looking at her and you like what you see. It's amazing to watch.
I find it hard to believe that this film isn't more famous. The director only made this one flick and that was it. I always assumed it was a alias for Billy Zane, but I'm not sure of that fact. 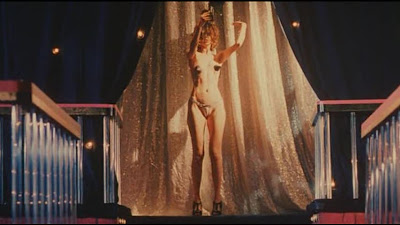 In the end I WOKE UP EARLY THE DAY I DIED is an excellent example of what can be done with film.
Unfortunately, the only trailer I could dig up is shitty. I'm including it anyway.

Posted by Douglas A. Waltz at 4:46 PM No comments: