I leave you with this;

Posted by Douglas A. Waltz at 2:25 PM No comments:

I have watched the trailer for Red State.
Let me say this;
I love Kevin Smith movies.
I love
CLERKS
MALLRATS
DOGMA
CLERKS 2
JAY AND SILENT BOB STRIKE BACK
CHASING AMY
JERSEY GIRL
That's right, I loves me some JERSEY GIRL, got a problem with that?
Then came ZACK AND MIRI MAKE A PORNO.
Didn't like it. Seemed unfinished and thin as Hell.
Never watched COPOUT.
Now I have seen the trailer for RED STATE.
Yeah, gonna have to pass on that as well.
I miss my funny Kevin Smith.
IF anyone sees him could you tell him that I miss him and wish he would make more funny movies.
Thanks.
I'm going to go watch CLERKS again.
Posted by Douglas A. Waltz at 7:19 AM 2 comments: 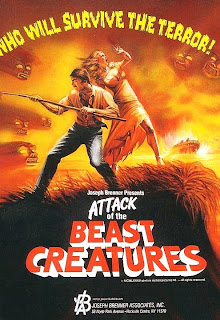 I have no idea why I decided to watch this flick. There are multiples web sites warning you that this is a bad movie. I've seen bad movies.
This ain't one of them.
Sure, there is a little padding of the people walking around the island, but I am getting ahead of myself.
First, the plot.
Seems a cruise ship goes down in the ocean in 1920. A lifeboat makes it to an island in the North Atlantic. Why the North Atlantic. I could tell because of the greenery, but I'm sure that it had something to do with it being a low budget flick and everyone lived in Connecticut. 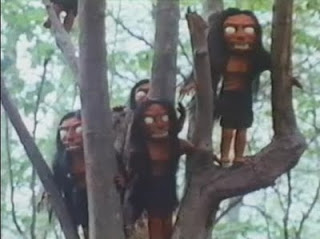 There is one wounded guy who becomes monster chowder pretty early on.
I mentioned the monsters, right?
No, well they are bright red, have white eyes and are eight inches tall. That's right. Eight INCHES. But these little buggers can run like the dickens, have sharp teeth and there are hundreds of them. Add to that the fact that the island has a couple of pools of water that look inviting but are filled with flesh liquefying acid. Yeah, things start looking pretty dire for our folks. 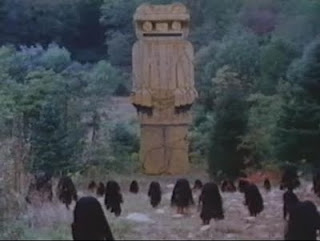 I think that the puppetry in this film was some of the best I have seen with what they were working with. It is awesome to see these little guys leap and run and bite the Hell out of these poor souls. It's a lot of walking, getting attacked, rinse, repeat. But you know what? I'm pretty sure that's what would happen with a boat full of people on an island with some murderous little sumbitches. 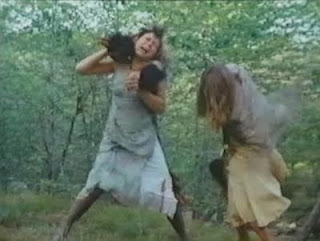 ATTACK OF THE BEAST CREATURES might well be the best island full of monsters movie ever made in Connecticut. Heck, maybe even THE WORLD!!!
Attack of the Beast Creatures

Posted by Douglas A. Waltz at 6:31 PM No comments:

So, I watched Meatballs the other day. I'm a big fan of the teen/camp flicks and watch a lot of them. I decided to watch one I had never seen before and one that I remember from my youth. 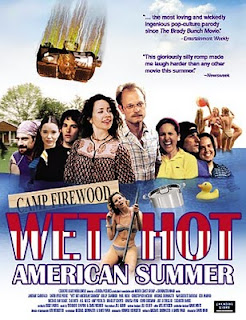 First up is WET HOT AMERICAN SUMMER. I thought I would have it made with this flick. I like Janeane Garafolo. Elizabeth Banks is pretty. Paul Rudd is funny. This was a win win situation, right?
Yeah, not so much.
It takes place on the last day of camp in 1981. The objective is to hook up if you haven't had the chance for one last summer fling. Also, a piece of Skylab is headed straight for the camp. Pretty basic plot which, if done correctly, can make for a million laughs.
This one not so much. A lot of it just felt flat and boring. Unfunny abounds. Plus, where is the naked??? IF it's supposed to be a raunchy teen camp comedy then there had better be some damned boobies. Yeah, none.

This worried me as I plugged in a blast from the past.
PINBALL SUMMER also known as PICK UP SUMMER. 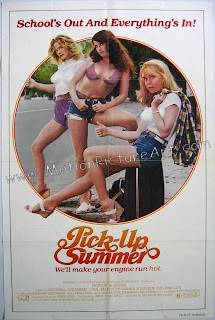 I saw this film as the first half of a double feature at The Portage Drive-In. The second feature was SWITCHBLADE SISTERS and any double feature with that in the line up is going to be burnt into your brain. I found a copy under the title of PICK UP SUMMER and thought it would be fun to see how I remembered it.
PINBALL SUMMER follows the adventures of Greg (Michael Zelniker) and Steve (Carl Marotte). School is over and it's time to cut loose, have some fun, chase girls and win a pinball tournament. The girls are sisters Donna (Karen Stephen) and Suzy (Helene Udy) and they like giving the boys a hard time. Add in a tiny motorcycle gang led by Bert (Thomas Kovacs) and you have the recipe for a fun little film.
The movie exudes small town. Shot in Canada it looks significantly different than they plethora of teen comedies that live on the California Sands. You feel like you are in this little town, sharing madcap adventures with the cast of characters. 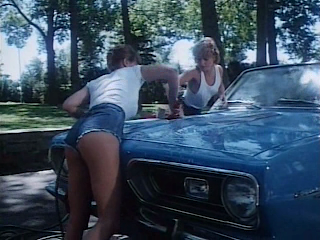 To be honest, there are two scenes that replay in my head after seeing the film once. And they were stuck in there for decades. One is the group of teens driving in a vehicle with the pinball trophy. Check. That looks exactly like I remembered it so that synapse is still functioning properly.
Then there is a party at the girl's house where they play strip pinball. The hot girl in the film, Sally (Joy Boushel) in a leopard print bikini is playing the pinball machine topless. I still see the memory in my mind. rewatching the film showed me how much teenage hormones can affect memory. I recalled her having much bigger breasts. Don't get me wrong, they are magnificent, but I just added a couple of cup sizes. 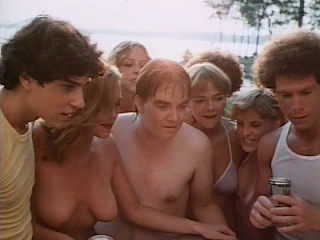 In the end the kids win the tournament. The girl becomes Miss Pinball and all is right in this little world.
This is what I would call a good, solid film in the teen comedy genre. There's your goofy antics, tons of gorgeous girls, nudity, wacky characters and some sweet pinball machines.
Speaking of pinball machines;
The end of the film with the tournament has the two players, Bert and Greg, playing a machine that is modeled after the movie. It has the title of the movie on it and the kids from the movie are on the machine!
What kind of bizarro world stuff is that? Beats me, but it just adds to the fun as far as I'm concerned. 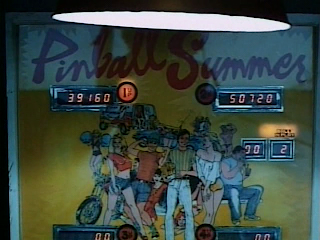 So, while WET HOT AMERICAN SUMMER was a monumental failure, PINBALL SUMMER was all that I remembered and more.
Now, excuse me I'm gonna go watch it again.

Posted by Douglas A. Waltz at 6:51 AM No comments: 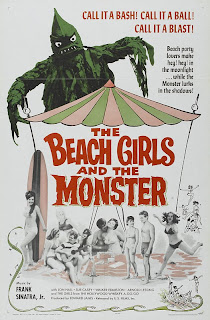 I think I watched it because I had just watched The Monster And The Stripper and I wanted to see if the Beach Girls fared any better. A black and white low budgeter from the 60's directed by Jon Hall and filled with surfers, dancing girls and tunes by Frank Sinatra Jr.
I thought the monster was cool and towards the end I got what the twist was going to be. I'm not going to spoil it for you if you haven't seen it.
The thing that made the biggest impact on me was the professor's house. My God! It was big, beautiful and ultra cool. Huge rooms, a giant fireplace and the bar! My God, the bar! It had more glassware than an Applebee's and you knew that every liquor known to mankind was in that thing.
That is the house for me.
This was definitely a fun little flick that I can see myself watching again even though I know the ending.

Posted by Douglas A. Waltz at 5:09 PM No comments: 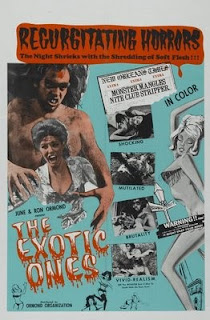 Also known as The Exotic Ones, this is one of the Ormonds classics. Who are The Ormonds you may ask? The husband and wife team of Ron and June made pictures that would amaze and shock you, but none more than this little epic. 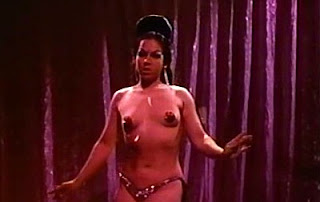 Seems there's this strip club in New Orleans called Nemo's. Nemo's has the best strippers in town and everyone knows it. But, the place ain't making no dough. That's when they get the idea of going into the swamps to capture this swamp creature that is tearing up the locals and their livestock. They hire a local named Tim to help them and they get the beast into the club. 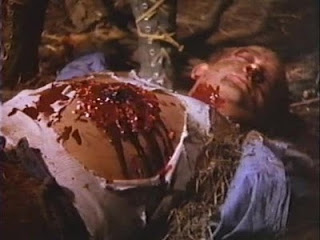 All good things must come to an end when the beast escapes.
Sounds a little like King Kong doesn't it? Yeah, then The Ormond touch comes along and gives you things you would never believe. Their headliner stripper Titania is a flexible, fire eating force of nature kind of girl and she isn't real happy with the new talent that Nemo has hired. The Monster isn't real fond of Titania either and lets her know it when he finally escapes. 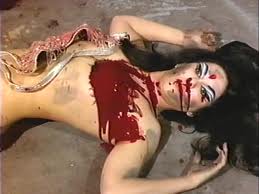 For a flick made in the 60's this one takes gore to a pretty good level. You see a man get his arm ripped off and beaten to death with it. Titania loses a boob in a bloody mess. Nemo gets his head crushed. There is also a gutted and decapitated calf and The Mosnter rips a chicken to shreds, but neither of those are special effects. The chicken death hearkens back to the carnival geek days and is pretty gruesome.
The beginning and end of the film shows New Orleans with a narrator that sounds like it could have come from a Russ Meyer flick.
Throw in loads of bottom heavy girls with pasties. A really great cat fight and a man playing the biggest harmonica I have ever seen and you know that you are dealing with a classic of cinema.
THE MONSTER AND THE STRIPPER is a must see for any true fan of exploitation cinema. Either watch it or we take away your film lovers card!