So, here I am at work. It's not busy so I decided to surf the internet and see what was on the news. Went to CNN. There was the horrible California shooting. I saw one of those year in pictures thinghs and clicked on it.
Big mistake.
There was a shot of a small two year old boy, a Syrian refugee washed up on the beach. People walking around and leaving this poor child face down in the sand and the first thing someone think of is to take a picture?
Yeah, you call it news. I'll still with the destruction of human decency and leave it at this.
You win Internet.
I quit.
I'll just write my stupid little books. Publish my stupid little mini comics and zines. I need the Internet for those, but that's it.
Goodbye.
Divine will still print on a quarterly basis you can reach me at dwaltzwriter@yahoo.com
Posted by Douglas A. Waltz at 5:47 AM No comments:

NICK CARTER: THE TERRIBLE ONES 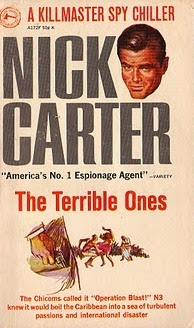 This time around Nick is sent to the Dominican Islands to help a group called The Terrible Ones and stop a plan by the Chinese called Operation Blast. When he finds out that the Terrible Ones are actually the wives of all the men who were killed by the current dictatorship Nick finds himself in a difficult situation compounded by finding love in the last place he expected.
This was a pretty good read. It was action packed, lots of battle scenes and a steamy love scene for Nick, of course.
Here's the odd thing.
This is the fifth one of these books I have read.
In that small sampling of books I have already encountered two, bestial, half human rape monsters.
IS this a thing? Does every foreign bad guy have some shaved gorilla rape monster in their aresenal?
We shall have to wait and see.
I will keep you informed.
Posted by Douglas A. Waltz at 5:57 AM No comments:

So, I sorted through my grocery bag of Nick Carter to get rid of all the ones told in first person. Just a personal preference and I don't like them.
There were a lot.
I may reconsider, but for now I have about a baker's dozen of them told in third person.
TEMPLE OF FEAR is a pretty gruesome tale. Nick's boss, Hawk is hired  to eliminate a double agent that ran to Russia to escape persecution. Apparently he will be in Japan to assasinate the Emperor, but no one knows that.
In the meantime, Nick is visited by four undercover, Japanese Girl Scouts who are charged wit bringing Nick back to Japan to repay a debt of honor. And, no I am not making this up. Sure, they turn out to be hot, Japanese women, but it's still pretty funny.
Now Nick is off the grid, weaponless and working under the assumed name of a dead journalist who is offered the biggest news story of all time.
If he can live long enough to complete the assignment.
This was a lot of fun. The author decided to make the Oriental bad guys just the worst kind of human beings with no regard to life. The sickest thing is when Nick, locked in a cell is delivered the head of one of the girl scouts and he uses the oil in her hair to slip his handcuffs off to escape.
That might be the coldest stunt I have seen Carter do so far.
I have noticed that the books all seem to move at a leisurely pace until there's about twenty pages left. Then it's like the writer said, 'Whoops! Hitting the word count limit, better wrap it up!" It goes fast.
This was a pretty good entry in the series.
Posted by Douglas A. Waltz at 9:45 AM No comments:

The film opens with Greg (Greg Fuller) using an experimental penis enlargement cream invented by his mad scientist roommate, Dick (Bill Zebub) It makes his penis clay like and when Greg shapes it for some unknown reason into a pink shark it becomes sentient and bites off his fingers when he tries to use the bathroom. His girlfriend shoots it in a panic and the dick shark falls into the toilet and makes its way into the water systems.
Where it begins to mutate.
Soon, it attacks various women and Dick is on the move to find the beast and see what has become of it. As more and more women are assaulted by the beast who has adapted so that it can fly, Dick realizes that this new life form may be more than mankind can handle.
Thus begins the epic three hour movie cleverly titled ‘DICKSHARK’. Those, like myself, that are used to the works of film maker Bill Zebub find this to be a normal title from the film maker. After all, this is the gentleman who gave us the film ‘ANTFARM DICKHOLE’.
And, like many of his films, the Dickshark is the central idea of the film, but that is never enough for Bill Zebub. As he fondles the many victims of the dick shark rapes he discusses things like religion, Santa Claus, life and death and discrimination.
John Giancaspro as Colin Ebsary, plays a rival who is attempting to steal the secrets of the monster for himself for selfish reasons and sends his girlfriend, Vanna (Erin Brown) to Dick in an attempt to sway him with sex and love so that she can bag the creature. When another of Dick’s experiments gets loose and kills Vanna, Colin is heartbroken and unable to continue with his miserable life where he thinks all we do is eat, sleep, piss and shit our existence away.
Bill Zebub gives us some haunting imagery and a metal score that we come to expect from one of the true masters of the exploitation field.
Don’t let the three hour run time dissuade you to watch one of the best, original films being released today.
Intelligent, scary, heartbreakingly sad and funny as Hell DICKSHARK shows us that Bill Zebub can take a one note joke and turn it into something g wondrous to behold.
Posted by Douglas A. Waltz at 11:57 AM No comments:

So, some of these are written in first person? I know I'm new to this series, but that seems like a horrible idea. I'm not reading this one. Now I have to go through each book before I read them. Yeah, just seems like a bad choice for Killmaster.
Bummer.
Posted by Douglas A. Waltz at 5:22 AM No comments:


When I grabbed this one out of the paper bag for my second foray into the land of Killmaster I had no idea that it was the first book. That being said, it does not feel like a first book. We get the standards about his three weapons but I've seen more detail given in a later book. It's a little gruesome with planes exploding, a guy exploding at the airport and a master assassin named Judas who is a misshapen monster of a man that seems to be a worthy adversary for Nick Carter. I was amazed Judas got away.
I was considering trying to read these things in some semblance of order, but I do not have all the books and doubt I would spend more money tracking down the holes in my collection. I think, for now,  I'll just reach in the bag and see what happens until I reach the bottom.
Should be fun.
I would like to see if his relationship with Julie, another spy from another secret agency goes beyond the first book. They seem pretty serious.
She probably gets shot in the next book.
Posted by Douglas A. Waltz at 1:45 PM No comments:

Dick (Brian Papandrea) wakes up with what may be the worst hangover ever. No matter how much water he drinks, he is still thirsty. Wakened by a phone call from Suzy (Emily Hilborn), she invites him over to her house for beer, movies and maybe, if he’s lucky, a repeat performance of what they shared a few nights ago.
Everything is looking pretty good for Dick.
Well, except for his penis.
He uses Suzy’s bathroom and it looks like it’s been through a shredder. Even when he tries to pee, it comes out of the wrong place and drenches him.
It seems the hookup from last night was more than he reckoned with and now he has a thirst than can only be quenched by blood from Suzy’s crotch???
Now they are both cursed with the thirst and need to feed from others crotches no matter what.
And, for some reason, their intelligence levels seem to be dropping.
This is no normal case of vampirism.
As they will both soon find out.
FANGBONER, the directorial debut of Nathan Rumler mixes together a vicious soundtrack, the sensibilities of a lovechild made from the unholy union of Andy Milligan and H.G. Lewis and a healthy dose of slapstick humor.
In other words a film that will be hard pressed to fins a single genre to call its home.
This is a good thing. This is the thing which midnight movies are made of. And FANBONER deserves a place with them.

Brian Papandrea brings this weird, Iggy Pop manic energy to the role as Dick, the guy who thinks with his dick and it gets him into the most trouble inhumanly possible. The film gives a small vibe as to the perils of unsafe sex; even a blow job can be deadly if you stick your penis in a monster’s mouth. Even if she’s as pretty as Sheri Darling.
The true stand out of the film would have to be Emily Hilborn as Suzy. The pink haired cutie who just thought that she and Dick might have something more, until she gets cursed with the same unnatural thirst and they need to kill to stay alive. She brings a sad vulnerability to a girl who just wants to date a nice guy.
The problem is that Dick really isn’t a nice guy.
The film packs a one two allegory punch when they discover the highly illegal cure for their deteriorating mental condition. Even though the cure could cause more damage in the long run they embrace the means to restore their intelligence.
FANGBONER embraces old school gore effects, loud music for the soundtrack and gives us a throwback to the days when you went hunting through the mom and pop video stores of old. You’d find that big box VHS with the cool artwork and you’d take it home in the hopes that it would deliver the goods.

Sometimes it did. Sometimes, well, you know.
FANGBONER delivers.


Oh, and the title? As a constant attendee of the best convention on the planet, Cinema Wasteland in , we pass it coming and going. It’s the name of an actual road in . Suzy lives there.

Posted by Douglas A. Waltz at 8:10 AM No comments: