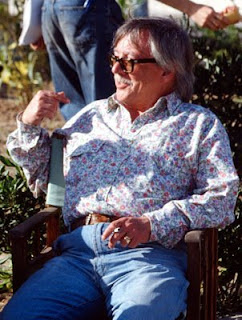 I cannot believe I forgot that yesterday was the maestro's birthday?! Jess Franco is probably one of the biggest influences on the way I look at things. His films make me look at the world in a different way and I enjoy all of them. Anyway, here is to a fabulous birthday for Jess and to many more!
See, this never happens with Lina Romay because we have the same birthday. Oh well. I'm a slacker. Forgive me.
Posted by Douglas A. Waltz at 4:17 AM No comments:

A while back I decided to put ad space on this blog. I did this through an amazingly easy program called Project Wonderful. And the ads flourished! Well, they flourished because you could get ad space for free. after a few weeks of meager profits and a lot of free ad space I decided to up the ante and charge a measly two cents a day for ad space. I figured that people would jump on that bandwagon. Yeah, look at the banner next to this and tell me how well that went. I don't think that two cents is a horrid price to pay for being here. Especially since I don't tend to show any biad towards any advertiser. I could care less as long as you pony up the two cents a day. Seems reasonable, right? Right! Oh well, I guess I'll bur the ad banner down a little further on the page and put the people I really like a little further up on the totem pole where they belong.
I'll be back late with some more of the weirdness that is Divine Exploitation.
Oh, and the word 'chimerical'? Awesome word and you should look it up and use it in a sentence from time to time. You'll be glad you did.
I gotta go.
Posted by Douglas A. Waltz at 4:19 AM No comments: 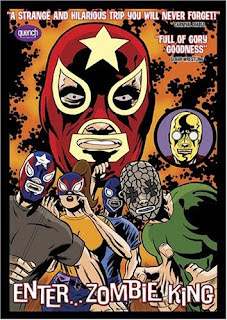 
Ulysses is our masked wrestler hero. Looked up to by millions he finds himself cruising a lonely stretch of road. He comes upon a secluded gas station that has the bare necessities of life. Beer, cigarettes and all seven kinds of jerky. Throw in a full tank of gas and it's more than enough to make any luchadore happy. Unless, there are hordes of flesh eating zombies on the prowl and the weather is acting strange. Ulysses realizes that he'll need some help. Mainly the gorgeous Mercedes and her temperamental brother, The Blue Saint. That's right, they wear the masks as well. The trio go to look up an old friend, Tiki, who specializes in wrestling zombies. Quite possibly the most dangerous kind of wrestling there is. It's during one of these matches that a waitress gets eaten. Everyone blames Tiki and his trailer full of the undead.

Little do any of them realize that the murder was the fault of The Zombie King and his psycho sidekick, The Murderlizer. It might be interesting to note that The Murderlizer does not wear any form of mask. Unless he's masquerading as The Blue Saint. Ulysses soon realizes that the group is in way over their heads and calls in a favor. Mr. X, the masked wrestler of Wall Street, along with his yacht of naked crewmembers enter the fray. Now it is the forces of good vs. evil and to make matters even more complicated the evil is one of their own! 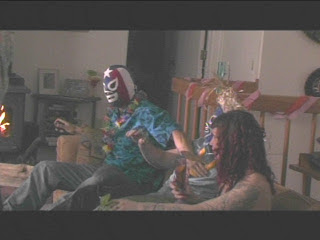 ENTER... ZOMBIE KING is without a doubt the best thing I have seen in this new year. Stacey Case needs to be commended for flawlessly blending the aspects of Mexican wrestling, retro comics, zombies and pure exploitation. When I received the screener for this the box art leapt out into my face. Pure Jack Kirby style that would have made The King proud. As if that wasn't enough the masked wrestler aspect is phenomenal. It's also a great cost saving device. If someone flubs a line you can dub it in later and not worry if it matches. No one can tell what these guys are saying under their masks. And if you thought that was impressive, the storyline mentions that the weather has gotten truly bizarre. One day it's snowing, the next it's clear as day. Another ingenious money saver. It doesn't matter what the weather is like when you're doing your shot. The story takes care of all the inconsistences that plague other features. I'm truly surprised that no one has ever thought of this before.

The image is beautiful, making use of a new video system that actually looks like film. Plenty of women that are easy on the eyes. Mercedes is clad in a skimpy, girls school outfit for most of the film and is just incredibly hot. Each masked wrestler brings their own attitude to the proceedings. My favorite would have to be zombie wrestler, Tiki. The gore flies freely throughout the picture and is done very well. And with that you would think that would be enough. Right? 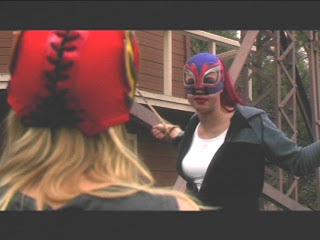 Wrong! True music lovers can also rejoice as the soundtrack is filled with the likes of The Tijuana Bibles, The Sadies, The Blue Demons, Sinking Ships and The Exploders. A true garage band festival that propels the action on the screen forward in a a mad, fevered rush. It was especially nice seeing The Tijuana Bibles perform in the flick, what with them being masked music men.

After watching this film a couple of times I came to realize that it was fantastic, but I knew that it would be one of those things that no one would see. Then I went to Best Buy to see what was on the racks. I get a lot of Something Weird titles this way, believe it or not. Anyway, I'm trolling through the aisles and what do I see? That's right, boys and girls! Three copies of ENTER...ZOMBIE KING! And this is in the wilds of Michigan no less. It gave me a warm, fuzzy feeling to know that this flick was out there on the shelves for the consumer to discover this gem.

My only regrets concerning the film are these:

One, there are no extras on a disc that screams for them. Music videos, behind the scenes, you know, Stuff!

Two, no action figures. I really need a Tiki and Zombie King action figure. My seven year old, who watches this film on a regular basis wants them all. Who knows, maybe sometime in the future.

So, what are you waiting for? I told you this was out in the stores. Go get ENTER... ZOMBIE KING and treat yourself to a truly original, hilarious film. You won't be sorry. You might go out and buy your own wrestler mask, but you won't be sorry.
Posted by Douglas A. Waltz at 2:49 PM No comments: