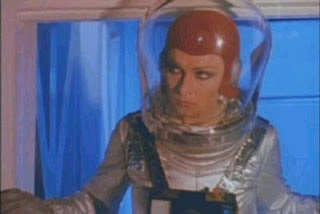 Blame Star Wars. After the success of that minor, little film, the space opera genre went berserk. This is one of the More horrifying examples of that particular sub genre. The basic plot is that these Fabio look alikes in silver lame' kidnapped a professor and his lovely assistant. They send a squad of people after the aliens to get the professor back. Our captain really wants the assistant back as he has the hots for her.
When they get to the planet to rescue them the last thing they want is rescue. Seems the professor is ruling the planet with the assistant who is now the empress. (???) Not a lot of explanation is given. We are given dog fights in space with some of the worst animated laser blasts known to mankind. When the crew uses blasters we hear a noise, but don't see anything. There are these funny, day-glo swords that try their damnedest not to look like lightsabers and have metallic clinky noises when they strike anything.
The whole thing is a certifiable mess. Even Antonio Sabato Sr. (No, not his son, that's a completely different guy) can't save this mess. The running time said 77 minutes. It felt like four hours and it just kept dragging on. Perhaps director Al Bradley, really Alfonso Brescia, has discovered a way to slow down time.
All in all it was just no fun and kind of painful to watch. I really doubt I will ever watch this again. Ever!
Posted by Douglas A. Waltz at 10:56 AM No comments: 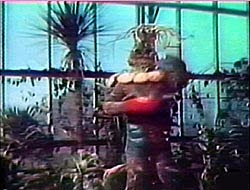 Also known as The Double Garden (What a lame title for a flick!) and a slew of other names, The Revenge of Doctor X is the one that was on the disc so, that's the one we're going with.

Dr. Bragan (James Craig) is a scientist for NASA. He has burning both ends of the candle for so long that he is frazzled. His assistant suggests that he take a trip to Japan to study his passion, botany. On the way to the airport he has some car trouble. The guy that runs the nearby station happens to raise snakes, but it isn't the snakes that interest our good doctor. He spots a venus flytrap. The station owner isn't interested in selling the plant, but hands the Doc a shovel and a box to get his own plant.

Doc takes the plant to Japan and sets about splicing it into a monster with another plant that exists only in Japan. Lucky thing he was vacationing there, huh?

Did I mention his female assistant? Nice looking oriental woman. The film has a few of those. When the Doc goes scuba diving he gets the help of a bevy of topless pearl divers. Really the high point of the film.

See, this doesn't sound so bad, does it? Unfortunately, the movie drags. It takes more than half the flick before he even starts working on the damned monster and when he does, it is laughable at best.

The true winners of this flick would have to be the aforementioned naked women and the lead actor. He screams and shouts most of his lines. And with a script by....ready for it? Edward D. Wood Jr. That's right, good old Ed Wood penned this train wreck of a flick and in the hands of director Kenneth G. Crane (Monster From Green Hell) it doesn't get much better. I remember catching this on an afternoon when I lived in Plymouth, Indiana. It seemed a little better at the time. I must have been drinking. 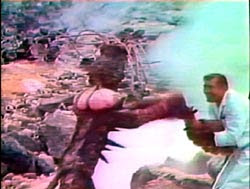 Posted by Douglas A. Waltz at 6:22 PM No comments: