Part of the anthology, Weird Crime Stories, which can be purchased HERE. Tells the tale of crime fighters Rock Savage and Dr. Anubis as they discover a group of Fourth Reich Nazis developing a bizarre breed of Rape Gorilla!
This is a pulpy throwback to films that are a lot of fun. Currently you can watch it HERE at Count Gore DeVol's website, but it will be gone soon. Why not order the DVD and you get three more shorts to go with it. How can you go wrong?
Answer: You can't.

Check out some mad beats from the Count his own self!

Posted by Douglas A. Waltz at 4:31 AM No comments:

Over the years I have professed my love for all things Something Weird Video. They put things out that you will never see anywhere else. My one time trying to contact them they were assholes, but I have put that behind me and continue to enjoy their product.
This time it's a triple bill of kink with some extra kink as well.
Sit back and relax. This could take a minute. 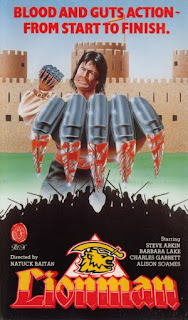 Or, it's original title ASLAN ADAM, LIONMAN tells the tale of a King who's kingdom is overthrown just as his wife has gone into labor. He manages to stop the hordes from following her long enough to give birth in the woods, but it is too much for her and she dies. Her child is raised by lions and he becomes the Lionman of legend.
Soon, his path crosses with the evil king's son and they develop a bond regardless of what has happened.
Then the truth is revealed and along with a band of rebels they attack the evil king, bent on destroying him and wrestling control of the kingdom that he stole so many years ago/
I was rereading the awesome Pete Tombs book, Mondo Macabro and thought this looked like something right down my alley. You know, a dark, seedy, foreign kind of alley.
I couldn't have been more right.
The lead Lionman spends more than half of the movie saying nothing and kicking ass. He didn't know how to talk until the pretty rebel girl teaches him. His claw like hands shreds the faces of all who oppose him.
I have to say that there is so much action in this movie. Lionman spends most of it springing through the air and you only really see the trampoline once.
It doesn't ruin the fact that this movie just goes and goes and goes. The final battle scene I swear he slaughters hundreds of guys. Or the same eight guys a lot. The blood flows, Lionman leaps through the air and vengeance is achieved.
If this is any indication of my journey through the madness of Mondo Macabro and it's pages then I am in for one heck of a ride.

The other day I was on my way to work. I take the bus because gas is way too expensive and would eat into my comic book and movie money. Anyway, there was, for the longest time, a Burger King in downtown  Kalamazoo.
Yeah, it's leveled. 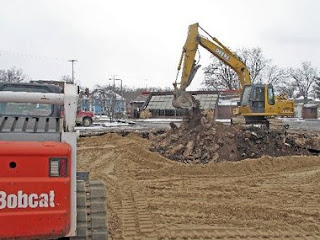 This is the Burger King where someone spotted Elvis many years after his death. Kind of a big deal, but the guy who owned the franchise died and no one wanted to take it over. They have another one over off I-94 and it is creepy looking with all the furnishings still inside and the big piece of sheet metal that was under the Burger King sign shakes and makes the worst noises on a windy day.
Yeah it's by the bus stop where I get to work.
But, that wasn't too bad.
Martha and I were driving down Gull Road from Meijer when I spotted the huge pile of rubble that had been the East Towne Mall.
That one hurt. 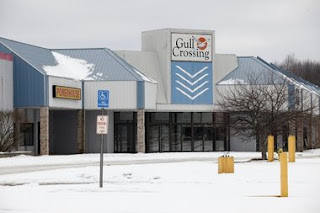 I spent a lot of time at that mall. They had a 5 plex theater where I watched a majority of my movies. The mall had an arcade. They had a Tom Sawyer's Book Raft where I bought my first Doctor Who novelizations. There was a restaurant called The Final Curtain where they made the best French Dip sandwich and I even worked there for a while when I was younger.
This was my mall.
It has one of my favorite Dad stories. My dad would come and get us four kids and take us out on weekend
adventures afetr he and my mom got a divorce. We saw a lot of movies.
A lot of movies.
Anyway, we were walking down the mall and I had spotted something I wanted at the book store or some such thing. I ran up behind my dad and asked him for a dollar.
He said, 'A Dollar!' and clutched his chest and fell to the ground.
Priceless!
My family seems to find faking a cardiac arrest one of the funniest things in the world.
Now they have torn that down.
This sucks.
Posted by Douglas A. Waltz at 11:34 AM No comments: 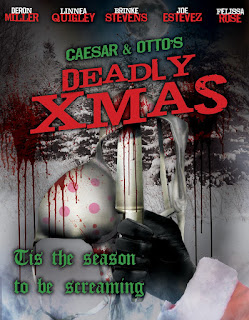 For those of you hiding under a rock, this is the sequel to the magnificent horror comedy Caesar and Otto’s Summer Camp Massacre (2009) Probably one of the funniest films I have ever seen. Now, after their skewering of the Summer Camp Slasher sub genre, Caesar (Dave Campfield) and Otto (Paul Chomicki) are doing the same to the Santa slasher sub genre.
Did you know there was such a thing?
Oh, yeah and most of them are pretty funny. Silent Night, Deadly Night (1984) is probably the most infamous of the bunch and this film has no problem making fun of all of them.
The film starts with a typical Caesar and Otto moment; trying to find an acting gig. Caesar is offered one, but his fear of Santa due to childhood trauma prevents it. Otto has been dreaming of his high school sweetheart and is on a quest to find her and make her his again.
They get work with a group that is trying to spread the good word and Caesar notices they have a lot of film equipment lying around. He convinces them they should make a Santa slasher flick to make more money and then it is on.
Add in an actual killer in a Santa suit and it gets weird from there.
Caesar and Otto’s Deadly Christmas is so filled with references it will take multiple viewings just to get them all. Luckily the movie is hilarious so that isn’t a bad thing.
Throw in cameos by Brinke Stevens, Linnea Quigley, Robert Z’Dar, Joe Estevez and Lloyd Kaufman and you get what will surely be a classic for the Christmas season every year.

Posted by Douglas A. Waltz at 4:57 PM No comments: