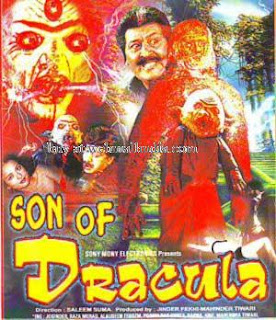 Because of Tim Paxton I became more curious about the Bollywood movie experience. Sure, I had seen a couple of them through the years, but now it seems to be turning into more of an obsession. Along with Mexican Monster movies, but that's for Weng's Chop, not here.
So, Son of Dracula. Seems there is this asshole landlord and Dracula sends his women after him to get him to have sex with them. One succeeds and gives birth to a little vampire that will destroy the landlord's family.
I managed to find a copy that has the last half with subtitles. Thank God because I would have had no idea what was going on. The Dracula in this is a huge monster with spooky lighting and can shoot rays out of his eyes. His son does the same thing and it makes policemen's clothes disappear. (Yeah, not sure either.) The little guy is funny because half the time he is an obvious dummy and the other half a little kid.
The movie is insane and moves at a breakneck speed with plenty of dance numbers. I felt bad for one of the brides of Dracula who had to dance under a tiny waterfall for the entire number. She must have gotten soaked with the length of the number and assuming they got it in one take.
This reminded me of being a youngster and watching all those Saturday afternoon monster movies. Such a good time. I found a copy of Dracula and will have to see how it compares. This one throws everything at the screen and doesn't care if it sticks or not.

Here's the first part of the flick. You can watch it all on YouTube.

Posted by Douglas A. Waltz at 5:29 AM No comments: 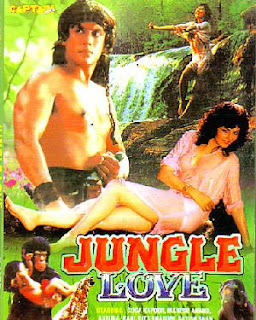 Normally, I don't like watching movies where I don't speak the language and there are no subtitles. Lately, I have been watching a lot of Mexican horror movies for an article for Weng's Chop and a lot of them do not have subtitles. It seems to be working for me. You kind of shut a little part of your brain down and appreciate what is happening in front of you. It requires more concentration coupled with some interpretaion, but I do like it. My friend, Tim Paxton, is hooked on the Bollywood flicks. I have seen a couple thanks to Mondo Macabro and thought they were fun.
I tried to watch a drama on Hulu and after an hour was just bored to death.
Then I watched Jungle Love.
So much fun!
It is a direct rip on the Tarzan myth. Kind of. Apparently, the child was born in an Amazonian society and they put him in a raft and sent him down the river. Luckily a midget in a chimpanzee and a lactating lioness found him and raised him to be one with the jungle.
Along come some mercenaries after Amazonian gold and Tarzan falls bad for Jane. In this case it is Raja and Rita. Still, they do like one another.
I love when they break into song throughout the film. It gives the entire proceedings a surreal quality you don't find here in America, or a lot of other places.
I figured out what was going on with the film and thought it was entertaining.
I think I likes me this Bollywood.

Oh, and here is the whole thing for free on YouTube. CLICK ON THIS
Posted by Douglas A. Waltz at 4:59 PM No comments: 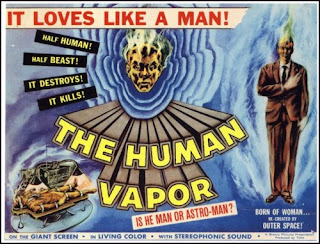 I haven't watched this in forever and when a subtitled, really gorgeous print made itself available to me I thought it would be fun to revisit.
Man, I couldn't have been more wrong.
Don't get me wrong the movie is great, but it's just so damned sad.
The lead fella is turned into the title character so he can survive the travels of space. He is able to become vapor at will. when he kills his creator he becomes obsessed with a dancer. He robs banks so that she can dance again. And I mean pretty, Japanese dancing not that go go, stripper kind of dancing.
When she realizes what he has done she decides to help the police destroy the Human Vapor. They pump the theater full of gas that, when ignited, will destroy him.
See, I thought they could use something like a high powered vacuum or freeze the vapor or something like that, but no alternative idea is even brought up in the movie.
I felt so sorry for the dancer. All she wanted was to do this ancient, beautiful dance, but she was funded by a madman who had fixated on her. Why? Yeah, we never get a real reason for that.
The movie itself is really good, but not your typical sci fi romp of the sixties.
If you're looking for something to fill that 60's Creature Feature vibe you might want to look somewhere else. I really like the movie, just not in that way.

AND NOW FOR AN ANNOUNCEMENT!!

It has been 25 years since I started Divine Exploitation in zine form. With that many years of reviews, interviews and mindless ramblings I felt it was time to start a book. So, this year be on the lookout for ...
DIVINE EXPLOITATION...THE BOOK!!

Should be fun.
Posted by Douglas A. Waltz at 3:43 AM No comments: 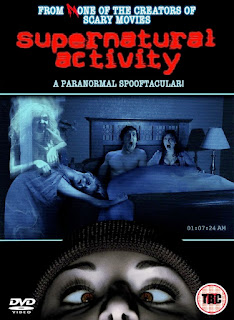 I have flown by this title so many times on Netflix that I have lost count. It looked a Paranormal Entity rip off and I don't like those movies. Let's be honest here. If I don't like something it sure as Hell ain't gonna show up here. Right?
Then I saw the word that told me to let it play before my eyeballs.
Spoof.
I do loves me a good spoof and when my daughters said we should try it out. I agreed. Especially after we had given V/H/S a try for about five minutes and turned it off. That thing stunk so bad I had to Febreze the television.
So, Supernatural Activity is a spoof of all those Ghost Hunter style shows with a leading man who comes across as a low rent Ben Stiller trying to channel a micro budget Criss Angel. He was pretty good at this. His show deals with debunking ghosts.   Demons. He believes in demons, no problem.
Unbeknownst to the rest of the team he also plans on going out with style by having the team visit a Indian Burial ground. His girlfriend, Blair wants to hunt down the legendary Smallsquatch that tickles its victims to death. He decides to show her there is no such thing.
He couldn't be more wrong.
Supernatural Activity has a lot of stupid, lowest common denominator laugh out loud moments. Funny stuff where you just turn off your brain and have at it. The movie skewers the ghost hunter type shows and makes sure to get in some shots at The Blair Witch Project and The Last Exorcism.
I think that's where it loses it's steam and starts to fail.
Too much time spent on The Last Exorcism. Blair Witch has had enough time to be funnier in this as is the television show stuff.
Also, it has the problem of many a spoof where it starts to slow down in the middle. That can spell death to a spoof. And, the end. Um, the end wasn't funny. It was like they got so involved in where they were going with this that they took it to it's only real conclusion that would work, but still not funny. Disturbing, yes. But funny, no.
They tried to fix that with funny, blooper stuff with the end credits, but it didn't help that much.
In the end, Supernatural Activity is passable, funny at moments, but falls flat at the end. All the actors were quite funny and the girl who plays Blair is wicked cute. The lead, Andrew Pozza as Damon Dealer is very good at what he is doing and does remind me of Ben Stiller (That's a good thing, by the way) and seems to be just starting out with this as his first film.
So, do you watch it? Sure. Like I said, some laughs and poking fun at stuff I find moronic. The perfect combination. And Liddy Bisanz as Blair? Like I said, wicked cute.

Posted by Douglas A. Waltz at 3:18 AM No comments:

Things change all the time. Sometimes, this is good. Sometimes, it is bad. I have had recent events in my life that while some may consider them bad I have gone the other direction with it. I remember many moons ago when I went to a Fangoria convention in Dearborn Michigan. Kane Hodder was there. Linnea Quigley was there. Sam Raimi and Bruce Campbell were there and Sam's brand new movie was Darkman.
I saw Dolph Lundgren's I Come In Peace.
It was a magical time when people didn't charge for autographs and all was right with the world.
Then the magic happened.
Someone gave me this little, photcopied zine called City Morgue. Created by Arpad Jasko it was the coolest thing I had ever seen.
I knew what I had to do.
It was 1988 and Divine Exploitation was born!
A print zine at first, when the Internet started becoming popular I had no problem converting to that. It was waaaay cheaper. every so often I felt the urge to print one up and would do so.
It was always fun and continues to be fun.
Now it needs to be like it was. An obsession. A thing I couldn't imagine a day going by without. It is, and always will be, what I like to do. Movies, TV, Games, Print, Art. Whatever I freakin' feel like saying. You can like it...or not. Don;t really care and won't pander. I did some pandering once and didn't like the fit.
So, that's it in a nutshell.
I'll see you all tomorrow morning.
Get ready.
This should be a blast!

Posted by Douglas A. Waltz at 3:27 PM No comments: