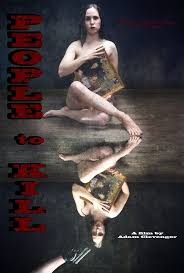 The film starts with a shocking murder. Mom (Cassandra Engber) is reading something on the computer nd it causes her to go into hysterics. She runs to the bathroom where it appears that she is chased by someone and then her throat is slit. Her husband (Geoff Burkman) comes home where his son's Vince (Vincent Holiday) and Shawn (Adam Scott Clevenger) have found the body.

Then we leap ahead five years to Vince and Shawn still at home with Dad. Shawn runs a local nerd mecca that caters to Star Trek fans. Vince is worried about coming out to Dad and Dad seems to be losing things. The third son, Mike (Mike Canestaro) is a priest at a church in a rougher part of town.

One of Shawn's bright spots of his day is bumping into Savannah (Erin R. Ryan) a local prostitute with a vicious pimp called White Ben (Noah Shane). One day after Sahwn saves her from being attacked by White Ben they become closer.

Then, in an act of violence everything changes. The tone of the film becomes one of darkness and revenge.  Shawn starts peeling away the layers of the situation and old family secrets are dragged out into the light. Shawn finally makes a decision for the first time in a long time and realizes the only solution in his eyes is to make them all pay, regardless of his feelings.

I bought People To Kill because I do watch everything that Erin R. Ryan is in. In the role of Savannah she is fascinating to watch. She manages to flow from sweet to manipulative and aggressive without missing a beat. You can watch the transformation in her face as it happens and it is breathtaking.

I loved the scene in the strip club with Marylee Osborne and Geoff Burkman. Just a hilarious scene between two actors with a wonderful rapport between them.

Director Clevenger, makes a movie where it starts violent, falls into a daily routine with a dysfunctional family and then transforms into a revenge film where you really never saw one coming.

Not a bad trick for a first film.

Usually, if you give me a movie to watch that is over ninety minutes, I can get bored easily. Sure, there are exceptions to any rule and I am happy to say that People To Kill is one of them. It did not feel like a two hour plus production and it is a great movie that deserves more exposure to the world.

You can pick up your copy at

Posted by Douglas A. Waltz at 6:48 AM No comments: