Does that phrase up there look familiar at all? I hear it used more in the realm of comic books, but it applies to lots of things; movies, TV, books, lots of things. I find, as I get older that more and more fictional things have this habit of running secondary story lines throughout their run. Some good examples would be the newest incarnation of Doctor Who. And being an old fart, I mean what started with Christopher Eccelston. I remember the old days when Tom Baker would show up, the monster would slaughter everyone except for him and his companion and they would be on their merry way. Good times.
Comic books were even better at having a single issue where the hero would have an adventure and that was it. No foreshadowing, nothing full of portents of things to come. Just a straightforward, well told story. Well, most of the time.
Now, with the Marvel Universe telling epics tales that require you to basically read everything they print and DC following in their footsteps by re imagining their entire mythology a few years back, it has gotten out of hand.
And do you know why they do it?
Collections.
If they have a string of stories they can put them all in one book and sell it for a huge profits. In hardcover no less. When did the fad for hardcover comic books start? Even the times I have bought a collection like Watchmen (Yes it was a series of individual issues back in the day) Or Moonshadow (Which was also a series of issues before it was collected) they were still softcover. We know they are comic books. It's fine that come out every month on newsprint. Although, I do like to see that printing and paper have come a long way and look great.
The newest incarnation of Doctor Who with Peter Capaldi showed great promise. An older actor bringing a little of the old school back to the character. Good stuff. Yeah, except for that undercurrent of something going on with this woman and a place called The Promised Land. Hey, Stephen Moffat! That idea that people want this sort of thing every season is so far off base it isn't funny anymore. Knock it off!
Sometimes you want to go to the news stand, or your kindle or that comic book store you haven't been to in forever and pick up a comic book to check in with the hero of your choice. They swing/fly/swoop in, fight a villain, have an adventure and, at the end of the issue live to fight the good fight another day.
Yeah, good luck with that.
Even some of the smaller publishers have this problem; Dark Horse, IDW, Image just to name a few. Now, being a huge fan of Godzilla, Rulers of the Earth I do like that it is the continuing series. Even they stopped the storyline and then went on with another one.
See, it's a tricky thing. Some things warrant the epic story line. Some don't. It just all doesn't need to be that way. Sometimes we just want the little moment with our beloved characters.
Understand?
Posted by Douglas A. Waltz at 3:59 PM No comments:

ATTACK OF THE KILLER OCTOBER POSTS!!!

I haven't done a daily post in a while and what better month to do so than October. So, starting October 1st until All Hallows Eve I will be doing a review every day of something. What? Not sure. It could be a movie, a comic book, a book, a breakfast cereal. I do whatever I want anyway, this should be no surprise to any regular reader. I encourage lots of comments and questions during the month to get a Halloween vibe going on the site.

And to my regular readers in the Ukraine; Stay warm and Stay Safe.

And finally, to put you in the mood: 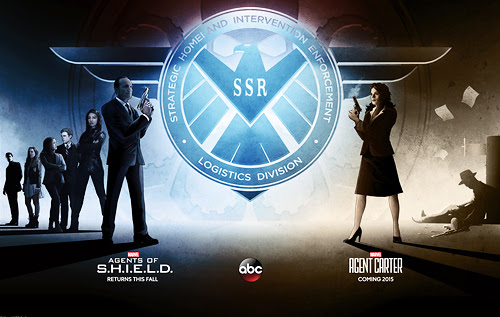 Being a big fan of the first season, I was pretty excited about the new season starting up. Thanks to the events of Captain America: Winter Soldier, things have taken a turn for the worse in this little corner of the Marvel Universe.
Also, last season left us with an agent turned bad guy, an agent robbed of his brilliance and the entire team forced into the shadows.
It starts with a flash back to 1945 and the Nazis finding an artifact of alien intelligence called The Obelisk. It isn't long before our cameo of Peggy Carter and The Howling Commandos starts up and they destroy the base and confiscate all of the artifacts.
Flash forward to now and our agents are trying to get their hands on whatever weapons and intel they can find. Things go wrong on a buy when a newcomer, impervious to bullets, takes the information and runs off.
We discover that it's a man named Carl Creel, more well known to us fans of Marvel as Crusher Creel, The Absorbing Man. And, yes, I was excited when this was revealed although I figured it out before they told us.
Later, we were rewarded with Creel grabbing a length of chain that had a huge ball at the end and then it was ultimate fan reward for those of us who care.
This was a good start to a new season. I do hope that they really don't try to redeem Ward. He doesn't deserve it. The end with a reveal that deals with Fitz and his brain injury from last season;s finale is heartbreaking.
This was a great episode.
Posted by Douglas A. Waltz at 4:33 AM No comments: