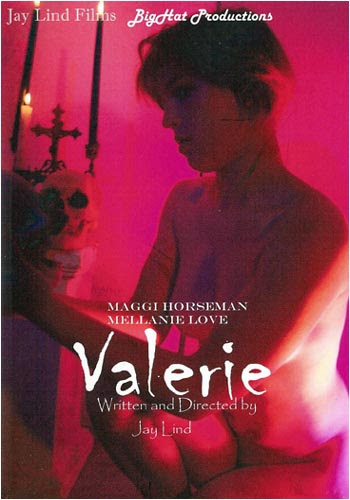 Editor's Note: This is not part of the box set that I am currently covering. Still, an excellent film.

Valerie (Maggi Horseman) has been the victim of a violent rape in her own home. To deal with this, Valerie has become submerged in a fantasy reality where she is a vampire. To reinforce this there are a number of people being murdered in the small town she lives in. The police are baffled and the body count rises. To complicate matters Valerie is slowly blossoming into womanhood and all the anguish that can bring. Her best friend Lori (Mellanie Love) is dealing with her own sexuality and adding to the confusion with her overtly sexual advances towards Valerie. Along comes Jack Sickert (Jay Lind) whom Valerie feels a true connection with regardless of the huge age difference. Unfortunately, the vampire fantasy is bleeding over into her reality more and more until it becomes impossible to tell which is which. The key to the problem is the identity of her attacker. Whatever happened Valerie has blocked the face of her attacker. The fantasy world has put the face of a malevolent vampire on the rapist. Valerie must go past the fantasy, force herself back into the situation which caused the trauma. She has to unveil her attacker and deal with it to resolve her conflict before the fantasy envelops reality completely. VALERIE is the newest film by underground sensation Jay Lind. A Jay Lind film is a personal thing. There are many themes that he explores over and over again in his cinema. Suicide, fantasy vs. reality, death, art. All of these things are what makes a Jay Lind film rise above the norm. VALERIE is no exception. A huge assistance in the telling of this tale is his newest discovery, Maggi Horseman. She manages to bring a mercurial quality to the lead. At one point she comes across as a sweet, innocent girl with a terrible burden. Then she shifts to temptress and then back again to innocence. She handles this effortlessly making the film an enjoyable experience. Director Lind brings a haunting quality to the look of his film. From stark reality footage to color washed scenes of fantasy. When the two worlds begin to collide you can see certain aspects of the film begin to shimmer uncontrollably. We are along for the ride when the lines between vampire and teenager begin to blur. The film even manages to rise above it's basic horror storyline. We get a pair of girls that are out of high school, but unsure of where to go next. Just yesterday they were little girls and now the world expects them to be women. Lori's sudden urges of lesbianism throw Valerie deeper into her vampire mode. Perhaps the most haunting images is at the dance studio they both frequent. One minute they are doing their stretches. The next they are in a deep blue world of undead dancers. It emphasis the fact that whatever secret Valerie has locked up in her subconscious is slowly driving her mad. As is common with any Jay Lind film he has filled it with gorgeous women, especially Ms. Horseman who is unclothed for a better part of the film. The music varies between a techno funk during bar sequences to a haunting melody reminiscent of the old Universal monster movies. As a whole the movie reminded me of George Romero's MARTIN which was probably a direct influence on VALERIE. This doesn't make it derivative of the older film. Just a different, very interesting take on a familiar theme. Director Lind once again gives us an engrossing, haunting, personal film that gives us a glimpse into his personal world. VALERIE is how a vampire movie should be. Character driven, fascinating and unforgettable. Okay, we get to start off with a small boy being chastised by a huge nurse. She tells him his mommy is dead and now she is forced to take care of him.
Flash forward to the decade like no other, the 90s, and we have women posing for the manic camera work of one Jack (Ross Hagen) and his assistant, Alan (Troy Donahue). It's a wrap and the party starts soon after. Professional model Nancy (Donna Spier) shows up at the party, is unceremoniously dumped in the hot tub and goes from being a serious model to stripping down to nothing for Jack's camera.
But this is all just build up to the huge project Jack has planned at his ranch. He is doing a photo spread that  glorifies sex and violence. And he will get the expressions he wants...no matter what.
CLICK gives us what must have been a Ross Hagen moment. He helps write it, direct it and, no surprise I promise, is the killer dressed like a nurse. Yes, a female nurse, otherwise who would care?
The movie takes forever to get off the ground and my famous actress spotting skills revealed Susan Jennifer Sullivan who plays the blonde, bitchy girl in FRIDAY THE 13TH 7:THE NEW BLOOD. In this movie she plays, well the same thing. She looks the same, acts the same, leaves her clothes on the same. Pretty dull.
Donna Spier was nice enough to give us opening nudity and then another girl gets naked for the bathtub before being stabbed to death in it.
Hagen does his normal chewing up the scenery that is always expected from him and you have to wonder if it was just a slasher flick cash grab for him. Makes sense. If you watch the end credits it was actually made in 1989 so, the time frame is right.
I wonder how many people are looking for the Adam Sandler movie and get this instead. I also wonder if they finish watching it or make a quick exit. For slasher movies it is a little slow, but for complete madman acting skills, Hagen is the master of this flick. Just watching him makes the movie worthwhile.
Posted by Douglas A. Waltz at 9:44 AM No comments: