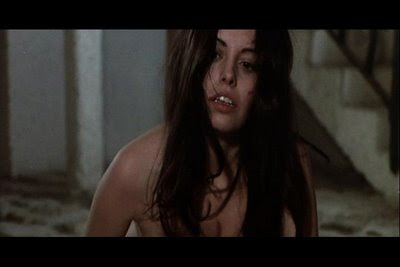 My buddy, David Zuzelo, has posted a wonderful article concerning the delectable Lina Romay. Since she and I share the same birthday I thought I would post a link to David's site so you can check it out.
So, without further ado

Tomb Who It May Concern
Posted by Douglas A. Waltz at 8:50 AM No comments: 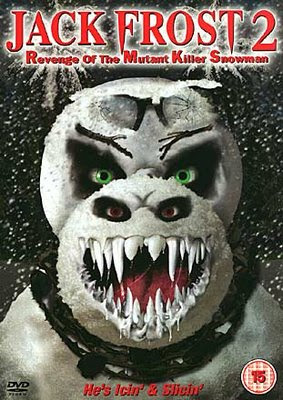 I have no idea why I watched this thing. Probably for that long subtitle, but I did watch it. Watched it with the littles and we laughed so hard I thought I might hurt myself. It's nice when a film realizes that its basic premise is so ridiculous that it ridicules itself. Makes for an easier viewing experience. Basically we have a killer snowman who was defeated in the first film (didn't see it) and now he's back for revenge on the sheriff who put him out of commission.
The suit is horrid, the little snowmen are funny, but horrid. The acting is horrid and the special effects are non existent. There is one scene with a girl in a swimming pool that is not horrid, but it's because she's naked and pretty.
I have no idea why the trailer for this flick is only in German, but it adds to the ridiculousness of the proceedings so, go with that.
Should you watch this. Absolutely! Should you go in expecting a horror movie? Absolutely not.
Did I mention the nice boobies?

Posted by Douglas A. Waltz at 9:00 AM No comments: 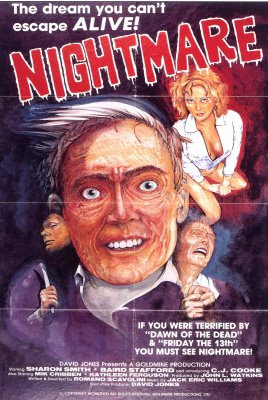 Also known as NIGHTMARE IN A DAMAGED BRAIN, I remember seeing this on initial release. Probably in a theater. What I remember from that viewing is that the movie was just so damned sleazy. Revisiting it has changed none of that, but let's get a rundown here, shall we?
Seems that George Tatum has been a bad boy. He slaughtered a family in Massachusetts and is now under the care of a New York Psychiatrist who decides that experimental drugs would be best to make him a viable member of society again. But there is something lying under the surface of George's psychosis. A deep rooted incident that we see little snippets of throughout the picture.
George has been allowed to roam the hooker filled streets of New York without supervision and his doctors are shocked when he doesn't show up for his first office visit. George has other things in mind and makes a beeline for Florida.
Why?
All is explained in the end which I am not giving away here. This is definitely one of the grimier flicks that should be watched by all horror aficionados.
A couple of things I want to make mention of here before I turn you loose on the trailer;
First, there is a kid committing a brutal axe murder in the film. You would think that they would do the old, shot of the kid doing the swinging, but all the carnage taking place with a double or some such thing. Nope. I'm pretty sure,. by the looks of things that they just let the kid go for it. This would have never happened nowadays. Even micro budget film makers tend to tip toe around this sort of thing. 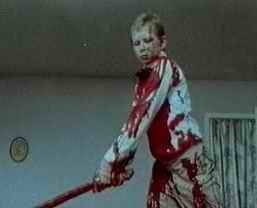 Posted by Douglas A. Waltz at 4:24 AM No comments: