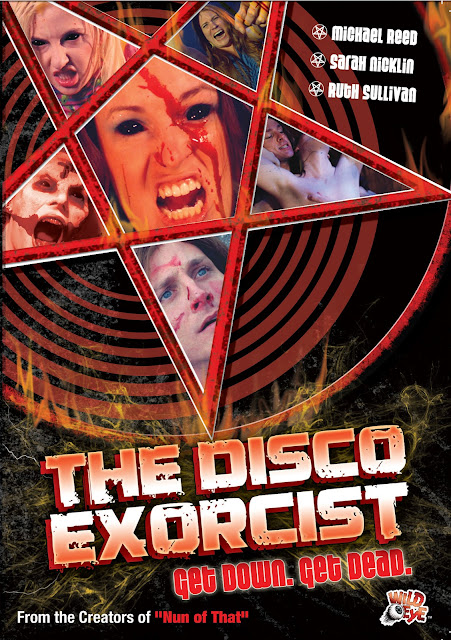 Rex Romanski (Michael Reed) is the king of the disco dance floor. He loves to dance. He loves the ladies...all the ladies and he loves the drugs. Then he meets Rita (Ruth Sullivan) and he thinks he has found true love. Rex in unaware that Rita is a voodoo priestess with ties to the dark side. When Rex meets porn star extraordinaire Amoreena Jones (Sarah Nicklin) he realizes that it's time for Rita to hit the streets.
Rita has other ideas and curses Amoreena. Pulling out a lock of her hair helps with the whole demonic possession thing and it isn't long before Amoreena's eyes turn black and she goes on a murderous rampage.
THE DISCO EXORCIST shows us that Richard Griffin is a master of what he does.
You want a disco/horror blood and guts exploitation film? You got it. He uses the tattered film look to maximum effectiveness and you believe that it was made forty years ago. This is what Tarantino and Rodriguez' GRINDHOUSE was supposed to be.
While I am a huge fan of Griffin's ATOMIC BRAIN INVASION, I think this has nudged NUN OF THAT and BEYOND THE DUNWICH TERROR out of second place. This is what low budget film making should be; original and embracing it's exploitation roots at the same time.
I caught this on the ROKU channel Midnight Pulp. It's free and this amazing film is there for your viewing pleasure. Be sure to watch this incredibly gory, sexy, funny film today.
You won't be sorry.
Now, if I could just figure out why I think Sarah Nicklin is so freaking hot when she has the all black contacts in during her possession scenes. She did this in BEYOND THE DUNWICH HORROR as well and I thought it was hot there as well.
I think there is something wrong with me.
Oh well.

Posted by Douglas A. Waltz at 3:18 AM No comments:

HIDDEN HORROR : A CELEBRATION OF 101 UNDERRATED AND OVERLOOKED FRIGHT FLICKS

Review books can be a tricky beast to review. How do you read it? Do you just cherry pick the reviews of films you want to read? Do you check on the films to see if you agree with their reviews? Do you just start at the beginning and plow though to the end?
This is doubly hard when you are a film reviewer as well. It becomes a game of how many have you seen.
Let's start with the good.
The book itself is beautiful. I assume it's made through CreateSpace and it shows what can be done with that particular Print On Demand process. Editor Aaron Christensen has done a fine job assembling so many reviews. At 313 pages this makes for nothing more than brief overviews, but it does give you an idea of what these movies are about. An appetizer of a review, if you will.
The logistics of getting all these reviewers in one place must have been a logistical nightmare and I applaud Christensen for getting that accomplished.
Now, my problems.
The title, the entire title immediately puts me into a mindset of  'Okay, lets see all these amazing pieces of cinema that I have never heard of.' It becomes a challenge as a film watcher to see how many of them I have seen.
The answer?
All of the ones I cared to see. Yes, there is a slim minority of films in this book that I have not seen. Why? Didn't want to. The older I get the less time I am willing to invest in films that I have no desire to watch. But, I have seen a lot of these.
The title shoots the book in the foot. Well, if book had feet. That might make it easier to read them. Just call for the book you want and it comes scurrying over to you. Convenient. And, a little weird. The title tells you these are overlooked and underrated films.
I want to give you a short list of films;
THE BLOB
CARNIVAL OF SOULS
THE HILLS HAVE EYES
I SPIT ON YOUR GRAVE
THE SEVENTH VICTIM
In what alternate universe are any of these films underrated or overlooked. The editor, in his introduction, tries to waffle out of this with a throwaway comment that if the reviewer felt that way it was okay to include it in the book. No, I think it might have just been better to change the title of the book. As I mentioned before, the title creates a mindset in the reader and with every movie that goes against that mindset the book becomes more and more irritating.
Add to that there are reviews that I feel miss the mark entirely. BRIMSTONE AND TREACLE, for instance, just doesn't seem to grasp what is going on. Martin is not the devil. Martin is an answer to a mother's prayer for her catatonic daughter. No devil would remove that torment.
The review for POSSESSION is too brief for such a bizarre, layered film.
I could continue, but you get the idea.
In the end I wonder who this book is intended for. True horror fans will have seen so many of these films that the title is going to annoy them again and again. Newcomers to the field might find it a useful book, but I can't speak for them. I've been in this game for far too long to know what that mindset would even look like.
HIDDEN HORRORS? NO, not really.
Also, I am not a fan of the cover.
Sorry.
Posted by Douglas A. Waltz at 4:27 AM No comments:

Look at these!!! How cool are they??? I do loves me some Godzilla so you know they will have to be added to my collection. And the coolest part is that you can get them, maybe even for free!!! Just follow  this LINK and it will get you to all the details. Have fun and enter today!
Posted by Douglas A. Waltz at 3:35 AM No comments:

So, since the place we are buying our new vehicle from couldn't manage to have it ready for the trip we were lucky that our delightful daughter in law, Tabbie, lent us her car. We also took her husband, my oldest, and my grand daughter, Coyanna with us. So, along with me, my lovely wife, Martha and my daughters, Delia and Dandelion, we hit the road, ready for adventure.
We fueled up at the nearest  Taco Bell for their new breakfast, which was amazing, and hit the open road.
We arrived without incident and got checked into our room. And then were off to get our weekend passes. We went into the dealer room and saw everyone before going out for dinner. I did make sure to get copies of A BULLDOG FOR CHRISTMAS and HAUNTED HOUSE ON SORORITY ROW from our good friend and film maker, Henrique Couto.
Dinner was at a little place on Pearl Road called Katherine's. It was amazing. I got the fried ocean perch with piergoies and cabbage soup. Very good. We then stopped at Ground Zero Comics which was cool, but nothing like our good old Fanfare back home.
The first real event we were going to was the burlesque show by a group called The Rustbelt Honeys. Yeah, they had sound issues and took forever and they broke the cardinal rule. Don't bad mouth someone who tried to help you with your sound issues for three hours. They did, I left and we will leave it at that.
After that the charismatic, Charles Band took the stage with his Full Moon Roadshow and he showed us lots of cool things and convinced many women to show us their boobies onstage. It was magnificent and we signed up for Full Moon Streaming on the spot. 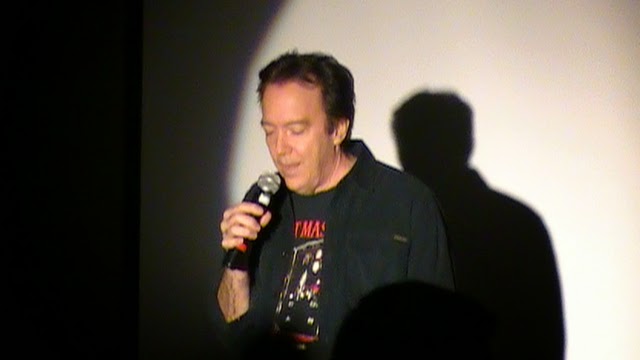 After that we made out way to the little room to watch an independent feature that was called BUNNI. I called the ending, but it was still good and the lead villain was pretty cool visually.
Then came Bill Zebub's newest feature, Scienceless Fiction, a tirade about the over abundance of political correctedness that we currently live in. Expect a review in the near future.
That put us at a little over 3 in the morning so we went back to the room and passed out.
My oldest son that came with us, staggered in about five and proceeded to throw up in the bathroom, flushing his pass and glasses in the process.
Saturday morning was spent watching 42nd Street Pete's Hardcore Wrestling Hour. Always a great way to start your day. We bought many souvenirs, including movies from Bill Zebub and Tom Sullivan's amazing documentary INVALUABLE. He sighed it and drew a little deadite on it for me. So cool. The one and only Gerrit Graham signed my VHS copy of his movie THE ANNIHILATORS. He also gave me the following, amazing story;
It seems that when they were filming the Vietnam scenes there is the scene where his character trips a trap that sends a log with a spike in the end, swinging through the air and spikes the canteen on his head. Yeah, while the spike didn't touch him. the log itself whacked him in the head. A crew member came rushing up and said, "Man, I just saw your skull!" Luckily, there was a great plastic surgeon in Atlanta where they were filming and he showed us you couldn't see the scar. I could have talked to him all day, but so could many fans so I left him to be the awesome gentleman he is.

Then we went to listen to director, Kevin Tenney talk about his movies before they showed NIGHT OF THE DEMONS. We didn't stay for the movie having seen it so many times before. 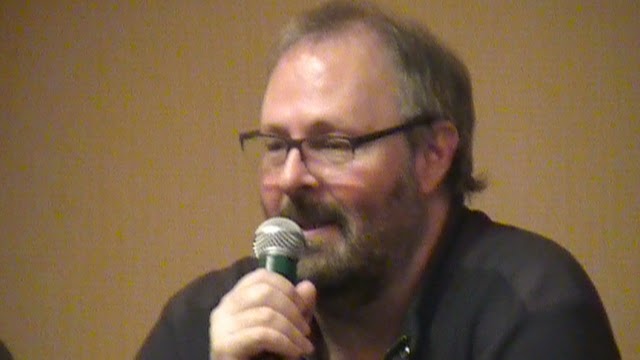 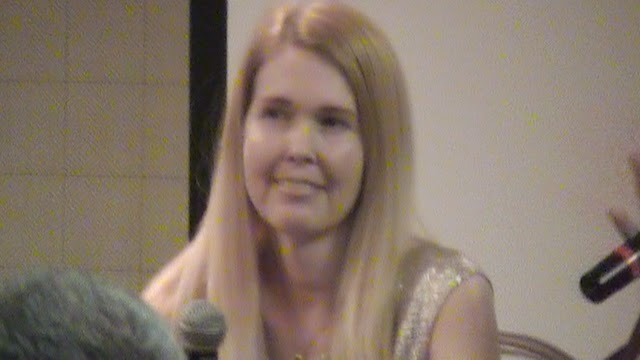 At 8 that night was the reason to come to Wasteland. I am, of course, speaking of GHASTLEE'S NIGHT AT THE MOVIES. A. Ghastlee Ghoul, his amazing band, Splattertude, and a plethora of people made music, did games, had fun and had a wild time. 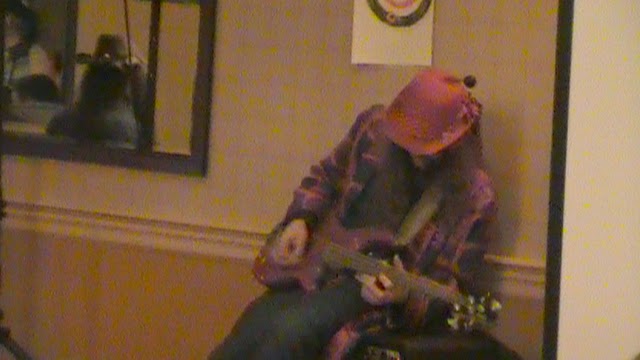 After that it was time to hang loose in the lobby and talk with people and absorb the vibes of Wasteland. We met Calavera and he/she seemed very nice. Someone screamed at us that Vagrancy Films sucked. It was fun. 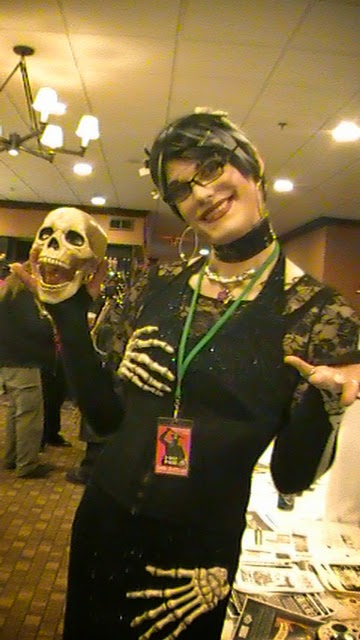 Then, Martha and I saw THE PHANTOM OF PARADISE before turning in for the night. 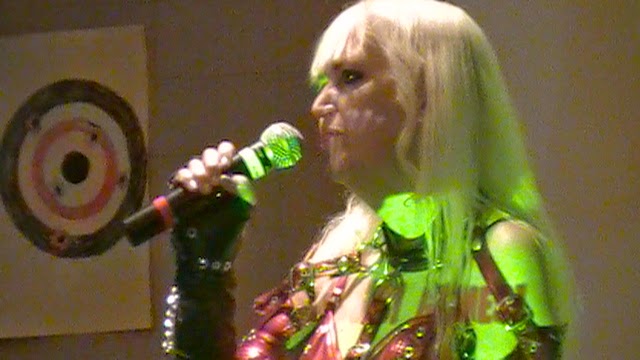 Sunday morning we killed time at the nearby mall before going back to say goodbye to everyone before heading home. It was a great time and I managed to not let the unprofessional behavior of The Rustbelt Honeys not bother me...too much.
Thank you Cinema Wasteland for an other excellent weekend! 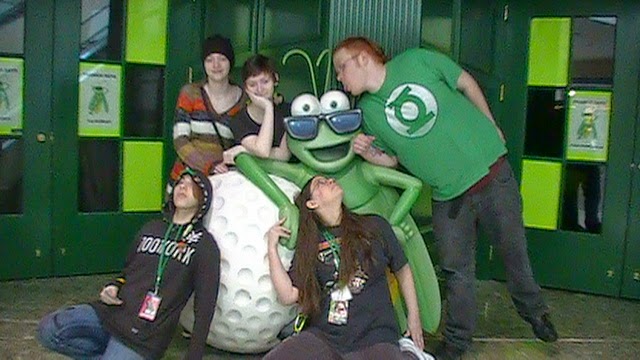