DAWN OF THE DEAD: A Sideways Re-Visit 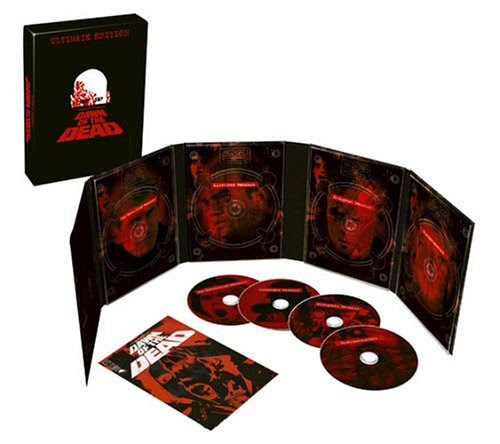 For those not familiar, It has the theatrical release, the director's cut and the European release of the film along with two full length documentaries and a ton of extras. There's even a comic book in there. I traditionally watch the director's cut. It's the only one I prefer as the other two are shorter. The European version is the shortest of the bunch.
Last night I decided to put in the European version.
It's a pretty lean version of the film, but it hits all the right beats. I am also amazed that it has dialogue not found in either of the other versions. My only real critique of the film would be Argento's, who cut this version, heavy reliance on Goblin's soundtrack as opposed to the mall music which, I think, sets the scene a lot better.
One of these days it would be interesting to see someone cut the extra dialogue into the director's cut to make a Ultimate cut. I know I can't do it because the music doesn't match up and I don't have the technical know how to remove separate tracks to make it work.
Oh well, a fan can dream, right?
Have an excellent Halloween everyone.
Posted by Douglas A. Waltz at 6:16 AM No comments:

Too Much Too Soon

Today Crimson Peak is released upon the world. I have every intention of seeing it. I like Guillermo Del Toro movies so, this should be good. My wife will be happy because Tom Hiddleston is in it and, hey! Who doesn't love Tom Hiddleston?
The problem I'm having is that it seems like I have known quite a long time that this movie was coming. Clips and trailers have been around for a long time. Apparently it was announced last year so, we have known about this for quite some time.
I'm seeing a problem here.
Movies that haven't been released yet, like Captain America:Civil War already have a bunch of information out and that movie is scheduled for what, next year? I realize that we live in the Internet Times now and information is immediate, but I think, in the case of movies, that this is causing more harm than good.
Won't some people think they've already seen some movies before they have evn seen them?
They'll see the trailer and say,
"Man, hasn't that movie already been released? Isn't this the trailer for the DVD release?"
I don't know.
Maybe it's just me.
The older I get the more I see this sort of thing.
I get more excited by what Vinegar Syndrome is putting out this month than what is being released theatrically.
I'm still going to see Crimson Peak this weekend.
It is coming out, right?

UPDATE: Went to see the movie. Such a classic Gothic horror story. So lush, beautiful and frightening to look at. Glad I went to see it. Glad Hiddleston showed my wife his butt. Go see what may be one of the most original horror movies I have seen in a very long time.
Posted by Douglas A. Waltz at 5:44 AM No comments:

With the lovely Scarlett Storm stripping for us during the lengthy credits of everyone in the movie, you know that you are in the right place.
In this particular case we are in a place where puppets exist side by side with humans. Referred to with the derogatory term of ‘Others’ these puppets are insane and out of control. The highest ranking puppet with his own show is Jesus. The show is called Jesus Saves Satan Invests. Lydia and Erin are roommates and into there world is Barbara (Bill Zebub) a convict out on work release installing free cable for everyone. He tries his moves on Erin, but she is a lesbian and only has eyes for .
But Barbara isn’t all that he seems. 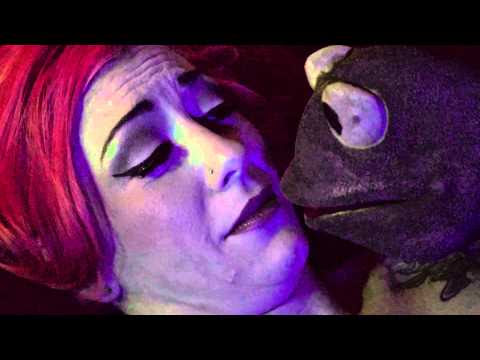 With outlandish concepts like giant teddy bears that rape women. A Siamese twin that has a gay puppet growing out of his shoulder. And having a preference for puppets making her a otherfucker.
Once again Bill Zebub manages to create and interesting, alternate universe out of whole cloth and brings us the movie that no one else would dare to. When I was looking for some pictures to go with this review there were many people making images of Elmo dressed as Freddy Krueger.
Not Bill Zebub.
He wants you to descend into his own personal Hell of puppet rape, out of control, mind controlling media and religion that has gone off the deep end.
It is always a pleasure to see Scarlett Storm in anything and this is no exception. The opening sequence I mentioned earlier morphs into a wild simulated sex scene with Bill where he transforms into Kermit The Toad. Yes, he painted a Kermit doll brown. Yes, it is hilarious. Scarlett keeps switching from the nightmare and then back to reality. By the end of the scene her mind is fried.
and make a good pair. Sounding off on everything from the inanity of to religion doing nothing more than fleecing the ignorant masses. It would be interesting to see them in something together again. They don’t spend much time together in Holocaust Cannibal. Here they show that they have the chops to carry an intricate scene with some pretty heavy dialogue.
So, if you think you have seen it all…you’re wrong. Every time Bill Zebub unleashes another one of his bizarre visions onto the world, every thing changes.
I think for the better. 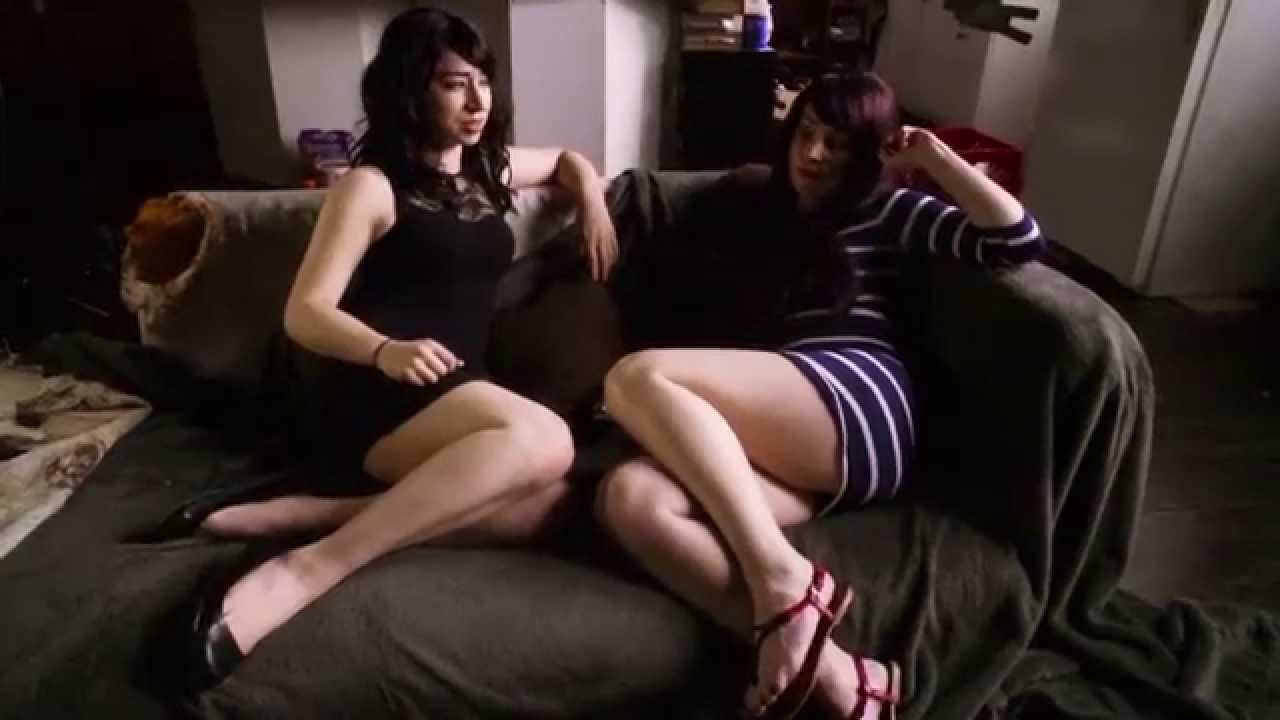 The DVD is loaded with extras. He highlights all the epic music that fills every film and tells you where to get your own. There is a Horrorhound Q&A for Holocaust Cannibal. Bloopers and some behind the scenes stuff.


A quality DVD filled to the brim with all the goodies we have come to expect from Bill Zebub.
Posted by Douglas A. Waltz at 5:12 PM No comments: 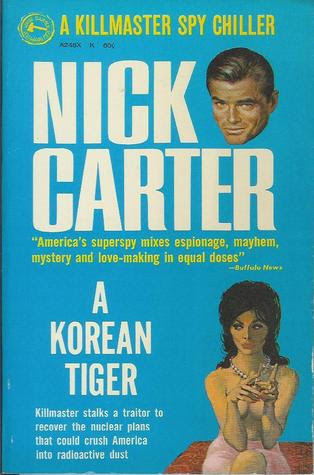 I recently picked up a brown grocery bag of Nick Carter, Killmaster books. I have had them for a little while, but hadn't dipped into the bag to see what all the fuss was about.  I am curious as to why Carter names his gun and knife. Didn't Richard Benson, The Avenger, do the same thing? And probably sooner if the time line is correct.
So, Nick Carter is having some down time with his favorite married woman who skips out and has a few rounds of sexy time with Nick from time to time. He gets a call that a man by the name of Bennett has killed his wife and has a photographic memory. Apparently, he was a mole that the Russians forgot about. They also forgot he was a bit of a pervert and he finally snapped. Killing his wife he left the country and now all of Americas enemies want what is locked in that little brain of Bennett's.
Killmaster is given one order; Kill Bennett.
The trail starts in Europe, stretches to Korea and Carter must endure the most sadistic torture in the world that involves two thin pieces of wood, a rubber mallet and his testicles.
This might have been the most uncomfortable part of the book for me.
Clocking in at a sleek 160 pages this was a fun book. I can see the draw as he is a man's man and the ladies love him for it. He comes across as more of a bad ass than James Bond ever was.
I think I might have to finish reading the rest of the books in the brown paper bag.
Posted by Douglas A. Waltz at 1:21 PM No comments: