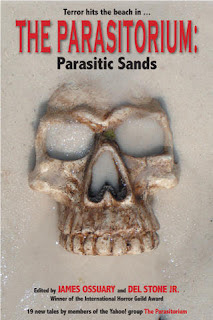 I have belonged to a Yahoo! group called The Parasitorium for a little while now and they have released their second anthology with a story entitled, ATTACK OF THE CREATURES FROM BEYOND in it. If you like old B Movies with plot holes so big you can drive a truck through them then this is the story for you, plus you get 18 more stories as well. Here's the link available for sale and download;

THE GHASTLY ONE: THE SEX-GORE NETHERWORLD OF FILMMAKER ANDY MILLIGAN

I first heard of Andy Milligan in the early eighties. 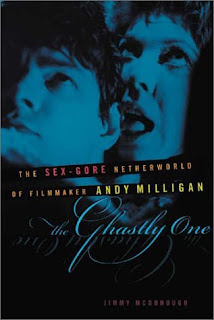 It was from a small press magazine called Demonique or some such thing. It was there that I also learned of a film entitled LEMORA, but more of that another time. The films of Andy sounded too bizarre and back then there was no way I was going to get to see any of them. I looked with my limited access in the wilds of Kalamazoo Michigan, to no avail. As the years went on I read a few more things concerning Mr. Milligan, but it wouldn't be until the new millineum when I would first be exposed to his work. I ordered a VHS of THE RATS ARE COMING, THE WEREWOLVES ARE HERE! and from that point on I was hooked. This low budget spectacle was grindhouse extrodinaire. I couldn't get enough of it. Later I would pick up the Something Weird Milligan double feature of THE GHASTLY ONES and SEEDS OF SIN. I have watched every second of that disc repeatedly. In the disc was a little essay and it mentioned the book that I present for your entertainment today. I found a copy at www.oldies.com for a measly three bucks and decided to order it immediately.
Now, I like a good biography. Two of my favorites are; EDIE by Jean Stein and George Plimpton and NIGHTMARE OF ECSTACY:THE LIFE AND ART OF EDWARD D. WOOD JR. by Rudolph Grey. This book blows them both out of the water. While I like the style of the other two books and the way they use personal recollections of many people to form a cohesive history of their subject, neither of them get as dirty as author Jimmy McDonough does with THE GHASTLY ONE. The book is a time capsule of the off off broadway scene juxtaposed with the ins and outs of exploitation film making and distribution on 42nd Street. The fact that Mr. McDonough uses many quotes from MIlligan and is actually with him at the time of his death, paints a much more intimate portrait of a madman than any other book is able to do. The Andy Warhol book, HOLY TERROR comes close but it's author, Bob Colacello seems more concerned with himself than his subject. HOLY TERROR comes off as way too whiny for me. In THE GHASTLY ONE we are given our subject with no flourishes or retouches. Andy Milligan is laid bare before us and we realize that in spite of his forced medium (you really can't say chosen it just doesn't play out that way) he manages to make films that are still discussed today. Love him or loathe him, there is no middle ground with Andy Milligan.
www.amazon.com has thirteen copies of this priced at less than 10 bucks plus shipping. www.oldies.com is still selling copies for three bucks. There is no reason in the world that anyone who is serious about film in any form should not own this book. It will be the best and most disturbing thing you will ever read and you'll be glad you did it.

Here's the link for Oldies.com;
http://www.oldies.com/product-view/BK1385.html

What are you waiting for? Go and get this book! You can thank me later. 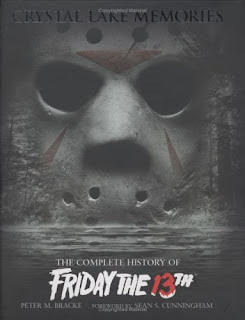 This is a monster of a book. I am lucky enough to have gotten a copy of the 2nd printing of the book. I guess the first printing flew off the shelves and now fetches a pretty hefty price amongst collectors. Thank God I'm a reader, not a collector.
This bills itself as the definitive history of the Friday The 13th franchise. With coverage of all ten flicks, the television series, the books and comics as well as FREDDY VS. JASON, until something else comes along. This would be the book.
But, it's more than that.
Author Peter Bracke has managed to find people involved with many differetn aspects of the series. From directors to producers to people starring in them. We get the story down and dirty, just like it happened. Plus it's told entirely from the viewpoints of the people he interviewed. This makes it a realistic approximation of how low budget films are made, marketed and distributed.
The book is as much of a monster as Jason himself. It's one and a half inches thick, weighs in at just under five pounds and comes with a hardcover that could split someone's skull. There is also a fantastic wrap around sleeve that I immediately removed and hid away from my children.
Sure it's got a forty dollar price tag on it, but this might be one of those rare occasions where the book is actually worth the cash.
Loaded with great pictures on high gloss paper and filled with minute details of the production of one of the most successful series of films ever made.
CRYSTAL LAKE MEMORIES...get it before it gets you.
Posted by Douglas A. Waltz at 12:46 PM No comments:

AND NOW A WORD FROM OUR SPONSORS! 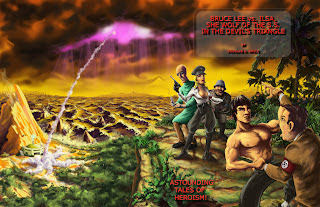 Yeah, I'm lying. We don't have any sponsors here. But, my good friend Linc Polderman has almost completed the cover of the first of our series of chapbooks that are subtitled;

The first one is going to be BRUCE LEE VS. ILSA, SHE WOLF OF THE S.S. IN THE DEVIL'S TRIANGLE.

The text needs one more fine tooth comb through to check for any possible mistakes that I could have missed. I also need a blurb for the back cover. Then we set the whole thing up to get printed. This has been going on for quite a while and I'm looking forward to it getting done.

To whet your appetite I present the nearly finished cover.

Bask in it's glory! 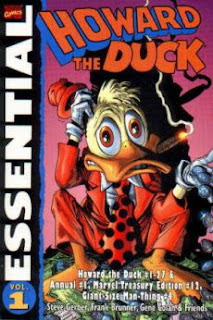 'You meatbrains willingly subject yourself to more abuse, physical and psychological than any nation in history! You allow your eyes and lungs to be eaten away by pollution. You fill your digestive tracts with chemicals. Your ears are barraged by the sounds of jackhammer progress. All this while the politicians and Madison Avenue bang away at your minds. You all wanna be happy an' secure, yet you open yourselves to the constant tension an' pressure of a society that claims to be free, but refuses to let you make a move without first filing forms in triplicate. YOu wonder why you got violence? Why your young are either dissident, empty-headed or drugged into a stupor? It's because you've fashioned an emotionally and intellectually sterile culture, that's why!'
Isn't it amazing how something written 30 years ago can ring so true today? And this was from a newsstand comic book about a talking duck! Steve Gerber was a big deal to me when I was growing up. I was a huge fan of Man-Thing. I thought that DC's version in Swamp Thing was whiny at best. Man-Thing was a force of nature and didn't let crap like thinking and feelings get in his way. It was in the pages of Man-Thing that I met Howard and I was hooked. In my many years of collecting comic books this is the only comic I ever subscribed to. There was no way I was going to risk not getting down to our local IGA in time to get the one copy of this off the rack before someone else who didn't get it picked it up before me. I can still remember getting issue 16, the all prose issue and initially being pissed right off. Then I read it. Then I read it again and againa and, well you get the idea. It wasn't a comic, persay, but it saidf a lot to me. This cigar smoking, foul mouthed mallard knew how to push my buttons and was cutting edge satire for it's time. It still is. The original run lasted for 31 issues and there were 9 issues of a black and white magazine version of Howard as well. This Essentials has Howard's Man-Thing appearances and the first 27 issues of the color comic run. Why 27 and not 31, you ask? I think it's because Gerber was fired after issue 27. Hopefully they will collect the other issues as well as the magazine and even the short lived newspaper comic in a second Essentials volume. It might not be Essential but it would be completist of Marvel to do so for the true fans .
Marvel's adult MAX line had a fantastic 6 issue Howard The Duck series that should have led to bigger and better things. It didn't and that is a shame. Howard is a man, er duck, for all time and everyone should read this collection of some of the best comic work ever to come out of Marvel.
Oh, and the fantabulous artwork of the master, Gene Colan ain't nothing to shake a stick at either.