This year was the My Bloody Valentine reunion. That was interesting to me because it meant that the director and three actors from Pinball Summer would be there. Time to get my vinyl soundtrack signed. I decided to do that first thing Friday and they were all so happy to see it. Look down at the bottom of the post for the lovely folks that signed my stuff.
We got to see all of our Wasteland family and Martha and I watched a short film blocks that had a couple of stand outs. The Clown Dies @ Midnight was hilarious. James Bell's The Bliss was amazing and I told him I want the soundtrack. He said he was working on it.
Later, Dandelion, Dan and I went to see The Boogens. Everyone was watching the show and making comments, you know, like you do at Wasteland. Anyway this old fart at the end of our aisle leaned over and told us our commentary was ridiculous and to be quiet. I don;t think he saw me as I was sitting between my children. I leaned forward and yelled Calm Down! He went to sit somewhere else and I noticed that people started commenting louder after he opened his yap. We managed to say ridiculous all weekend whenever he was within earshot.
Saturday morning we watched some cartoons. This one will give you nightmares, I promise.

Then it was off to Pete Chiarella and Toby Klein's hardcore wrestling hour. There was a match that they put patio blocks on top of the mat and also brought in some light tubes. It looked painful.

We also got to see an uncut print of My Bloody Valentine and then the cast came out and answered questions. I got to ask the director my one question from Pinball Summer. I wanted to know if he was being meta during the final scene where they are having a pinball tournament and they were playing a machine that had the cast painted on it. He kind of joked about it, but just said they did it for the true fans of the movie who would have noticed something like that. Probably not my favorite answer, but he was having a good time.

We went to The Olympia for food and ice cream. I had the chicken paprikash again as they were out of the Cuban sandwiches. I had pumpkin pie ice cream which was super delicious.
Then it was back to the convention where A Ghastlee Ghoul's Night at the Movies gave us music and games. I lost the trivia to Pete, but he gave me the trophy anyway. I discovered that while I am super good at answering trivia questions I suck at writing them.
I went back to the room for a nap with the intentions of getting up to watch Pinball Summer.
My alarm did not go off. It's okay, I have a copy of my own.
So, the next day we got up and said goodbye to our friends and came back home. It always goes by way to fast for me.
It was a great time. 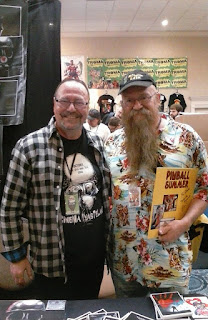 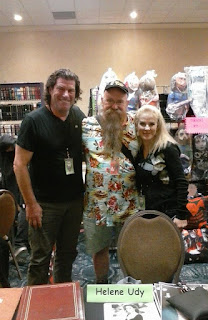 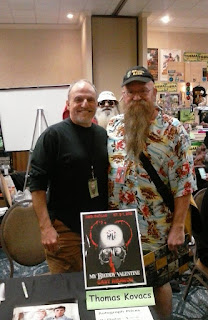 Posted by Douglas A. Waltz at 4:03 PM No comments: