K. Gordon Murray was good at one thing. He would buy fairy tale/kiddie flicks from foreign markets, dub them into English and release them on the American theater circuit. His release of Santa Claus in 1959 probably gave generations of kids nightmares. All of the films were slightly demented because, in actuality, they were never meant for an American audience.
None moreso than this little flick.
It seems that The Big Bad Wolf and The Ogre are at a trial for not being able to destroy Red Riding Hood and Tom Thumb. The Queen of the Monsters, who looks a lot like Disney's Maleficent had decided that they will be tortured and executed. Even Red Riding Hood and Tom Thumb think this shouldn't happen to even a monster and with the help of Stinky the Skunk, they set about freeing the monsters from the other monsters. This brings the wrath of the Queen upon them and they have to doge monsters galore while continuing their quest.
The interesting thing is that this is a musical. Unfortunately, you will never hear singing this horrific in your entire life. Flat and out of tune doesn't stop this horribly dubbed atrocity from singing it's little heart out.
Sure, the costumes are primitive, but since it's a kiddie flick you sort of cut them some slack.
I think it's hilarious that the Good Fairy changes Tom Thumb to a normal sized kid about halfway through the flick. I'm sure it had more to do with budget constraints than story line. Plus, her magic wand is festooned with sparklers that give out halfway through the scene and the actors tend to shy away from the blazing contraption.
This is a truly bad and fun flick with all these monsters chasing these little kids through some surrealistic woodland it promises to give a new generation of kids nightmares that will scar their psyches forever.
Yay!
Caperucita Y Pulgarcito (Little Red Riding Hood and the Monsters) [VHS] 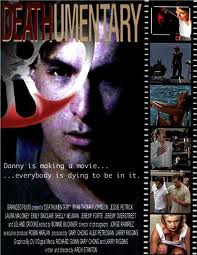 Okay, before we get into the actual review, I have a few things to go over here. On initial viewing of DEATHUMENTARY, I found a film that was pretty good. When I checked the tape listings, all I had was the title and the running time of the flick. I went back to the flick and got some more info. You know, the director's name and the main cast. After that, I decided to go to the Internet to see what I could find. Because, as I said, I liked the movie. But there was nothing there about the movie. A big fat zero in the massive world of the Internet. I decided to check out the director, Arch Stanton, and see what I could find out. Imagine my surprise when I found that it was an alias for Jim Wynorski. Jim has done some stuff directly on video before, so it wasn't a stretch to think it could have been him. Then I found the note that accompanied the film. It was written by an Alex Petrosian. Now why would someone use an old Jim Wynorski alias for their project, especially when it’s being submitted to festivals? There was an email address, so I decided to contact the director via email. No response. This put my bullshit antenna up at this point. Why wouldn't someone playing their flicks at festivals admit to making this film? After all this footwork, I came to a decision: This is a Jim Wynorski film. I have no idea why he wouldn't put his name on it. Probably because there are no tits in it. Maybe he wanted a film festival audience to see it first. Whatever the reason, it is a good movie. Let's get into it shall we?

DEATHUMENTARY chronicles the teenage angst of Danny (Ryan Thomas Johnson). He is one of the geeky, high-tech losers at high school. Danny is madly in love with one of the most popular girls in school and has a habit of ticking off the school bully at every turn. His buddy Vince (Jessie Patrick) is always there for a really bad idea and his friend Lily (Emily Sinclair) is one hot girl who is madly in love with Danny. Of course, he can't see this, being all wrapped up in his teenage angst, the popular girl, and all. His life is pretty aimless. That is, until he videotapes the shop teacher giving a power tool demonstration.

The demonstration goes horribly wrong and the teacher ends up minus a limb and his life. Of course, it has all been captured on videotape. Enter video entrepreneur Seymour (Leland Crooke). He makes a fortune on a series of FACES OF DEATH rip offs and Danny's footage is just what his next instalment needs. Danny has no problem selling the footage and it is then when he comes up with a brainstorm. There are people in his life that make him miserable. Why not whack them and get it on tape? That way he gets rid of all the pains in his ass and makes some cash on the side. Sounds like a good idea. Right? It doesn't take long before the cops catch on to what is going on and Danny becomes a hunted man. Seymour has a plan to get the last of Danny's footage and then make it look like the kid went over the edge. A little self-defense and making sure it's all captured on video for the world to see, and Seymour has the ultimate instalment of his series. Unfortunately, Danny is a bright boy and has other ideas.

DEATHUMENTARY is a wonderful film. It is played a little tongue in cheek. Sure, it has the gore of a slasher flick, but it also has the hi-jinks of a high school comedy. Couple that with the general derision towards those FACES OF DEATH types of Mondo Mockumentary Entertainment and the moment where Danny is actually talking to us while his friend Vince is left clueless, and you've got cinema worthy of cult status. Sure, it's shot on video but so many projects are nowadays, which means it takes a great story to rise above the medium. DEATHUMENTARY is one of those movies. The acting is above average, while the camera set-ups and editing are both competent. This is another reason that I suspect that it's a Jim Wynorski flick.

As I mentioned before, there is nothing about this production anywhere. It seems like a lost film that someone is ashamed of. I hope not, because this is a real good time and I would recommend it to any true fan of the genre. It isn't often we get smart filmmaking on a slim budget.
Posted by Douglas A. Waltz at 7:02 AM No comments:

Double Feature At The Waltz Compound

Another lazy Sunday with a house of sickos and it was time to get some black and white exploitation up on the screen. First up was Devil Girl From Mars via my good friend, Michael Legge and his alter ego Dr. Dreck with another episode of The Dungeon of Dr. Dreck. It's summer time so the gang is at the drive in up to their usual hijinks. Throw in some vintage ads and an old school Looney Tunes with Beans (that's the character's name.) and Devil Girl From Mars never looked so good.
When you get a statuesque woman wearing a lot of vinyl bondage clothing who says she is from Mars and has the robot to prove it, you know that next thing she's going to do is take our men for breeding stock. Seems that Mars had a war of the sexes and the ladies won. Now, they have no way to repopulate.
I love the big, clunky robot in this flick and his disintegrator beam. The Martian chick ain't bad neither.

After a trip to the drive in I needed something a little sleazier.
Teenage Gang Debs fit the bill. 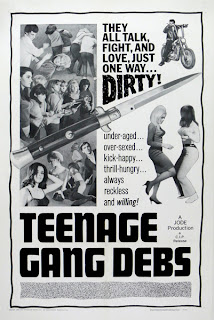 So, did Jack Hill watch this thing before he made Switchblade Sisters? Seems that Terry is the new girl in Queens, straight from Manhattan. She gets hooked up with Johnny, the prez of The Rebels and all is cool. Well, almost. Seems Johnny has a little thing about carving his chicks with his initials. Yeah, Terry ain't having none of that so she waves her feminine parts into the vicinity of Nino, Johnny's second in command. She puts out so he'll kill Johnny and take over the gang and she don't gotta get carved up.
See, Terry has a little problem;
She's freaking nuts!
She also wants to take over the gang and won't stop until she has eliminated all the competition.
This was a gritty little flick with zero nudity and stylized violence. It also has the song 'Black Belt' which might be the best reason to sit through this. After West Side Story and Switchblade Sisters, this seems a little weak even if it might have been before 'Sisters' and after 'West Side'.

Plus, I saw the ending coming from a mile away.
Another great double feature in The Waltz Compound.