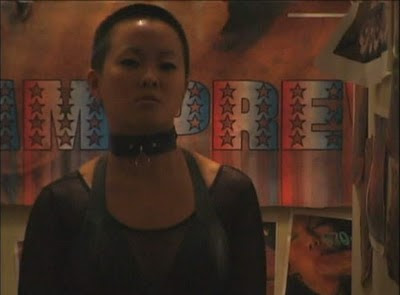 So, THE DAY AFTER HALLOWEEN? Yeah, right. What they did was take a lukewarm thriller and slap a new title on it. SNAPSHOT is more indicative of what the film is about as we get the young and naive Angela (played by the ultra cute Sigrid Thornton of The Man From Snowy River fame) who poses for a new ad campaign where she walks through the surf with her top off. She has a lecherous old man after her, a washed up lesbian after her and her wacky boyfriend who drives an ice cream truck is also in this particular Mambo line. Sheesh!
Although I can't blame any of them as she is quite lovely.
So, what does this have to do with the John Carpenter film, HALLOWEEN. Nothing, Nada, zip, that's what. The people who owned the flick figured they could make a buck and apparently they did.
Does that make this a bad film? I don;t know about bad, but I do know that it was boring as all get out. Well, except for the nude scenes. Those were nice, but does that make the movie? Again, I'm afraid I must say no.
Look at this one as a public service from the folks at Divine Exploitation. We watch movies like this one so you don't have to. Go find something good to watch. We'll stay here and weep about our wasted lives.
Posted by Douglas A. Waltz at 6:20 AM No comments: 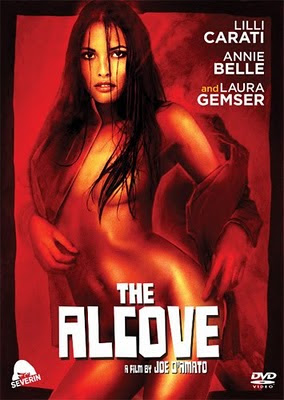 Severin Films once again brings us more of the amazing career of Joe D'Amato. In The Alcove we get the international sex symbol Laura Gemser as an African Princess brought home by a military officer as a slave. It isn't long before she is sucked into the decadence of lesbianism, voyeurism, drugs and pornography and revels in it. It isn't long before the world she has come to know starts to crash down around her ears as she slips further and further into decadence.
While The Alcove sounds good on paper, this flick actually is kind of dull and predictable. I saw the ending coming from a mile away and that's a shame. If you are a die hard Gemser or D'Amato fan then Severin has given you a beautiful print of a gorgeous film. It just doesn't have much more going for it.
The DVD also comes with a small interview with D'Amato that doesn't give any huge revelations, but does show the master of sleaze in his environment.
Posted by Douglas A. Waltz at 1:04 PM No comments: 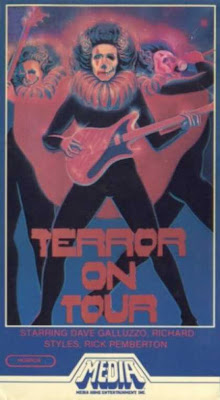 So, I've been on a kick of watching 80's slasher flicks of late. I like the no budget ones where no one goes on to do anything in the business. This one almost fits the bill with the exception of Larry Thomas a.k.a. The Soup Nazi. His acting is so bad that even he posted an apology on IMDB.
So, we have a group of guys who dress in clown makeup and demolish mannequins onstage while they rock and roll. Behind the scenes it's all drugs and titties and parties and titties. Did I mention titties? Yeah, there are a lot of them in all shapes and sizes in this flick.
Well, anyway, someone is wearing Clown makeup and slashing women to pieces in this flick. The police are stumped and the concert must go on so it's time to bait the trap with a cute girl who owes the detective in charge a favor.
Terror On Tour is pretty predictable. But, that's not what I look for in and 80's slasher flick. There should be blood. Check. Boobs. Check. And just a low rent look to the proceedings. Check and triple check. Terror On Tour has all of these things. My one beef is that it ends in a weird place. It should have been about five more minutes. In my humble opinion I think that there was just that one last push that the movie needed to end on a high note. In its current state it ends on a mid note which is just unsettling and I don't mean in a good way.
Couldn't find a trailer so you'll have to make due with the VHS box cover for this one.
Posted by Douglas A. Waltz at 5:43 PM No comments: 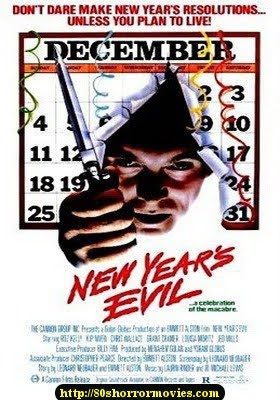 A slasher flick where Roz Kelly of Happy Days fame as the wisecracking Pinky Tuscadero, stars as a DJ who is doing a televised broadcast in all the time zones of The United States. What she soon finds out that there is a maniac killing people when each time zone reaches midnight and he's closing in on her.
I remember when this first came out. I can see the marquee at The State Theater in downtown Kalamazoo proclaiming its arrival.
Yeah, I didn't see it. I think I may have rented it once during the VHS mom and pop store boom, but I really didn't remember much. I liked Roz Kelly, but her sister Leather Tuscadero played by the smoking hot Suzi Quatro was much cooler to me.
This year I popped in a disc of the flick on New Year's Day. It was pretty standard and, since it was early, I fell asleep after the first relatively bloodless murder. The part of the film I saw was rather chaste and bloodless for a film sold as a slasher flick. I might finish it and, who knows? It might get better. If it does then I'll report back here. I kinda doubt that will happen, but ya never know.
Posted by Douglas A. Waltz at 9:41 AM No comments: