A Double Dose of Joy 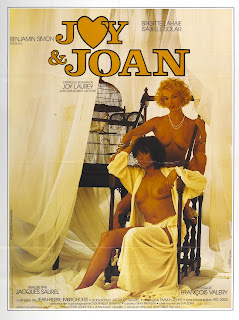 Severin has released two films from the 80's JOY and JOY & JOAN. The first, superior film has Joy played by the exquisite Claudia Udy. Just by listening to the interview with Claudia you knew that this was an exceptional young woman who was in tune with her surroundings and her own sumptuous figure. To be blunt, she is gorgeous.

Based on the autobiography of French-American super model Joy Laurey, Claudia embraces the unleashed sexual passion of Joy and enters into some scenes that are steamy even by softcore standards.
The print is magnificent and the interview with lead actress Claudia is very informative.
Joy was truly a joy to watch. 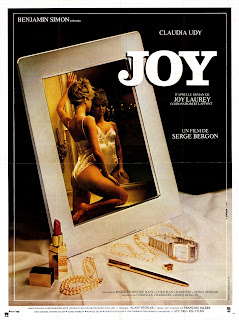 In the sequel Claudia is replaced by renowned Brigitte Lahaie. While very easy on the eyes, Ms. Lahaie comes across as a different charcater. In the sequel Joy has had it with the world of men and coiuples with tour guide Joan, played by the extremely beautiful Isabelle Solar. There is lots of skin on display like in the first one, but it seems less of a picture than the original.
Also, there are no extras on the sequel which seems bizarre as Severin tends to pride itself on its extras.
JOY and JOY & JOAN are the newest twosome of soft core magnificence from the people at Severin.
Be sure not to miss them.
Posted by Douglas A. Waltz at 3:14 PM No comments: 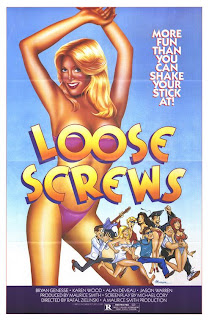 Severin Films does it again with the release of LOOSE SCREWS: SCREWBALLS 2, After their release of the classic teen comedy, SCREWBALLS, they had to give us the sequel.
This time out the boys, four of them this time, are being sent to a special school since they are unable to graduate from a normal high school because they are too busy chasing girls. After four years as a senior they are sent to Coxwell Academy as a last resort. Since there are girls at Coxwell their chances are pretty slim. Add to that the hot French teacher, Mona Lott and the boys have a new goal.
Sleep with Mona Lott.
With LOOSE SCREWS, the stakes are raised from the original film. The nudity is abundant and in the first one they are just trying to expose a girl's boobs, this time it's all about sex. There are madcap schemes to peek at girls. Everything from a liquid that dissolves bathing suits to some playful cross dressing to get into the girls dorm.
Alan Deveau and Jason warren are back playing basically the same characters with different names. Mike MacDonald who has previous 'balls' experience with the summer camp comedy ODD BALLS is the principal of Coxwell who also has an eye on Mona Lott.
This is noithing more than a madcap teen sex comedy and it delivers on all levels. Severin gives us a magnificent print of the film along with interviews with people involved with the film, an international, longer version of the film and a great commentary with director Rafal Zielinski. A great package for a fun flick.
Now Severin needs to complete the trifecta with SCREWBALL HOTEL, also by Zielinski and then they can make a box set of them all.
Oh, and we need a soundtrack release for this film Severin. The soundtrack embodies the time period and has some great tunes. When you have a movie that has a song about the impression a condom makes on a guy's wallet, you know you have a winner.
Posted by Douglas A. Waltz at 6:34 AM No comments: