THE VIDEO WORLD OF JESS FRANCO! 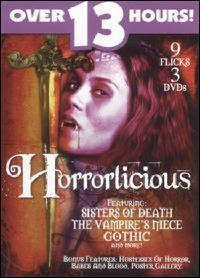 I have undertaken the task only a madman would think of. I decided that the recent output of Jess Franco has been given short shrift. To rectify this matter I am starting research which will culminate in a book that concerns itself only with his shot on video projects. So, From Tender Flesh to Snakewoman. I am also considering the inclusion of Killer Barbys since it's sequel is in this list. So, indepth profiles of each film and discussion of the under lying meanings behind this crop of work. Couple that with using his past films as a springboard for what he has been making lately and it should be fun. It means watching a lot of flicks though and that could be dangerous, especially where Jess is concerned. So, if you don't hear from me from time to time, that's where I am. Locked in my room watching Jess Franco films. Could be worse, trust me.
Now, on to this installment of Divine Exploitation!
Last year, for my birthday my oldest son, Seann took me to best buy to get me some DVD's. He got me a four pack called BLOOD BATH 2 because it had a copy of BLOOD SONG with Frankie Avalon. truly an underrated entry in the slasher flick genre. Anyway, next to it was a DVD set entitled HORRORLICIOUS. Nine flicks for about 6 bucks! How could I go wrong?
Here's what the six bucks got me;
GOTHIC - That's right. Ken Russell's twisted epic that supposedly chronicles the reasons behind Mary Wollstonecraft Shelly's reason behind writing Frankenstein. Personally, I'd rather watch LAIR OF THE WHITE WORM again, but it has some wild surreal touches.
THE DEVIL'S NIGHTMARE - I swear that when I was growing up that the owner of The Portage Drive In owned a print of this flick. He showed it every year with a different title! The beginning shot in sepia tone of the Nazi stabbing his baby daughter in her crib sets the mood for this flick of a demon who wipes out travellers to a castle and she does it according to the seven deadly sins. The guy playing Satan still creeps me out to this day.
THE HOUSE ON THE EDGE OF THE PARK - We get David Hess at his Hessiness. Watch David torment a group of partygoers. Watch David chew the scenery with the best of him. I do admit that the twist ending got me good the first time, but after that it just doesn't work.
BLOODY PIT OF HORROR - Ahh! Mickey Hartigay as The Crimson Executioner. I swear that this flick is the template for all those recent forays into torture horror like HOSTEL that have been coming out lately. Except this one is good. Mickey could give David Hess scenery chewing lessons.
HORRORS OF SPIDER ISLAND - Creepy spider monsters, creepy spider guy, lots of hot, curvy models all shot in some creepy ass black and white. I don't think it would have been quite as bizarre in color.
SISTERS OF DEATH - Five sorority sisters come back together to share a dangerous secret. And someone is killing them for it. This one works pretty good and it's twist is one of those where you keep saying, "Naw! That can't be what is going on." And then it is. Worked a lot like an old ABC Movie OF The Week and a lot of those were pretty good.
TERROR CREATURES FROM BEYOND THE GRAVE - Ah, Barbara Steele! Barbara Steele in black and white which is far better. That woman was meant to be viewed in monochromatic. And the tale set in an old hoary castle is quite interesting to boot.
THE NIGHT SHE AROSE FROM THE TOMB - Probably better known as THE NIGHT EVELYN CAME OUT OF THE GRAVE, this bizarre tale tells of a man who is slowly being driven to madness by his dead wife. Or is he? And the interesting thing to me on this one is that he is whacking women in the beginning of the film, but by the end he comes out as the hero of the flick. Truly a WTF? moment in Eurotrash cinema.
THE VAMPIRE'S NIECE - Known as FANGS OF THE LIVING DEAD this vampire flick stars Anita Ekberg and her two magnificent assets. When Anita inherits a castle she finds more than she bargained for in this atmospheric flick that had played in more theaters under more different names so you were always guaranteed to see it more than once.

There ya go kiddies. Nine really good flicks in pretty good shape I might add. Maybe not pristine prints, but watchable and in the end that's what really matters.
Posted by Douglas A. Waltz at 5:12 PM 2 comments: