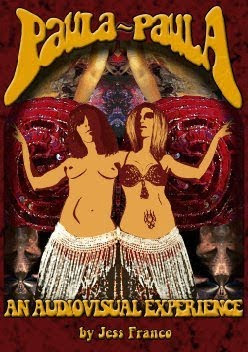 People always say that people will usually be split over a Jess Franco flick. Half will hate it, half will love it. I really think that Paula-Paula will be different. Because it's a tour de force and a wonderful flick? No. Because there are only 500 of these discs being produced. I think that this A a Franco film for the true Franco fans.
Being one of those I can say that I really like this movie.
Loosely based on Dr. Jekyll and Mr. Hyde, Paula-Paula tells the story of a stripper who has lost it. Apprently there is another Paula that has become a part of her and is also a dancer. Paula (Carmen Montes) is starting to lose it.
The movie is also about the music of Freidrich Gulda. This music was given to Franco by Gulda's family and Jess, being a jazz man decided this was the best way to showcase the work of the man who scored Franco's film Necronomicon.
So, it is a tribute film clothed in the usual fascination of the female form. I did think that it was interesting that Carmen Montes character appears in most of the normal shots while her doppelganger Paula (Played by Paula Davis) is in a mirrored, psychedelic shot for most of her screentime.
When Carmen Monte's character figures out what is going on there is only one, bloody recourse to solve her problem.
But will it?
Paula-Paula is a wonderful, moody, trippy 66 minute piece of genuine Franco. The disc is worth the price just for the interviews with Franco at his most candid. A truly great addition to the Franco realm.
And then there is my favorite reason to watch this film. A reason I have been spouting off about since Franco's Snakewoman.
Carmen Montes.
This woman is so adored by any camera that every scene that she is on the screen is pure bliss. It's a shame she doesn't do more film work.
Posted by Douglas A. Waltz at 5:45 AM No comments: 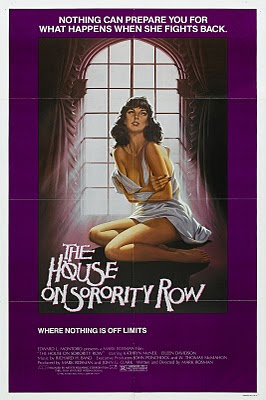 I'm not sure why I decided to revisit this flick. Maybe it was the remake or I saw an ad for the remake coming out on DVD, but I decided that it was time to wing my way back to the 80's to see what the girls at the House On Sorority row were up to.
The basics are simple. A domineering house mother clashes with a the slutty girl of the sorority because she wants to hold a party after the house is supposed to be closed up for the summer. It ends with the house mother shot and dead in the crummy pool that the sorority girls refuse to swim in.
That is until the body disappears and the girls start dropping like flies.
Back in the day if it was a slasher flick I saw it. That was the rule. Slasher flicks from the 80's are still one of my favorite time wasters.
Yeah, then I rewatched this thing. Lifting freely from the Friday The 13th plot, which usually wouldn't bother me, but this flick has one big minus sign;
All the girls have the biggest asses I have ever seen in my life. They try to play that these girls are hot, but, Man! These are some girls with a definite overload of junk in the trunk. I mean a lot of junk!
That being said, it comes across as one of the lesser of the slasher genre. It is a little light on story, there is some gore, but not enough and, thankfully, the nudity is kept to a minimum.
Sure, the chicks in the remake are gonna be hot, but this was here first so, it deserves its place in movie history.
Here's a trailer for ya.

Posted by Douglas A. Waltz at 1:47 PM No comments: