What's that? You're stuck somewhere you don;t want to be and forgot a book, but have Internet access? I have some good new for you!
Go here for some scary, sick fun and chase away those boredom blues. 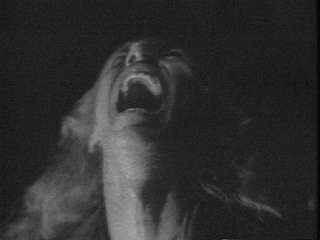 http://flashfictionfestival.blogspot.com/
Posted by Douglas A. Waltz at 3:04 AM No comments: 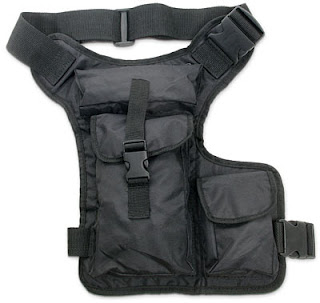 See that thing right above this? Pretty cool, huh? It's a Geek Holster. It goes around your waist and leg. You can get a right sided or left sided one. Or both for the uber geek. The lovely Martha got me one of these for my birthday this year. My birthday is June 25th.
I'm going to wait while you do the math to see how long I've had this thing.
Now, I am certainly no man of action, constantly on the go. I'm pretty sure we can all agree on this. I do ride my bike, take the stairs whenever possible and things like that while wearing the holster. But, it ain't like I'm a full time stunt man or firefighter or something.
In the short period of time that I have had it the Velcro on the larger pocket is gone. Just gone. The smaller pocket is also starting to go. That one worries more because there is no back up locking strap like on the larger pocket.
I wrote to Think Geek and told them of my plight. They agreed to an exchange if I supplied them with the receipt and various other information.
I do not have any of this stuff.
For $39.99 plus shipping I thought this would be a higher end kind of product. Sadly, I am mistaken.
Originally I was going to post this on my Dougservations blog, but then I considered something.
More people read this one. If I want the most people to get this valuable information on a product that I have raved about, this was the logical place to do that.
So, in conclusion, the Think Geek Holster is a cheap, piece of poorly made crap.
Don't bother.
Posted by Douglas A. Waltz at 9:00 AM No comments:

The Thing: Some Thoughts On The New Film

I love The Thing. For the juvenile amongst you, insert your snicker here. I have read the John W. Campbell story. The original with James Arness as a giant, malevolent carrot still gives me the creeps. 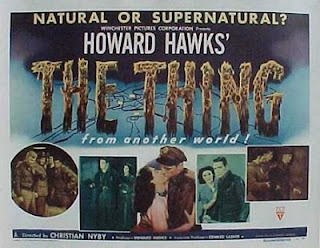 I have seen the John Carpenter version more times than most people would admit and it is probably one of my favorite flicks. The Playstation 2 video game plays like an epic sequel to the film.
In other words; I Love The Thing. If you need to snicker again, now would be an appropriate time. So, this sequel/prequel thingie.
What about that?
Well, they aren't trying to make a duplicate of the Carpenter flick so, that's a good thing, right?
Kind of.
See, with a prequel we already know what's going to happen. The Norwegian camp is a charred husk in the beginning of Carpenter's flick. Heck, it's an abandoned wasteland in Howard Hawk's original vision. None of the people in this flick are going to make it out alive.
And, if they do, then it's a cheat.
An unforgivable cheat.
All that being said; Am I going to see this flick?
Yeah, probably.
The true downside of the movie will be it's reliance on CGI effects. Rob Bottin's spectacular, practical effects didn't need it. Sure, they didn't exist, but I'd like to think he wouldn't have used them.
Now, why would I watch it? 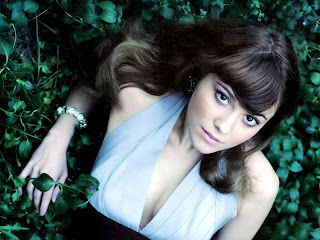 I doubt she's going to show much skin, but I like her in whatever she's in. Death Proof, Scott Pilgrim...you get the idea.
Besides, it doesn't violate my rules of remakes and I love a good horror flick in the ice and cold. I think it's because I live in Michigan.
Go figure.
Posted by Douglas A. Waltz at 3:39 AM 1 comment: 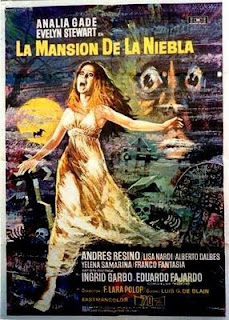 I bought the Chilling Mega Set a while back and decided to leaf through and see what I might have missed. The Murder Mansion (1972) is a clever little film even if the description of the film leads you to think you're getting something else.
A group of various people, caught by a thick fog, all wind up at the same deserted mansion next to a graveyard. You get the old, married couple, a hip, young couple who have just met, a hot rodding, hard drinking douchebag, a frightened young woman and their hostess for the night. The hostess owns the mansion, but does not live there. The fog trapped her as well.
But all is not what it seems.
A Spanish/Italian co production, The Murder Mansion or La Mansion de la niebla as it was originally known, is an atmospheric, tight little thriller. It takes a while to warm up, but when it gets going this is a fun flick. I did make the joke to the lovely Martha about halfway through that for a movie with murder in the title, the murdering was conspciously absent.
I would like to mention the guy on the motorcycle. The actor is Andres Resino  and he rides that thing everywhere! Through snow and sleet and fog. It was the snow that fascinated me the most. No where in America have I seen people use a motorcycle as transportation during the winter.  Why not? Sure, there might be control issues on ice, but clear streets abound in the winter. Why don't we use this fuel efficent form of transportation more often?
I'll bet as gasoline gets more expensive we will see this more often.
As for the movie; a well done, atmospheric thriller that once it gets going pays off in spades.