One last review before the month of exile begins. I had heard about this movie before and the trailer looked insane. Then I saw the Facebook post from my son, Dennis;

TURBO KID IS ON NETFLIX!!

Martha and I watched it immediately.

Set in the far flung future of 1997, Turbo Kid fondly brings back the post apocalyptic films that were triggered by the release of The Road Warrior. In this future the sky is filled with acid rain and the harsh landscape brings little in the way of nourishment. Our lead actor, Munro Chambers as the titular kid wanders the wasteland, scavenging what he can for water and comic books of his favorite super hero, Turbo Man.
Soon, he becomes acquainted with a hyperactive girl named Apple (Laurence Lebouef).
She is then captured by the hordes of Zeus (Michael Ironside) to be converted into water.
When the kid stumbles on the final resting place of Turbo Man, he know what he needs to do;
Save the girl.
Be a superhero.
This is such a wonderful movie. The second that Apple arrives on screen she steals the movie, in a good way. I felt like I had dusted off  one of my old, big box VHS tapes and watching a classic. Turbo Kid celebrates a time gone past when everyone was making post apocalyptic movies and they were fun and cheesy and a great watch.
It's on Netflix.
Go watch it.
You can thank me when I get back in March.
Posted by Douglas A. Waltz at 4:34 AM No comments:

I am about to embark on an experiment. For the entire month of February I will be offline. NO Internet of any kind. I use a 7 dollar TracFone that does not have Internet so no big deal there. I will be keeping notes and writing about each day in the month. Then it will become a book tentatively entitled InterWHAT? There will be illustrations by artist extraordinaire Stew Miller and I will publish it on CreateSpace.
I imagine I will get more reading done and writing as well. It sounds like it will be fun.
Worst case...it won't be.
Best case...I could discover that doing stuff non internet related is way more fun than skimming through my Facebook feed.
See you all in March.
Posted by Douglas A. Waltz at 4:47 AM No comments:

Apparently this dipshit cartoonist depicted the little boy who drowned that upset me last month as a sex fiend if he had been allowed to grow up.

In response, Queen Rania and Osama Hajjaj have done a different cartoon. I like this one much better. It is unnecessary for either of these people to go fuck themselves. They are class acts, unlike the first idiot.

He absolutely can go fuck himself.
Posted by Douglas A. Waltz at 11:15 AM No comments:

There has to be life on other planets, right? It just seems that the odds are too great in favor of this happening. In PLANET VOID, director Michael Legge gives us the idea of a planet similar to ours that had a meteor strike the planet, releasing a mold that kills anyone who is male. That's right, it's a planet of nothing but women.
Into this an alien approaches one of the women and impregnates her in the chance to bring women back to his ravaged world. In exchange he can offer her the return of men to hers.
Is that what Planet Void wants? They are able to procreate now without sex and able to keep the planet on an even keel. Do they need men messing that all up again?
The newest satirical comedy from director Michael Legge gives us a world of women knowing they don't need men to be successful. By throwing a classic science fiction plot of repopulating a dying planet he gives the women a chance to re examine their lives and decide what they want.
Anyone who know me or reads this blog knows that I am a huge Michael Legge fan. Everyone in The Waltz Compound is a huge fan. Legge gives the kind of comedy that works on more than one level. Sure, it could be seen as a straight forward sci fi flick with a bizarre plot twist. Or it can be seen as commentary on our world today. Sure, women are treated better than decades past, but there are still some pretty awful places to live if you're a woman. Eliminating the male of the species would probably alleviate, oh all of those problems. Do thy want to bring men back? Maybe they could teach the men not to be jackasses, but it sounds sketchy and they might not want to find out if it is worth the risk.
The cast is a cornucopia of previous Legge films. Lorna Nogueira shines as the lead being used by an alien to help bring women back to his world. Her life partner Cherry Lynn Zinger is always a delight to see onscreen. It's been a while since Mary Ellen Maloney has been in a Sideshow Cinema Production. It was nice to see her again. Linda Baxter Lasco is another favorite I was glad to see again and we can't forget the one and only Diane Mela who brought a snide sense of humor to her part.
The DVD is jam packed with extra goodies. The radio show Fussy Eagleton, Secret Busboy, a photo gallery, some trailers for other Sideshow Cinema epics and an interesting addition.
A Mondo Commentary. Legge took a truncated form of the film, did some commentary on it and showed some bloopers that occurred during certain shots. This was a really good idea. One I hope to see in future films.
PLANET VOID is a funny, satiric look at a planet of women who realize how good they've got it.
My only question is;
Why don't I have a Sideshow Cinema coffee mug?

Posted by Douglas A. Waltz at 2:09 PM No comments: So, Nick Carter gets a visit from the son of one of his oldest friends. Seems that dad is down in Rio building a power plant and bad things are happening. Nick heads down there on vacation to find his friend dead and an assassination plot devised by none other than Fidel Castro to take control of Rio!
This one plays pretty fast and loose with Nick roaming the countryside of Rio. Running from one clue to the next and trying to stop an international coup in the process.
There was a scene where the rebel leader smears a woman's breasts and crotch with honey and lets the rats at her that is diabolical. I really liked when he kept changing costumes in the crowds of Carnival to take out the group of assassins. To throw them off he even dressed in drag to throw them off the scent.
When Nick goes to question the wife of his friend and she starts to feed him some line about knowing nothing he just knocks her down and starts to beat the crap out of her. This might be the first time I remember Nick loosing his cool like that and beating a woman that wasn't some sort of Nazi ice goddess. The attack comes out of left field and throws you for a second, but it's Nick Carter. He know what he's doing. 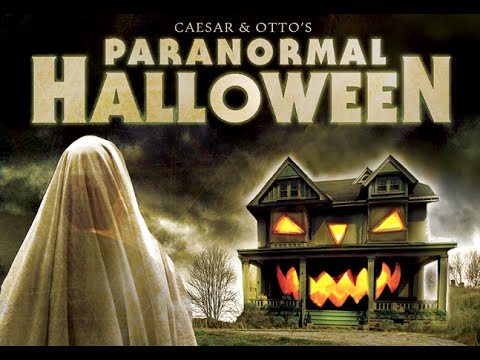 The boys are back in my favorite series. After skewering Summer Camp and Christmas it is time to make a visit to a haunted house in Caesar and Otto's Paranormal Halloween.
I really do love these movies. The slapstick aspect makes me laugh and the huge amount of awesome cameos don't hurt. I love that Ottos's mom is played by Beverly Randolph of Return of the Living Dead fame. She is still as cute as ever.
Vernon Wells is hilarious in his brief scene. Tiffany Shepis is always a pleasure to see as is Brinke Stevens.
Caesar, Otto and their dad are house sitting for a house with a history. Add in an amorous gardener and a psychotic cook and the boys have their hands full, especially when their dad goes off the rails after consuming some wine from a hidden cellar.
Throw in some evil politician's plans for California domination and Caesar and Otto ar, once again, in over their heads.
As far as entries go this was great. You can tell that director Dave Campfield keeps polishing his craft and this one felt like a lot more practical effects were employed instead of the amount of green screen work from the previous two films.
The movie never forgets to make fun of itself as it parodies films from Amityville to The Exorcist.
And, while we are promised a psychotic beach movie next, you know what I would really like?
I would like a TV series with these guys. Three films prove that they work as a comedy duo.
I can dream can't I?
Posted by Douglas A. Waltz at 8:59 AM 1 comment:

Why I Left (And why I decided to come back)

On December 3rd I saw a picture on the internet of a three year old Syrian child dead on the beach. It felt like I got punched in the gut. I was ready to be done. It hurt to look at it because I felt that by leaving him there they removed his dignity in this heartless world. 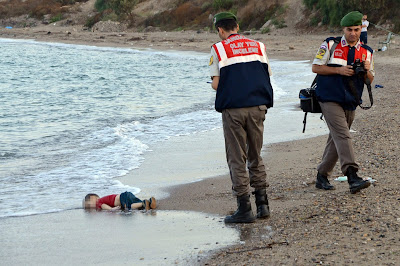 Yeah, CNN really needs to do more coverage on these things. There was another picture; 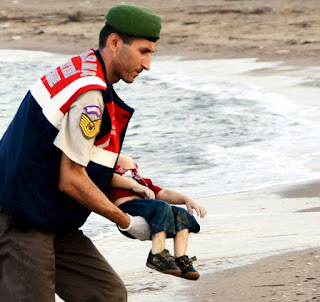 That poor man taking his time to cradle that poor, precious child who has been taken from this world. Do you see that grim look on his face? I make that face. It usually means I'm ready to hand out some serious damage.
And what can he do?
He has to pick up babies from the beach trying to escape from a terrible situation.
It's a big world out there people and people are assholes.
Child murdering assholes.
All I ever try to do on this blog is report interesting things. Maybe drop some knowledge and make someone smile.
I salute that poor man who had the decency to get that poor baby off the beach.
My opinion on Syrian refugees?
What the Hell?  Let them in. If some of them are murdering assholes, take care of it. But we really need to stop things that lead to pictures like this.
I'll be back later in the week or next week with some new Nick Carter reviews.
Nick Carter.
He would have just infiltrated Syria, fucked the good looking ladies, shot the bad guys and beat up a mad scientist's rape monster.
I love Nick Carter.
Posted by Douglas A. Waltz at 1:30 PM No comments: