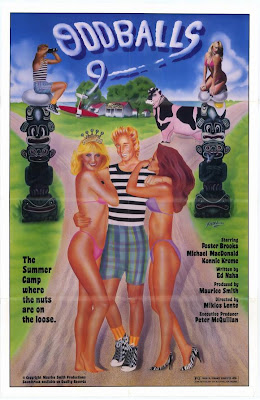 Hardly Basset (Foster Brooks) wins Camp Bottomout in a card game. He enlists his daughter Jennifer (Konnie Krome) to help out with the kids. Little do they know that across the lake a developer has his eyes on the camp to turn it into a shopping mall.
ODDBALLS is one of those wacky teen comedies that sort of goes above and beyond the call of duty. There are endless sight gags that can't be caught in one viewing. Everytime Hardly shoots a gun up in the air anything from Mary Poppins to The Wicked Witch Of The West come plummeting to the ground. The three main kids; Chris, Odd and Francois are on the make and looking for some hot girl action. Yeah, they kind of screw that up through the entire picture.
The movie works on its own logic as well. When a kid opens a door marked Men's Room he finds it full of men. He closes the door, writes a WO in front of the sign, reopens the door and it's filled with hot girls. Well, hot 80's girls, anyway.
This makes my second viewing and it is fun to try and spot everything that is going on in this imaginative little flick that appeared when summer camp movies were all the rage.
Plus, you can add this to all the movies in the world with Balls in the title. There are more than you think. Check out IMDB sometime.
Here's a clip;

Here at The Waltz Compound there are two things that are the same year after year for my birthday. One involves me and my wife not leaving the bedroom for a few hours and the other is that I get to do what I want for the day.
Everyone was lucky that I wanted pancakes with rum soaked pears for breakfast, but after that I watched movies.
Here's what went down at The Waltz Compound; 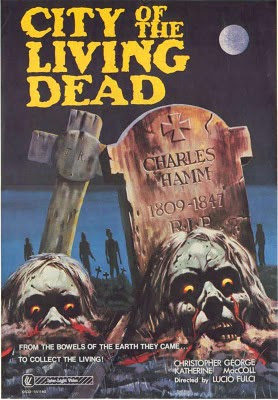 CITY OF THE LIVING DEAD

I can still remember sitting in Eastowne 5 theater watching this as THE GATES OF HELL. I thought it was awesome except for the part where the woman lost all of her guts out of her mouth and I had to make a mad dash to the bathroom to lose my popcorn. I watch this one once in a while and it just sticks in my head. A great, weird zombie flick. 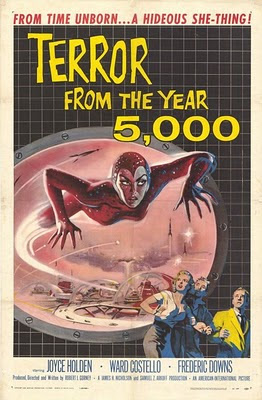 This one showed on Shock Theater when I was a kid and it scared the shit out of me! Now, I'm not sure what did it, but I suspect that the black and white photography coupled with the wild Florida swamplands did a number on my young skull. Another great flick. 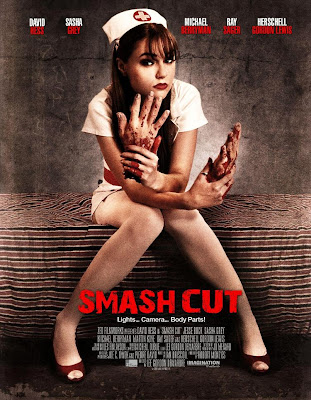 This is my first time for this flick and it was funny. A little too derivative for someone who has watched every H.G. Lewis movie in the world, but it was okay. David Hess looked like he was having a good time and Sasha Grey is always nice to look at. Shes what Misty Mundae would have been if she had done hardcore. Also, she takes a horrible profile shot. She works better at a three quarters shot. Probably why she poses like that all the time in her photos. Anyway, it was fun. 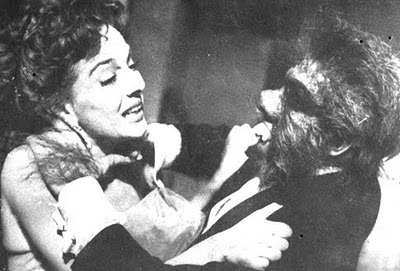 THE MAN AND THE MONSTER

Thought I would watch an old episode of THE DUNGEON OF DR. DRECK a horror host show out of the Boston area hosted by my good buddy, film maker Michael Legge. From the wilds of Mexico comes a really weird flick. Kind of Jekyll and Hyde, but more of a curse than anything and it only happens when he plays the piano. The monster is kind of silly, but for the time frame this is kind of a creepy monster fest.
Posted by Douglas A. Waltz at 3:38 PM No comments: 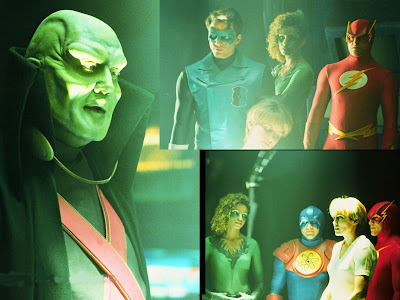 I have heard about this pilot for a while. I finally decided to watch it.
Oh.My.God.
I should listened. I should have stayed away. The least I can do is warn people. Warn others before it is too late for them. Think I'm exaggerating?
Watch this;

The guy from M*A*S*H* who plays Charles Winchester as The Martian Manhunter!?! Really???
And who decided that this was the line up:
Green Lantern/Guy Gardner
Fire
Ice
Martian Manhunter
The Flash
The Atom
And any concern about following DC history? Don't worry, they didn't follow any of it! Decades of rich, imaginative storylines and they don't use much more than their names. Barry Allen as an out of work schlub? Really?
The guys all seem to be wearing the same mask in different colors. And the costumes! My God, the costumes! They are horrible. And they make all the guys look pudgy. Even Fire and Ice have costumes that look like a horrible Vegas show that no one went to.
And did I mention that it was dull? Demon dull. The kind of dull where you want to take your eyes out with a cheese grater so you can stop watching.
This is the worst kind of bad acting, no consideration for the source kind of television programming that I can at least thank my lucky stars, didn't get by the pilot.
You have been warned. Stay away!
Posted by Douglas A. Waltz at 10:36 AM No comments: