I have tried to make New Year's resolutions year after year only to have them, like many people, fall by the wayside. I'm getting too old for that nonsense.
I did, however, find the perfect thing to face the next year.
This;


I like this.
I will be doing this.
Everyone have an excellent New Year.
Tomorrow I will release my list of best DVDs released in 2014.
You'll like my list.
It only has one entry.

Posted by Douglas A. Waltz at 4:34 AM No comments:

MERRY CHRISTMAS !!!
Posted by Douglas A. Waltz at 3:58 AM No comments: Being an unofficial biographer of Michael Legge has its moments. I always look forward to anything he does. In this case the new release gives us two movies for the price of one.
First up is The Brothers Dim who, if I'm correct had their debut in a short film The Lemon Man A pair of idiots who are 37 months behind in their rent and if they don't pay the landlord, will get evicted from their garage. Lucky for them, the landlord has lost his lucky penny he has had since birth. If they can locate that then they can live in the landlord's garage for the rest of their lives.
Taking the story telling aspect of a bizarre fairy tale, right down to the narrator being a physical person who they are constantly trying to get rid of and a fairy godmother who can grant wishes as long as they say it before her sparkler wand dies out, THE BROTHERS DIM has that absurdist quality of many of Legge's short films. Short and to the point this might not have worked as a feature, but is perfect at this length and makes for a great half of a double feature. 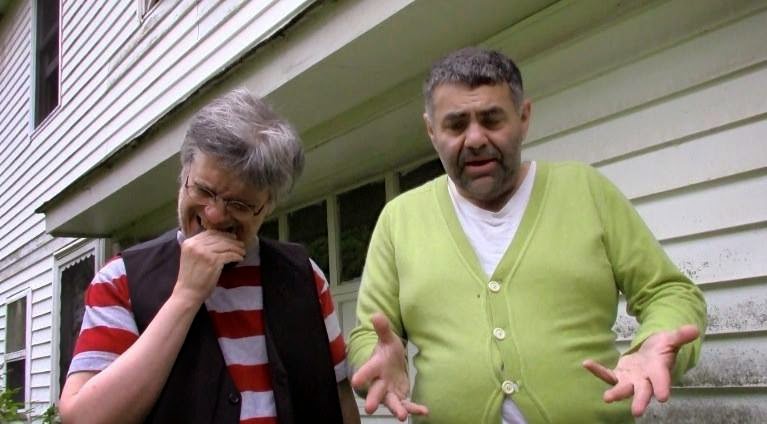 WHO STOLE SHRUNKEN ED? is for those of us who truly love Legge's horror host persona, Dr. Dreck. Over the years he has developed a repertory company of players that make us laugh between the B movies that he usually shows on his program. It also links in the plot from the Dr. Dreck feature film from a few years back for us truly fanatic fiends of THE DUNGEON OF DRECK. He could give us one of these every year in addition to the regular program to keep us in touch with the characters outside of their TV show setting. That would be awesome!
In addition to the two mini features we get a blooper reel that shows how much fun they are having on the set of both features and a short film from the far flung past that shows us that Michael Legge has always been a different kind of film maker. It's called HUMAN INTEREST and is one of the true highlights of the entire DVD. Kind of like unearthing a archaeological, cinematic find.
At this point I will be looking at dissecting this as well as MONOCHROMIA, his last film and the fascinating short film, HUMAN INTEREST for a revised edition of his biography.
Or I might wait. By the time I get that done, he might spring another movie on me.
Who knows?

And if this sounds like your kind of thing go HERE to order your copy today. I warn you though, Michael Legge movies are VERY addictive

Posted by Douglas A. Waltz at 9:48 AM No comments:

THE NEW ISSUE IS DONE!!! 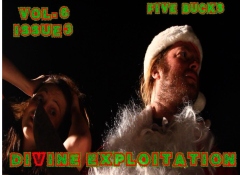 I'm at work so this is a pretty tiny image, it will not be this fuzzy on the actual product.
Now here's the scoop;

For some reason, even though I have changed nothing format wise from the previous two issues, the price went up. It is not five bucks it is five-fifty. I am of the opinion that this sucks so here is my solution;

You can PayPal me (Use the gift setting please or your money will be returned to you.) five bucks and where to send it and I will send it to you personally. Because of the inconvenience I will also be glad to sign the issue if you want, let me know in the paypal instructions. I am also famous for sending other things in the envelope like mini comics and the like so it will be a bonus. The five bucks will include shipping.
If you want it for Christmas order early.
Also, this is just for the US. I will be unable to ship overseas.

Have a Merry Christmas.

Stay Twisted!
Posted by Douglas A. Waltz at 7:52 AM No comments: