http://mjsmonkeyfistdoggietoys.blogspot.com
Posted by Douglas A. Waltz at 11:43 AM No comments:


and so many more.


Warlock Video will be there to do a blast from the past.


So many reasons to attend.


Only ten bucks a day!

REVIEWS OF MOVIES I HAVEN'T SEEN

I haven't done one of these in a while so, let's take a look at the films heading our way this week

First up is THE THING. I truly love Carpenter's film so, there is that remake worry, but we all know this is a prequel. The problem with that is we know what happens to all the people in the first base camp. No surprises here and it's hard to root for a group of people that we know are already doomed. The hot girl from Scott Pilgrim is going to be in it so there's your reason to watch this.

FOOTLOOSE is proof that there is zero originality in Hollywood. I won't be going to see this and I hope you do the same.

THE BIG YEAR. IS it too late for Steve Martin to be funny again? I would really like this to be fun. Stupid, laugh out loud fun. We'll see.

ROCK 'EM SOCK 'EM ROBOTS. Oh, I mean REAL STEEL with Wolverine in it. Yeahhhhh, maybe when it hits cable.

DREAM HOUSE. Isn't this just AMITYVILLE HORROR? I've already seen that one. Josh Brolin's dad and Superman's girlfriend were in it. I didn;t see either of them in the previews so I'm gonna pass.

WHAT'S YOUR NUMBER? has Anna Faris in it. Has she shown us her jumbly wumblys yet? Yeah, she's gonna want to do that before she gets leathery and scary looking. This looks dumb.

That's about all I can force myself through this time. I would like to mention LA PIEL QUE HABITO. A new film with Antonio Banderas that deals with some creepy themes and looks to be a Cronbergian delight. Search it out and watch it. As soon as I am able I will watch this.

Watch a good movie this weekend. Unfortunately, it doesn't look like that will happen at your local multiplex.

Posted by Douglas A. Waltz at 5:23 AM No comments:

http://penguincomicsnet.blogspot.com/2011/10/dvd-round-up.html
Posted by Douglas A. Waltz at 10:13 AM No comments: 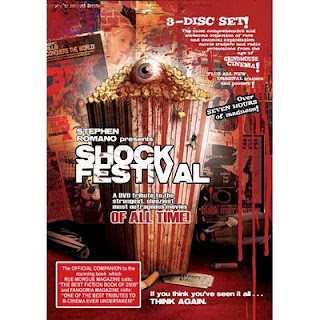 Picked up this three disc set at Cinema Wasteland last week. It's trailers, trailers and more trailers. The fun part is the fake trailers. See Stephen Romano did this book called, interestingly enough, Shock Festival. It's a book of movies and their ad campaigns that never existed. Sounds like fun and when the price goes down I might get one.
In the meantime, I got the box set. Put out by Alternative Cinema, this is the tour de force of trailer compilations. I have watched my fair share of trailers and am used to some repetition, but not this time. Lots of fun filled trailers as well as the fake ones being truly entertaining. Throw in a disc of music and stuff and you have what might be the best compilation I have ever seen.
The unfortunate part is that there are movies of actual trailers that I am going to have to hunt down and watch.

DAMMIT!
Posted by Douglas A. Waltz at 5:19 PM No comments:

The yester years of shot on video or SOV as it is popularly known, is back with a vengeance. Alternative Cinema released their new feature, The Basement, on big box VHS. The craptastic slasher flick 555 is back in the land of big box, even if it is waaaaay over priced.
And then there's Warlock Video. A blast from the past with a huge slate of films on the horizon.
This is what is released so far; 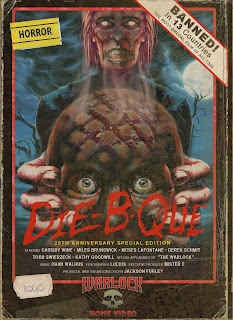 Some kids decide it's time to party and have some grilled meat. Except this grilled meat has different ideas. Chock full of extras and available in the big box format or the loaded with extras DVD, Die B Que embraces all that is sick and wrong about the SOV flicks of the late 80's. There is no way you can afford to miss this flagship title of Warlock Video. 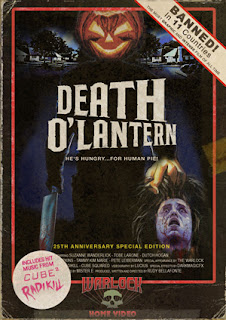 When a psycho in a jack o lantern mask decides to start killing the locals its up to a group of movie geek kids to bring him down. Filled with the streaming gore we have come to expect from the flick of this time period, Death O Lantern does not disappoint. Also available in the DVD and VHS formats. 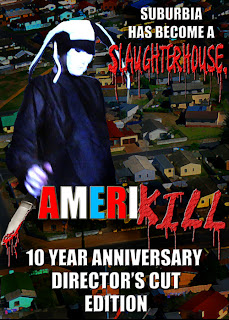 Bask in the glow of the early work of film maker Chris LaMartina. When a psycho in a robe and a Jester mask descends on a quiet little town, he has one thing on his mind; To kill everyone! Creative kills and a compelling storyline that has one of the weirdest twist endings of all time, Amerikill is definitely something that needs to be on your movie shelf. And you can have it in both DVD and VHS formats. 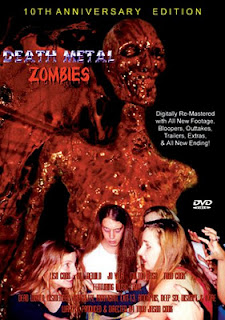 Just let that name roll off your tongue for a moment. Revel in the sounds of the syllables as you say it. Zombies chew up the death metal scene as a special song, when played, turns the death metal kids into gut munching undead. Combine a soundtrack jam packed with some of the most off beat death metal of its time with girls willing to show us their goodies and you have a classic back from the SOV grave to amaze us all. And you should know by now what formats this comes in. 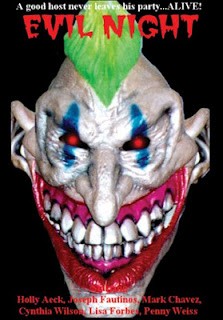 When a bunch of frat boys pull a prank on Jimmy they unleash their worst nightmares. Jimmy develops demonic powers and wades through them with a path of destruction like none seen before. Original kills, a creepy clown mask and that 80's veneer of SOV makes for a classic back thanks to Warlock in both DVD and VHS.

There you have it folks. The return of SOV with many more on their way to amaze and disgust you. Can your heart stand the shock of...WARLOCK VIDEO.


Check out the details at WARLOCK VIDEO.
Posted by Douglas A. Waltz at 3:35 AM No comments: