I have reviews that I only put in the print magazine. I have reviews that only show up here.
Then there is when they appear in both. The internet can be a cruel place, but it is also a great place to network and make sure people are seeing things that the mainstream doesn't have to offer.
RAZOR DAYS is one of those things.
Here's the review; 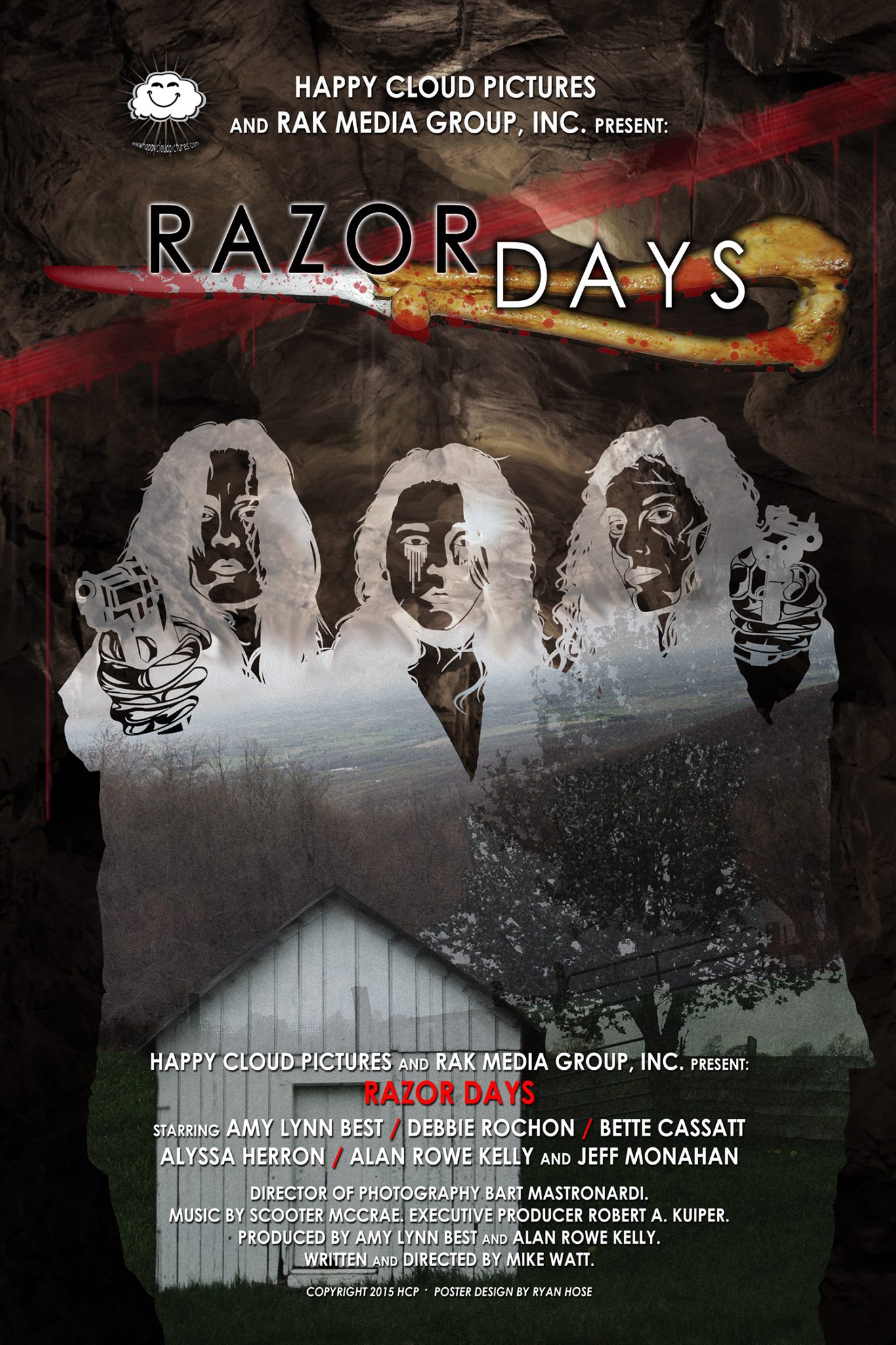 Anita (Amy Lynn Best) helps women become stronger. She helps at a self defense class meant to empower women. She counsels women. Into her life comes Jessamay (Debbie Rochon) the infamous ‘Cannibal Girl’. She had been captured by the family, her boyfriend killed and eaten by the cannibalistic trio. She was tortured, raped and scarred for life. She is coping with this by filling herself with a white hot rage that wants revenge.
Bloody, apocalyptic revenge.
She tells Anita that she can’t be the only one. The only one who managed to escape from the clutches of these madmen. Anita’s ex husband, John (Jeff Monahan) is a police detective so she asks him to look for others like Anita. She believes that if she comes face to face with another survivor it may help.

John turns up Rena (Bette Cassatt) living on the other side of the state. They go to visit and Jessamay and Rena immediately click. Their common ground brings them together immediately.
It’s too bad that no one else believes their stories. They don’t believe that cannibals exist in the modern world. They believe that Jessamay and Rena did this to themselves for attention. We, the viewers, are given proof that they haven’t, but we’re not in the movie. We are just forced to watch them struggle with their own reality.
Now that Jessamay has a sister in suffering it’s time to make the bastards that did this to them pay.
Anita goes with them to keep them from going off the path of being a rational human being, but she has a past that keeps bringing her own feelings to the surface.
Now, they are ready to go after what did this to them and destroy them once and for all. They believe if they can do this they will save others from what they have been changed into. They also believe, a little, that if they murder these monsters in the shape of men that their own demons will be laid to rest once and for all.
Except, one of them has not been completely honest with the other two and that could be the one thing that will destroy them once and for all.
I first saw Razor Days at the convention, Cinema Wasteland. I like to watch new films there. You get such a variety of things from funny to gross to, well in the case of Razor Days, a powerful drama that forces you to watch horrific things.
It was a lot to take in and it had been awhile since that viewing so I knew I needed to go back one more time. What can I say? I’m old and my memory isn’t what it used to be.
Each of the characters felt like a different aspect of a single person. Anita was the cool, logical persona that stops us from screaming at the impenetrable darkness. Jessamay is our pure rage that screams at the darkness regardless of what that will accomplish. Rena is the fragility of the human spirit that has been crushed by man’s inhumanity towards man.
Individually, they are impotent. Jessamay knows that she needs another kindred spirit to force her to face her fears and crush them. Anita sees the damage that these other women have suffered and even though her scars are internal, she feels the same as they do. Rena has surrendered to her situation, but there is that little glimmer within her that, if properly fanned, will erupt into a blaze much hotter than either of the other women are capable of.

There is a scene in a quarry where the three women are arguing in the rain about taking the next step. They are parked outside of the farm where they believe their tormentors are located. As Anita and Jessamay argue, Rena starts to walk away and the camera acknowledges the other two, but their voices fade as Rena takes slow measured steps towards the farm. Her face that looks like a fragile china doll that has been shattered and put back together, is set in a look of determination more chilling than anything Jessamay has shown us. The rain falls, the camera follows and Rena with each step becomes something more. She believes in her heart that this is what will save her from that fear. The fear of everything. Just before Anita calls to her and breaks the moment we see it in her face. She is ready to rain death and destruction on people that have done this to her.
The scene in truly chilling and Bette Cassatt makes us forget she’s acting. The character of Rena is fully realized and makes us a little afraid.
The slaughter at the farmhouse just takes it a step farther as she confirms it with her action.
All three of these fine actors deserve praise for what they bring to Razor Days. Amy Lynn Best gives us a woman who has gone through something that has taken her soul and twisted it a little. Her pain comes from love turning into something dark. In every scene that she is forced to argue with these other two women you can see the conflict on her face. She is operating on the fact that murder is wrong. Her emotions betray her at every step and Best conveys this with every line. The scene in the car between her and Bette she thinks she can at least get to her and change her mind. But, you see with every no she speaks a yes comes out of her eyes. Debbie Rochon gives us a woman who has embraced her rage to keep her warm. Of the three she could be the most upfront in what she shows us. The one that truly sticks out for me is Bette Cassatt. She gives off such a sense of fragility from the moment we see her. She is thin, timid, her porcelain face enveloped in these wicked razor scars. The previous china doll reference seems to fit perfectly. She exudes a sense of someone who just wants to be left alone. She tried the world and the world beat her down. When she decides to go all the way into a revenge plan with Jessamay, her conversion is the most frightening of the three of them. Anita embraces fighting back at her defense classes; Jessamay embodies rage with her body movement, her attitude. Even her huge, ragged scar on her face seems to scream rage at you. In comparison, the thin, white scars of Rena fool you with a false beauty that comes back to haunt you. When she transforms it is the most severe of the three and you’re not sure whether to be proud of her for facing her fears or heartbroken that she is falling into something that might not even help. Because what if what you see as the solution to your problems doesn’t help? What if you take a step forward that can’t be taken back? What if and this is the worst part, what if it makes you into that which you are trying to destroy?

Finally, I do have to mention the film as a whole. Scenes evaporate into one another. Dialogue comes from other scenes. Sometimes there is dialogue and no one is talking. It gives a weird, reality bending feel to the entire film that helps keep you in the film itself. Most films follow a strict order of scene after scene with and without dialogue. This disconnected array of scenes that stop and reverse and time lapse and sometimes people’s mouths aren’t moving, but they have dialogue, keeps you in the moment. You can’t watch it like a normal narrative in fear you might miss something. Bravo to Mr. Watt for making the film an actual character in the movie. It warps and slides around in a manner that you don’t see in the traditional world of film making and it makes Razor Days better for it.
In the end Razor Days is another fine entry in the catalogue of Happy Cloud Media and Mike Watt challenges you to look at film in a way that very few directors do.

Posted by Douglas A. Waltz at 1:46 PM No comments: