A while back I mentioned how Ain't It Cool News has just lost touch and needs to go away.
Apparently this is also true of Roger Ebert.
A very long time ago when it was still Siskel and Ebert, they made the decision to ruin the end of Friday the 13th. They actually gave away the plot ending to encourage people not to go see the movie.
As a film reviewer I find this behavior reprehensible. It's like breaking the cardinal rule of reviewing. Plus, it's just bad form. If you don't like a movie there are many ways to encourage people not to go see a flick.
Now, Mr. Ebert is at it again. The film in question; KICK-ASS and no, he didn't like it. I think that Roger's recent battle with cancer where his face has been mutilated and his actual voice taken away that its time to go quietly into the night. He doesn't have to die or anything, but he needs to stop working. I think that his mindset makes him incapable of writing an unbiased review of any kind.
His time is over and his review of KICK-ASS proves it.
Posted by Douglas A. Waltz at 5:46 AM No comments: 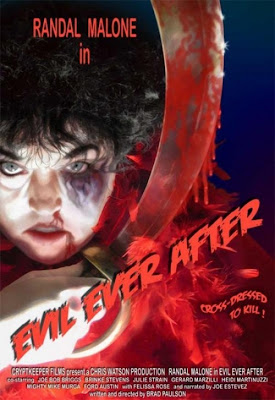 I don't know why I downloaded this flick and then the opening credits ran. There was Joe Bob Briggs, Brinke Stevens, Hell even Heidi MArtinuzzi was in it.
And Randal Malone was in it.
See, I watched this flick forever ago called Dead Season. Ii was like Misery by Steven King, but he gets along with his stalker and invites her in. Add to that I'm pretty sure that
A.) The flick was lensed in Florida and I am a sucker for low budget Florida flicks.
B.) They use Randal Malone's house and it looks like it was decorated by Liberace.
Now for the recap.
Little Bernie is a normal enough kid. Until he discovers that his mother and father are cannibals. They introduce him to human flesh and he never turns back. Dad even lets him go hunting with him. He revels in the murder and cannibalism.
Then a crooked cop slays his parents because they were behind on their protection money. He lets Bernie live and Bernie grows up to inherit the family mortuary where he is able to satisfy his habits without killing anyone.
This goes pretty well until Ashley (Heidi Martinuzzi) gets bored one day and attempts to seduce Bernie. Bernie will have none of it and the little neighborhood slut wastes no time in telling her father and her boyfriend.
Her father, played by Joe Bob, is the chief of police. He can't be involved with any kind of vengeance so he sends the crooked cop and his partner to teach Bernie a lesson. Which they do by raping him after making him get in a dress.
When they are done with him Ashley's boyfriend and crew go snatch Bernie from his house, take him to the woods and beat the shit out of him and leave him for dead.
Newsflash! Bernie ain't dead. He's a beaten and abused cannibal wearing a dress and wielding a samurai sword and he's coming for ultimate revenge on all the bad people in the world.
This was a great flick! The rape, degrading violence is pretty over the top and can make you feel uncomfortable, but when Bernie gets into form this is a new classic of the slasher genre that can not be ignored. 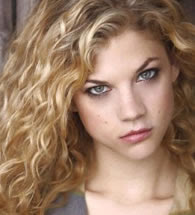 Oh, and the original reason for me watching the flick is the pretty Rebekah Brandes who was in Midnight Movie which I also watched. She's playing a bitch this time, but still pretty cute. Heidi Martinuzzi's boobs were nice to see.
While Mr. Malone comes across as a more effeminate version of Divine, his fascinating house coupled with the fact that this man throws himself into any role he does, makes EVIL EVER AFTER well worth watching.

Posted by Douglas A. Waltz at 9:41 AM No comments: 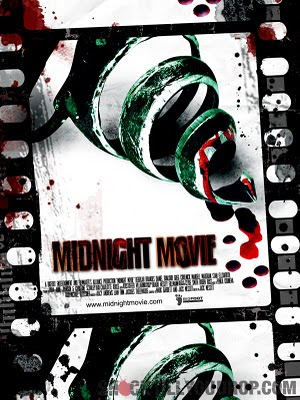 So, I'm puttering around at home on Monday because I don't have a lot to do until class Monday night. Anyway, we have Charter Cable and while a majority of it sucks, they have this thing called On Demand where you can watch what you want, when you want. So, I read the description of this flick and decided that I would watch it.
Here's how that went. 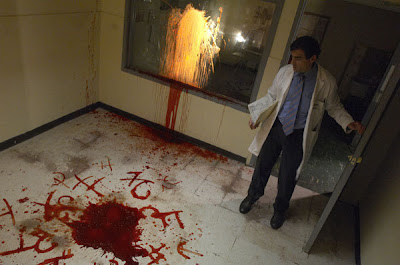 Midnight Movie is about this guy who made a film called The Dark Beneath that he becomes totally obsessed about. He is obsessed with scaring people and for the film he directed, wrote and starred as the skull masked killer with the unique spiral drill weapon of choice. He becomes so obsessed with the film that he manages to merge with it and slaughter an entire ward at the insane asylum. Oh yeah, he was at the asylum because the movie made him bug nuts. 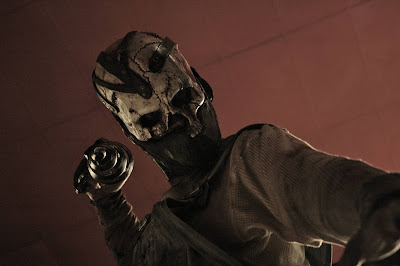 Now we flash forward about five years where this little one screen theater is doing a midnight screening of The Dark Beneath. It's a small crowd of teenagers, bikers and a police detective and a doctor. Seems the last two are there to catch a killer. They have no idea what they are in for.
See, the killer in the film can detect fear. When that occurs in the real world he comes here and slaughters his victim. That becomes part of the movie. when the movie is playing the killer is able to manipulate reality in such a way as there is no escape from the theater, cell phones don't work. This group is going to have to survive on their wits.
Lead cute girl Bridget, played by devastatingly gorgeous Rebekah Brandes has the ante upped when she discovers her little brother has snuck into the theater. But Bridget has an edge that no one else, not even the man mountain biker trapped with her, has. Her father was one of those abusive pricks and she has the physical scars to prove it. She didn't let her own father hurt her little brother.
What chance does a psychotic movie monster have? 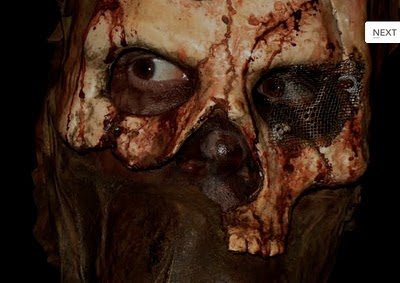 I really liked how they Incorporated the older film (Not a real older film, but I appreciated the attempt to make it look old) into what was going on in the theater. While a lot of the characters were stereotypes you got a few gems a long the way. The huge biker I mentioned previously having claustrophobia for one.
The lead, Rebekah Brandes brings believability to an unbelievable situation. And, I thought this was interesting, the less afraid she becomes of the killer the less of a threat he appears to be onscreen. I don't know if that was intentional on the film makers part, but it worked really well. 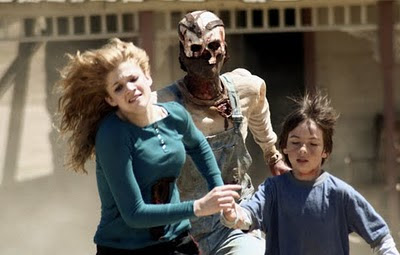 This was a definite throwback to the good old fashioned slasher flicks of the 80's and I was glad to have watched it. A definite good time.

Posted by Douglas A. Waltz at 8:41 AM No comments: 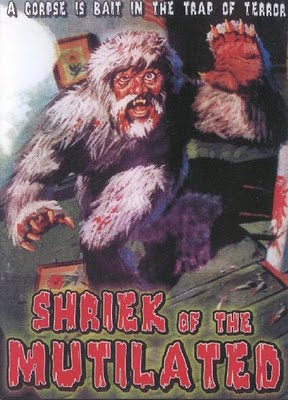 This is one of those movies where everyone has written it up and discussed it, but i never get around to watching it. Then I did.
It's time to discuss Shriek Of The Mutilated boys and girls. I can't promise that there won't be spoilers, but no promises.
ready?
Let's mutilate!
Okay, there's a college professor who plans on taking some students upstate for a search for the yeti. Apparently this search has gone on before and people have died. That won't be stopping our erstwhile group of heroes.
Without a doubt my favorite part is during the party where a former student of the professor's show up with his girl and begins to drink and spout off about what has gone before and how he is the only survivor.
They go home where she is pissed about his behavior. He's pissed because she has hidden the liquor. So, he slits her throat with an electric carving knife and hits the tub with a brewski or five. 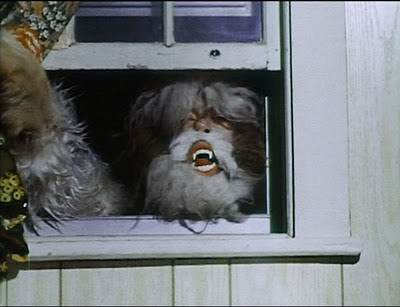 Yeah, only she's not dead and manages to crawl to the bathroom with a toaster in tow and plugs the sucker in and throws it in the tub.
WITH A SLIT THROAT!!
I've said it before and it needs saying again here, gentlemen.
Do not piss off your lady!
Really? she crawled through an apartment and managed to plug in a toaster and throw it in a tub before dying. Sheesh! That's one pissed off woman!
Then our group shows up on the island and it isn't long before our first victim, Tom, is assaulted by the yeti. I though the monster looked like a giant Pekingese, but who am I to judge.
It was at this time that I thought that Tom looked a lot like the head weirdo with the magical walking stick in Invasion Of The Blood Farmers.
Yup, it was him. I have officially watched too damned many movies at this point.
I stuck with the flick. It wasn't too bad. Could have used some boobies, but I got over it. 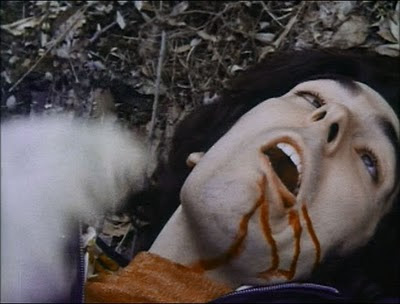 The twist at the end was cool even though I saw it coming from a mile off.
I realize that I'm probably the last guy to see this thing, but if for whatever reason you have passed on this I would say that now is the time to experience Shriek Of The Mutilated.
You'll be glad you did.

Posted by Douglas A. Waltz at 6:49 PM No comments: