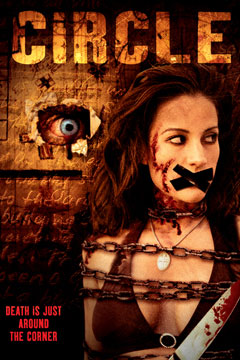 So, there’s this sociopath by the name of James Bennett (Sila Weir Mitchell, who was excellent as Haywire in the Prison Break television series. He manages to get out of a high security prison with dead bodies in his wake. He’s headed home.
This is bad for a group of students that are studying his home turf for a thesis they are working on.
Yeah, you can see how this is going to roll, don’t you?
This comes across as a new kind of grindhouse kind of flick. One of those filled with gore, psychos and really cute ladies. Titillation at many levels.
Mitchell was one of my favorite parts of Prison Break, of which I was one of those huge fans. I thought he did very well in that role. He brings that kind of intensity turned up to eleven for the roll of Bennett.
For me the reason to watch this was America Olivo, one of my favorites from the flick Bitch Slap. She brings that vibe with her to this flick. Maybe not as severe, but she is definitely the one to watch in Circle.
The DVD has previews and a featurette.
CIRCLE delivers on everything and that is something to praise in a time where a lot of smaller budgeted films tend to cheat the viewer. Circle doesn’t make that mistake.

Posted by Douglas A. Waltz at 4:33 PM No comments: 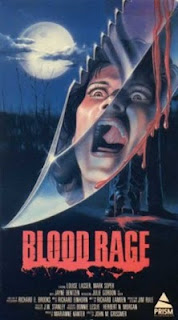 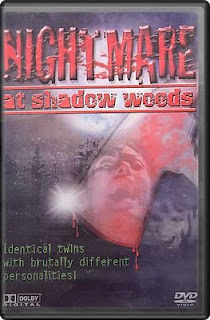 I have no idea why I watched this flick. I think for no other reason than it was an 80's slasher flick and an unhealthy, nonsexual obsession with Louise Lasser.
So, there are these twin boys in the back of a station wagon at the drive in with their mom and her boyfriend. Mom (Louise Lasser) and the boy toy are soon necking and the boys are bored. They wander through the drive in and come across a hatchet in the back of a truck and then a couple making out. The evil twin, Terry, plants that sucker in the guy's head while he's getting a little action. Then he takes the hatchet, gives it to his brother Todd and wipes blood on him before screaming bloody murder. With this flimsy evidence, Todd is placed in an asylum.
Ten years later, it is Thanksgiving and Todd is starting to remember things. Things like he didn't kill anyone, but he knows who did.
﻿ ﻿
Time to head home.
Mom and Terry are informed of Todd's escape and Terry is elated. Time to go on a killing spree and blame it on his twin brother! Joy!
﻿ ﻿
For a slasher flick, this isn't bad. Plenty of T&A, plenty of gore. Louise Lasser brings her twitchy A game to the proceedings.
But there was something that stuck in my craw. and if you're unfamiliar with where your craw is located, make a comment and I'll be sure to post an answer. Anyway, the grown up version of Terry and Todd. I knew it was one actor, no big deal there. But why did he look so familiar/
I checked.
﻿ ﻿
In the film The World According To Garp he's the college student that Robin Williams wife is fooling around with until she bites his dick off in the driveway.
Weird.
﻿ ﻿
Anyway, the end of this movie is just a hoot and while we see it coming the characters don't and it has a great 80's feel to it.
One thing though. With all the holiday films released in the 80's, why not truss this one up like a Thanksgiving turkey and trot it out for people to watch. New Year's Eve, Valentine's Day, Graduation Day, Halloween, April Fool's Day amongst a slew of others did alright for themselves. This one already had two titles going in, one more wouldn't hurt.
﻿ ﻿
Someone needs to find an original print, track down some actors and retitle this sucker Thanksgiving Day. Since Eli Roth isn't giving us his holiday shocker any time soon, it would be perfect.
Blood Rage

Posted by Douglas A. Waltz at 5:15 AM No comments: 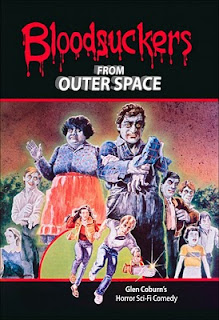 Every year, in the beginning of October I attend the best film convention ever. It's called Cinema Wasteland and if you've never been you should go. It is the most fun ever. So, I'm at the convention, checking out the guests and whatnot and there's this guy sitting at a table and he's selling a movie called Bloodsuckers From Outer Space. Great title and I've never heard of it. Apparently he made it in 1984 and is releasing it on DVD. I am a big fan of cheesy 80's flicks and Bloodsuckers From Outer Space looked to be no exception. The director, Glen Coburn, signed my DVD sleeve for me and I got a flick for 6 bucks. I figured I could gamble six bucks.
Best six bucks I ever spent. 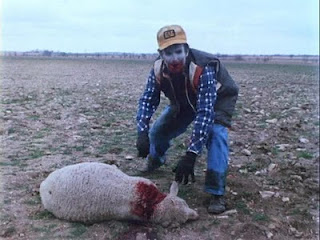 The basic premise is this alien force that invades human bodies, forces them to expel all of their bodily fluids, possess the humans and then go around sucking the blood from other humans. The downer side is that if they kill you, you stay dead.
This small hick town in Texas is home to a facility called Research City. Government cuts have brought the scientists down to the bare minimum, but they have the coolest thing to study. Their head honcho has become possessed by one of the aliens and they are trying to figure out what makes him tick.
Meanwhile, newspaper photographer Jeff is starting to piece together what is happening. It doesn't hurt that he has to have a kung fu battle with his uncle who has been turned into a bloodsucker. 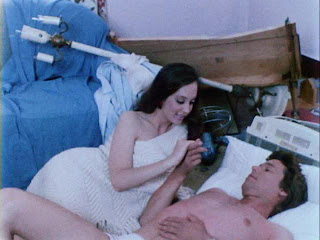 The interesting thing about this film is that it opens and closes with two magnificent cherry picker shots. Then the rest of the film is static shots. No zooms, no pans, nothing. Just static shots. And it works for this movie. You don't even realize it's happening until someone points it out to you. 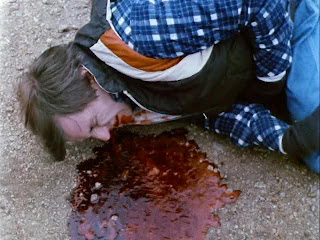 The film is filled with wry humor, the characters are aware that they are in a film. They address the camera a few times and the best line is 'That incidental music sure is creepy.' Genius!
Add to that a rocking 80's theme song, a crazed general who just wants to nuke the problem and a bizarre cast of characters the likes of which you have never seen before in your life.

Bloodsuckers From Outer Space has that great, grainy feel to it that only comes from actual film, not video. The effects are the spray kind that permeated 80s flicks. And did I mention a Pat Paulsen cameo? Well, now I did. 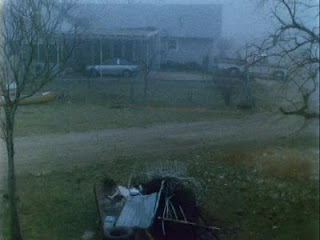 There is a 24 year reunion of a lot of the cast and while it would have been cool to see the lead or his love interest make an appearance, this was still an informative half hour. Now if it just had a commentary it would have been perfect. 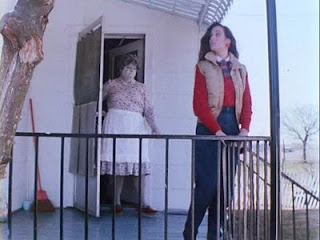 You're gonna want this movie as soon as possible.
This has my vote for best DVD release of the year.
Posted by Douglas A. Waltz at 4:50 PM 1 comment:

Psychomania and Crucible Of Terror 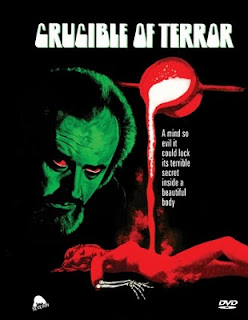 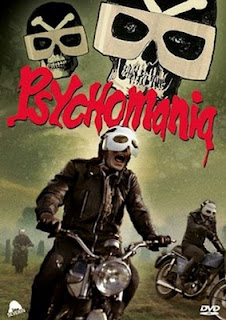 Severin Films have again graced us with two strange ones from the vault.
First up is Psychomania (1972) which tells the tale of a motorcycle gang that comes back from the dead to terrorize the living. And once they come back nothing can stop them. A mixture of biker flick, psychedelic, trippy movie and supernatural clap trap all blended well with George Saunders and you have an idea of what is going on here. Throw is some pretty good motorcycle stunts and you have a film that stays in your memory whether you want it to or not.
There is a great documentary Return Of The Living Dead that talks with a lot of the cast and their remembrances of making the film. A completely worthless introduction by Fangoria editor Chris Alexander along with interviews with John Cameron the composer of the film and Singer Harvey Andrews who sings a song in the film. Severin has given us the best print available of the print which is far better than anything I have seen before. Loaded with extras it's time to get Psychomania before it gets you!

Then there is Crucible of Terror. I had never heard of this or it's star Mike Raven before. I knew Ronald LAcey from RAiders Of The Lost Ark and it was nice to see him in something else. I thought that Mike Raven was channeling the spirit of Boris Karloff in the flick. Unless, he just talks like that all the time and then it would just be a fluke.
Crucible of Terror deals with an artist and his obsession with the female form. I thought it interesting that Severin got the print from a Bodmin Moor coven and I did not see the twist ending coming. Who would? The truly disappointing thing would have to be the complete lack of extras for this flick. No trailers, no behind the scenes stuff, no anything. Just the story of how they got the print would have made for an interesting little featurette.
So, Psychomania is a perfect release with just the right amount of extras while Crucible of Terror is a missed opportunity, albeit a good film.

There is just one thing I wanted to mention about Psychomania that might ruin it for everyone who hasn't seen it. At the end of the flick where the mother turns into a frog and the biker gang turns to stone the ending credits are of George Saunders approaching the grief stricken Abby, the only survivor of the flick. I find it maddening that we never hear what he was going to say to her. Anyone else out there with similar feelings? Makes the flick more fun because you can insert what you think is going on, but we will never know for sure. Pity.
Posted by Douglas A. Waltz at 12:38 PM No comments:

Another great weekend held by the Kish family in Strongsville just south of Cleveland.
Highlights;
First thing, director Bill Zebub hands me a card promoting his new movie, Zombie Christ. It has a naked nun with a shaved cooter on it. Always fun to start the convention with a bang.
Handed out copies of my chapbook, Attack Of The Creatures From The Unknown, to various guests and Tom Sullivan, Effects Guru, let me get a signed print of one of his pics. Very cool.
Met Herschell Gordon Lewis and he signed my book that I have owned since 1983.
At the A Ghastlee Night At The Movies I got a free t shirt, participated in the birth of The Son Of C'thulu, won the trivia contest and got free passes to the April Show and did a sing along with H.G. Lewis to the theme song from his flick 2000 Maniacs.
Watched a small Asian woman crush ten beer cans, five at a time, with her cooter. Yes, her cooter.
Hung out with Gore DeVol.
Met Joey Smack.
Got a few DVDs.
Bought t shirts for all my children and Martha.
Got a lot of cool freebies.
Chatted with the always delightful Ruby LaRocca.
And much more!

Video to follow in the near future.
Posted by Douglas A. Waltz at 5:20 PM No comments: