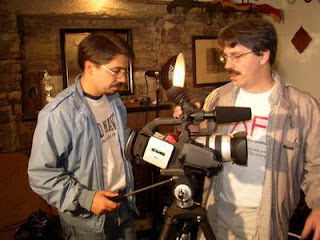 It is with a heavy heart that I report that John Polonia of the Polonia Brothers has passed away yesterday from a heart aneurysm. This truly sucks and there is no nice way of putting it. We here at Divine Exploitation mourn the loss of a true pioneer in micro budget film making. He will be sorely missed. Hopefully, his brother, Mark, will continue the legacy began by this prolific duo back in their teen years.
The Polonia Brothers managed to make thirty movies in a twenty year span. Not bad for movies that sometimes had a budget of less than a hundred dollars.
Do yourself a favor and seek out a couple of the Polonia Brothers films today and bask in the glory of films made for the pure love of films. Recommendations would be SPLATTER FARM, FEEDERS and AMONG US.
Our heartfelt condolences go out to his family, his wife and young son and all who knew John Polonia for what he was, a kind, caring human being.
We miss you already.
Posted by Douglas A. Waltz at 3:53 AM No comments: 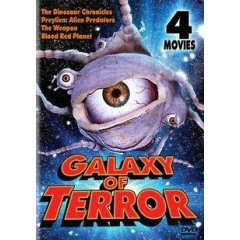 Yeah, you wish it was the 80's flick with Sid Haig and Joannie from Happy Days. Hell, I wish it was, but it's just a title of a four pack from our good friends at Brentwood. I got this for one reason and one reason only.
I have a sickness.
I watch Polonia Brother movies on purpose.
If you don't know who the Polonia Brothers are, then you have no idea what you are missing. This amazing duo of micro budget film making have been around for decades and if you've seen one Polonia Brothers flick then you need to see them all.
The only downside to this collection is there is one non-POlonia flick in the bunch. It's called THE WEAPON and it stinks on ice.
We do have three winners so lets discuss them one at a time.
First up we have PREYLIEN:ALIEN PREDATORS. An alien space ship filled with alien creatures plummets to Earth and the monsters get out and start to wreak havoc in the woods. It's up to a rag tag band of people to eliminate the threat and save mankind. Even the pilot of this ship is a bit of an ass and needs to be destroyed.
This one feels so much like a bizarre mix of power rangers and an episode of Doctor Who without The Doctor. We get cheesy monster suits, lots of action in a quarry, and low production values. But, you know what? This was ten times more enjoyable than a lot of the dreck that isdsues from the wound known as Hollywood. The flick moves along and manages to give us a quality piece of science fiction that would make Roger Corman proud. The cover monster of the box set comes from this flick. And as for the term Preylien. Does this mean that the Aliens VS. Predator franchise owes The Polonia Brothers some bucks for coming up with this name? Sounds like they do, but it will never happen. 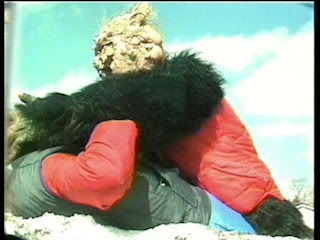 BLOOD RED PLANET is a throwback to old school sci fi from Europe. If you didn't know better you'd think this was one of those flicks, but we have Jon McBride and one of the Polonias so, we are firmly lodged in the states for this endeavor.
It seems that there is a run away planetoid that has a monster on it that threatens to destroy all of Earth. The crew of the Omega 1 have to intercept the planetoid and discover the horror that lurks on the BLOOD RED PLANET. If PREYLIEN was a throwback to Corman, this one reeks of old school Italian sci fi flicks with that special Polonia flavor. And the addition of Jon McBride is always a plus for The Polonia Brothers. 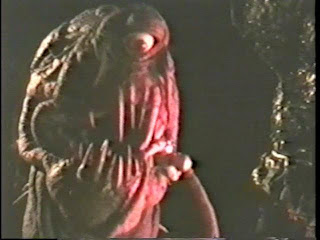 THE DINOSAUR CHRONICLES is probably the weakest of the trio. Consisting of two shorter flicks. We get some bargain basement dinosaur effects and both of The Polonia Brothers onscreen. One plays a drunk and it's hilarious that he always has booze in this bottle he's lugging around...even though they have been on the island for days. I am impressed with what they attempted to do with this one. They faked dinosaurs and a volcano which shows that these two have no fear in bringing their unique vision to the screen. Like I said, the weakest of the bunch, but give me a weak Polonia Brothers flick over some of the things I see infecting the local Blockbuster chain. I managed to snag this set for less than five bucks INCLUDING shipping from Amazon. Well worth the price and a great start for those who have yet to experience the bizarre charm of The Brothers Polonia
Posted by Douglas A. Waltz at 2:58 PM No comments: