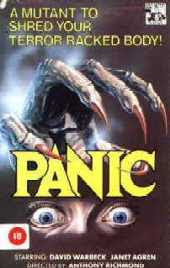 The box actually says that the flick was made in 1983, but I'm gonna go with the IMDB date instead. Especially since the flick was originally titled BAKTERION. So, we get this scientist type that has these experiments blow up in his face and he turns into a bloodthirsty monster and goes on a rampage slaughtering people. Enter Captain Kirk. No, not William Shatner. The character's actual name is Captain Kirk and he is played by none other than David Warbeck. Kirk is there to destroy the threat before time runs out. When time runs out they are gonna nuke the town to make sure that the contagion doesn't spread any farther than necessary.
Kind of odd since the creature comes into contact with quite a few people and they never get infected. Oh well, what ya gonna do?
So, with the time growing nearer and nearer, Kirk is forced to obtain a substance known as Necron gas. Bullets don't harm the monster so it is a last resort. The scientist type's assistant (played by blonde euro goddess, Janet Agren of EMERALD JUNGLE fame) thinks that she can cure the doctor. She even manages to communicate with the beast, but Kirk is having none of it. He manages to slaughter the monster and the bomb is not dropped. All is well for the survivors.
This isn't all that bad a flick. It's always good to see Ms. Agren, although she remained clothed throughout which was kind of a disappointment. warbeck is always good in the macho hero role and this time is no exception. The story just kind of moves from slaughter to slaughter with little rhyme or reason. Just enough time to eat up the running time and make sure that we get plenty of shots of the goopy monster and the crappy blood effects that he wreaks across the small village.
In the end it is a modest monster flick that serves it's purpose. To entertain
Posted by Douglas A. Waltz at 6:11 PM No comments: 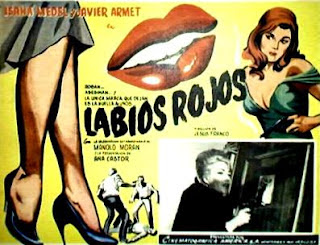 Yup, the kids have torn through the wrapping paper and are already showing signs of getting tired. That'll teach them to get up at six in the AM. Anyway, just spent an hour playing RESERVOIR DOGS for the Playstation 2 and it is a blast! Happy wishes of yuletide joy to all on this glorious day and if I had one wish, okay two wishes because the first wish really only has to do with world peace and such, but the second wish would be for someone besides myself to get a copy of LABIOS ROJOS (Pictured above) and subtitle it for the masses. Being the first of the series of films concerning the Red Lips Detective Agency I think that6 it is a pretty important flick. In the meantime I have decided to learn Spanish and get it done on my own.
I'll be back with more movies from my Chilling Box set in the near future.
Peace out!
Posted by Douglas A. Waltz at 7:27 AM No comments: 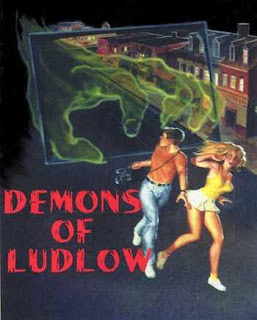 In the tiny little town of Ludlow, they are celebrating their bicentennial. To help commemorate the event the relative of the founding father of the town has sent a piano to the town as a gift. Unbeknownst to anyone in Ludlow, however is the fact that the piano is more than it seems. It houses the spirit of Ludlow and he has come back to the small town for revenge.
As I started watching this I saw the director's credit was for Bill Rebane. Bill Rebane? Why does that sound familiar? I dashed to the handy dandy internet and soon had my answer. Rana: The Legend of Shadow Lake also known as Croaked: Frog Monster from Hell, which is the version that I have. My God that movie was horrid! What chance did I have with this one.
Actually, it went pretty well. I love stuff that is shot in Smalltown, U.S.A. and this was shot in Wisconsin where every town is pretty damned small. The basic plot is what I mentioned above. The film has a creepy, grainy look to it that helps with some of the weirder aspects of the flick. I especially like when the townspeople are being attacked that every so often a weird looking, glowing hand would appear to help in the carnage. No explanation, but it was bizarre enough to be enjoyable.
Now, the one thing that does worry me is that this Chilling box set I have also has a film called THE ALPHA INCIDENT seems that Rebane directed that one as well. I could be in for some big trouble with this Rebane fella.
Posted by Douglas A. Waltz at 6:29 PM No comments: 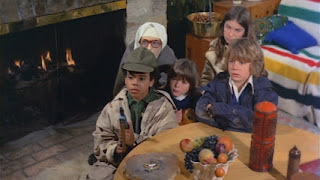 Man, are those kids creepy or what? Seems that they were on their way to a asylum for looney kids and the bus gets into an accident. The driver gets knocked out and there is the kids' opportunity to escape. There's a nearby house full of three couples and a handyman. The kids make a beeline for the place and they get a chance to whack their keeper before he spills the beans.
It isn't long before they start dispatching the people one by one. At first, the grown ups think that there's a killer on the loose. It's waaaay too late before they figure out the truth and by then, well the grown ups are screwed.
There are some interesting kills; a woman set on fire, death my swing that has a machete in the front of it, but my favorite would have to be when they drown the big titted bimbo and drop piranha in the bathtub while she struggles to survive. Very inventive.
Now, here's the weird part. The big tittied bimbo I mentioned, yeah her name is Carolyn Steller and she is Leif Garrett's mother. Also Dawn Lyn who you might remember better as Dodie on MY THREE SONS, is Leif's sister and the daughter of the aforementioned Carolyn Steller. Kind of a weird flick to involve the whole family in. Especially when Carolyn is thrashing in the tub buck naked and her own daughter is dumping live piranha on her. In defense of the piranha, they looked a lot like blue gills to me.
In true 70's exploitation schlock we get a downer, non ending, but I gotta admit. The murders were creative, the kids were creepy and probably the weirdest thing is that the only motivation that these kids had was that they were crazy. No radioactive sludge made them this way or being the offspring of aliens, these kids were just bug nut crazy.
This is another one from the Chilling 50 pack I got. This was a good one.
Posted by Douglas A. Waltz at 4:38 PM No comments: 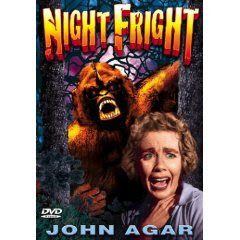 Not to be confused with FRIGHT NIGHT, this little gem comes like a blast from the past from the sixties. Unfortunately, see that really cool monster on the cover? Yeah, he ain't in it. As near as I can tell it's a rubber mask on a gorilla suit. And why can't I tell? Glad you asked.
It seems that when they were filming this they decided to opt out of using any extra lights. If God given light wasn't good enough they weren't going to use it. Unfortunately, there is a lot of this flick that takes place at night. Unless there's a close up and those are some of the most bizarre day for night shots I've seen short of an Ed Wood flick.
The movie concerns itself with a secret project from NASA called Noah's Ark. They shot a bunch of animals in a rocket into space. When it went beyond the moon something horrible happened. Seems there's something out there that mutated some of the creatures. Now the rocket has crashed to Earth and one of the creature's is on the loose killing kids at their make out place called, are you ready? Satan's Hollow! Yeah, kind of a dead giveaway that this wasn't the place to get some action. Local Sheriff John Agar chews up the scenery in his attempts to stop the creature before it kills again.
I wish the movie wasn't dull, but director Jim Sullivan edited MANOS, THE HANDS OF FATE for crying out loud! There are some good moments in the flick. The scenes in the little coffee shop are pretty retro and John Agar is always cool to watch. The scientist type who explains the premise to us because, yeah right, they ha the budget to show a rocket ship. Is classic old school sci fi scientist type. He has the drink in hand and pipe lit while looking at the impression they made of the monsters' footprint. Classic.
My favorite bit was a scene where the creature is out in the woods and the music swells all scary like and then the camera zooms in as we get a musical stinger. Unfortunately, the scene is so badly lit that all we get is a black screen! Hilarious. In the end, this is a fun little time waster at a little more than an hour. I got it for a bucks with a second feature called SISTERS OF DEATH. I'll have to watch that one next.
Posted by Douglas A. Waltz at 4:41 AM No comments: