Who doesn't? Well, if you are one of the followers of this blog then each week in August I will be giving away a prize package to one lucky follower. So, follow today and get a jump on the crowd. I promise there will be many goodies. Then, after the month is over I will draw one name from the winners and they will get a free copy of DIVINE EXPLOITATION:THE BOOK! When it is released in November.
Seeya in August. 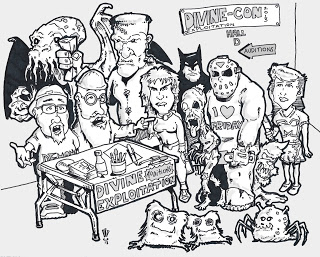 Week Four Winner is Dr. Penis
Posted by Douglas A. Waltz at 8:50 AM 2 comments:


So, we have a sorority house full of pretty girls, tough girls and nerdy girls. well, one nerdy girl. Cami (Meghan Heffern) who is studying insects and believes that they were originally much larger and much smarter. One, a scorpion, is so smart that it breaks into Sorority house leader Josi's (Rhonda Dent) room while she is having some bouncy bouncy fun time with the captain of the football team, Mitch (Travis Waters). In a tiff, Josi hoses down Cami's bugs with bug spray.
Unfortunately, these are not run of the mill bugs and it triggers a reaction that makes them large.
Large and hungry.
So it's a sorority house full of hot girls versus king size versions of a scorpion, stag beetle, spider and praying mantis. And that praying mantis is huge. Throw in a hot tub party and you have the perfect mix for big, big fun.
INSECTICIDAL reminds me of classic exploitation. We get naked girls, blood and crappy CGI. The classic stuff would have replaced the crappy CGI with crappy bug puppets, but you get the idea.
Meghan Heffern is like a Felicia Day clone. She exudes the hot, nerdy girl.

Her sister (in the film, not real life) Sophi (Samantha McLeod) is the epitome of stacked blonde who is really funny as well.

While it is sad that they both keep their clothes on, it is expected from Cami as the nice girl. Sophi was a little more disappointing, but she did kiss girls in the movie so, that's okay. There are plenty of boobs in the movie anyway. Well, sort of. It seems that the only girls disrobing were card carrying members of the Itty Bitty Titty Committee and that's not a bad thing, it's just, well the same. One girl in the hot tub really had no boobs. Really! She was built like a 12 year old...boy.
But, the gore flows and there is a lot of cliche, genre dialogue that is done pretty well. The bugs are crap, but they still manage to work.
Oh, did I mention the hot, Asian exchange student? Fumi (Vicku Huang)? They do manage to keep her clothed in a skimpy workout outfit, but spend an awful lot of time with her doing weapons training with sai. She was pretty cool.
In the end this is a quick little time waster with a really attractive cast of people. They guys don't mind being as nude as the ladies and Meghan Heffern should be in more stuff. She managed to channel her inner Felicia Day like a pro.
One last thing.
A lot of bugs get killed in this and the bug goo flies pretty fast and furious. It so looks like facial porn with out the actually...well, porn. Just strange is all. 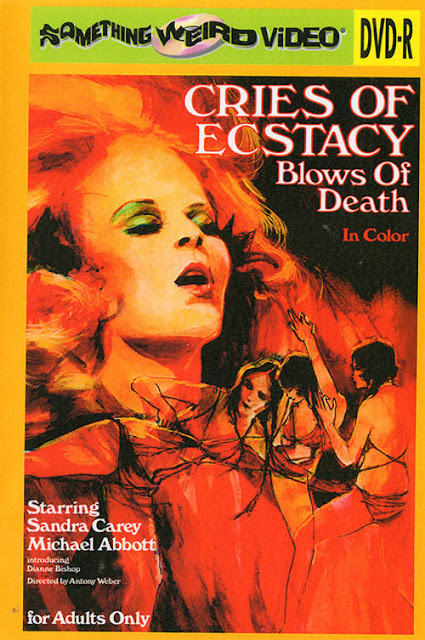 So, we finally cut the cable and bought a ROKU box. It is amazing and saves us so much money. Then I noticed that Something Weird Video has its own channel. The best 4.99 a month anyone could spend. I have barely scratched the surface of all the Grindhouse goodness, but when I saw this title I knew I would have to watch it.
It is the year 2062 and the Earth is a wasteland. Breathable air is almost gone and only by living in these huge plastic domes near a giant pipeline can the last of humanity continue to survive. Motorcycle gangs roam the countryside and the film opens with a pack of motorcycle riders raping a couple of girls. One of them ends up dead with her throat slit for the trouble.
The opening narration is by God himself.
There is much simulated sex to be had throughout the movie and in the final act another group of people arrive at the dome and one of them is Uschi Digard. Luckily the future seems to be clothing optional.
There is much over acting to be had with people who belong to the yell your lines school of acting. That makes it funny. 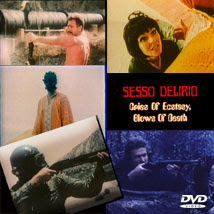 The one vehicle they have is this cool custom job that must be seen to be believed. The denizens of the future wear gasmasks that seem to supply them with air even though the eye holes have no glass in them.
The clear plastic domes are cool, and inflatable and using the stretch of the desert with a huge pipeline and a water runoff underneath gives the film a weird vibe that works really well.
The thing that took it up a notch is a little over half way through the film when one of the motorcycle gang brings his pregnant wife to the domes so their baby can be born and live. The man in charge explains that they all only have a few hours left and it would be a waste to give anyone hope with a new life. When the leader of the motorcycle gang rushes the leader another member of the leaders tribe flies into frame with an huge kick to the face. At that point we get some pretty well choreographed Kung Fu that seems so out of place, but makes it just that much more of a cool film.
Of the entire cast Ushci Digard is the most recognizable and gets to have dialogue which is always nice. The other two actresses that did more than this film were Sandy Carey (WHAM BAM THANK YOU SPACEMAN) and Neola Graef (CHROME AND HOT LEATHER)
Even the director and producer did nothing after this and it's kind of a shame. Mixing some intense soft core with a futuristic, bleak armageddon story with kung fu and motorcycles is always a good time. 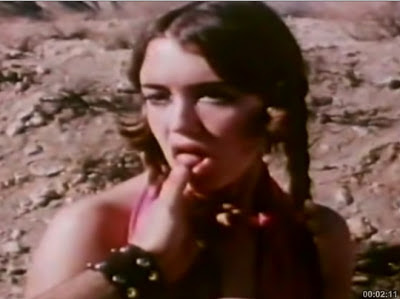 Thank you Something Weird Video for having your own ROKU channel.
Posted by Douglas A. Waltz at 7:41 AM No comments: