DOUBLE FEATURE AT THE WALTZ COMPOUND

Man, that should win for just the title. Plus, how can you not like something that starts with angry villagers battling a...caveman?!? Yup, it's internationally acclaimed actor, Boris Lugosi, as Ook, the neanderthal man. Of course the villagers kill the beast which gives Dr. Frankenstein all the more reason to bring him back to life. Also, he's got another monster named Goliath. Both of these monsters are pretty okay, but they don't get along and the villagers really don't like the idea of monsters in their neck of the woods.
This was the Something Weird Disc that had a couple of shorts with strippers dancing with guys in rubber Frankenstein masks. Pretty cool stuff. 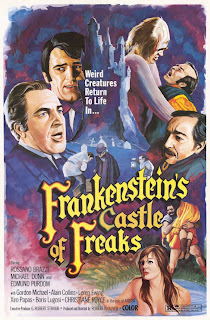 Man, does this Lila chick like acid or what? She trips the first time when she takes a john to her hovel after stripping and it makes her crazy. She stabs him in the back with a convenient screwdriver before finishing him off with a handy cleaver. Sure, this plot is thin as it gets, but it has that look of the time frame. The two detectives on the case, Steve Vincent as Sgt. Collins and James Brand as Lt. Ryan, have a great rapport and Stuart Lancaster is in it! Of course he is wasted in the part and gets whacked by Lila, but any Stuart Lancaster is better than no Stuart Lancaster.
I thought it left too much unresolved at the end. The cops shot the guy she was with because he had a gun and thought it was a set up. And, to be fair, he did shoot first. Then they just handcuff Lila and throw her in the back of the car and drive off.
I always like films that show the streets of yesteryear and this is no exception. They have to check all the go go clubs to find their killer and the storefronts are a blast from the past.
Best part of the movie;
Lt. Ryan shows Sgt. Collins an earring off the first victim and mentions that he had boots and a flowered shirt. Sgt. Collins doesn't miss a beat.
A hippy, huh?
Hilarious! 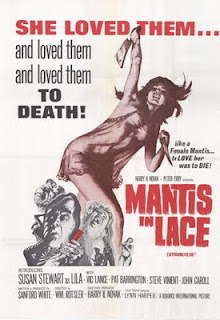 Posted by Douglas A. Waltz at 8:02 AM No comments: 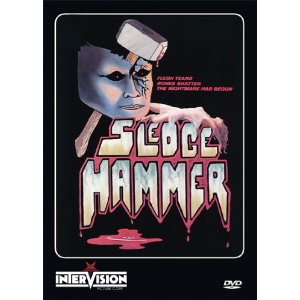 The 80's did many things. Slasher flicks being one of the most memorable. Add to that that consumer video camcorders were a reality and anybody could make a movie. Brothers Ted and David jumped on the bandwagon and gave us the bizarre fever dream known as SLEDGEHAMMER.
In a house where child brutality took place, a group of friends come to have a party. The focus of the brutality has become something unearthly and violent and now it has something to focus its rage on.
One of the first shot on video horror flicks, SLEDGEHAMMER is unique in that it doesn't bother to explain a lot of why things are going on. It gives you everything at face value and expects you to be ab adult and keep up. That makes it a little more than most shot on video fare.
This new release by Intervision and Severin Films is probably the best that this can look. Add to that two audio commentaries, two featurettes that look back on the film and an interview with director David Prior and you have what may be the best DVD release of the year.
It is a shame that Mr. Prior seems to care less about the proceedings. In the interview he looks like he's ready to bolt at any moment and in the commentary he just seems so tortured. It made it kind of funny for me. After Intervision's two Jess Franco releases, this is probably the feather in Intervision's cap.
The one odd thing for me in watching this and all the extras is, where is Ted Prior? According to his brother he did all his own stunts, did the gore FX, wrote music. He's the one that should have done the commentary and interview. Oh well.
But, I'm a little worried about that THINGS release. I remember that movie as being the worst.
Posted by Douglas A. Waltz at 1:35 PM No comments:

I have been crazy about this movie since I first saw the trailer. I knew I would have to watch it.

Yeah, then I watched it.
Sure, there are things I can say that I liked about the film. Some of Rainn Wilson's performance is spot on. Ellen Page does a great job at being completely nutzoid, but in the end...I really don't like this movie.

The trailer comes across as a guy who is fed up, lost his wife and at the end of his rope so he decides it's time to become a super hero. A vision with God touching his brain and showing him the cowl of The Crimson Bolt sort of nudges him in this direction.

His weapon of choice is a monkey wrench. Having done plumbing in my life, I have rapped my knuckles with a monkey wrench before. Yeah, that's gonna hurt. At first he tries to stop some minor crimes, but really it's about getting his wife back.
Kind of a selfish reason to become a super hero.
When Ellen Page as Bolty is added to the mix, things become dangerous. She is homicidal and delusional. A combo that really doesn't work if you want to be a good guy.

Now for the one thing that ruined the movie for me. And yes, as much as I despise spoilers, this is a huge one. If you don't want to read it I suggest you leave now, go watch the movie for yourself and come back later.
You have been warned. 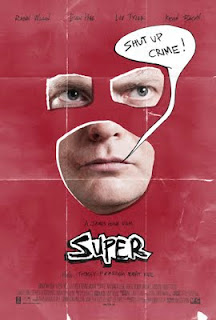 Remember, I said there would be a spoiler. You should leave now if you plan on seeing this thing. It will ruin the movie for you.
Last warning.
Okay, here goes. They kill Bolty. Ellen Page gets half her face taken off by gunfire. Why? No Idea. Is it supposed to give Crimson Bolt the drive to storm the house and take his wife back? Well, since after a short time she leaves him for a better, more productive life, that can't be it. I think it was for nothing more than shock value and that is a bad reason. I think her surviving would have made for a better film and given Rainn Wilson's character more than what he ended up with which was a rabbit that he got from the pet shop.
In the end this is not a super hero film. Kick Ass was a super hero film. This was just some psychotic episode with a stupid ending. I'm not even going to bother with the incredibly misleading trailer.
Posted by Douglas A. Waltz at 1:01 PM No comments: 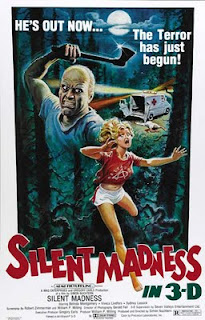 What we have here is a slasher flick where the sorority girls are going home for the holidays, but a few of them stay behind. Then Belinda Montgomery, better known as Doogie Howser's mom, plays Dr. Gilmore and she believes that something fishy is going on at the insane asylum. Seems they were supposed to release John Howard, a slightly off, well meaning looney. Yeah, the released Howard Johns instead and the last time he was out he slaughtered a bunch of girls from, wait for it, yeah that sorority I mentioned.
And how did this mute, wide eyed psychotic get released anyway?
The hospital tried to cover it up saying Johns is dead, but it doesn't stop the body count from growing.
I don't know. It does cover all the bases; blood, boobs and well, boobs. Belinda Montgomery seems out of place here, but Viveca Lindfors shines as the looney house mother. It just seems so, I don't know, thin. I realize that there isn't usually a lot of character development in this kind of thing but it should have been better.
It was in 3-D for crying out loud!
I'm leaving you with the trailer. Judge for yourself.

Posted by Douglas A. Waltz at 1:40 PM No comments: