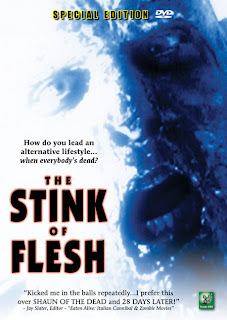 I discovered the other day that if you don't pay your Netflix bill you can still watch movies with their watch now option. I saw this little ditty on the list of available flicks and decided to give it a go. Now, when I watch these flicks it's not the best conditions. I'm wearing headphones and using my computer monitor and sitting upright in a chair. Not my favorite movie watching position.
THE STINK OF FLESH made me forget all of these discomforts...almost.
STINK OF FLESH gives us a world after zombies attack. Our main character is Matool, played to perfection by Kurly Tlapoyawa. A mean Mexican with padded fists for pummeling zombies and a huge hammer and these two foot nails that he uses to drive into zombie foreheads. Pretty effective way of killing a zombie if you don't mind getting uncomfortably close.
Anyway, Matool saves a young thing and runs for cover where he runs into an old man and two young kids. Things go bad and the old man, the young girl and one of the youngsters don't make it out.
Thankfully, Nathan is driving around looking for some strange dick for his wife Dexy. Seems that even in a apocalyptic world some people gotta lead an alternative lifestyle. Nathan is no saint either. He's got a fine, naked zombie chained up in the toolshed for a little necro romance from time to time.
Throw in a trio of army guys, one who is bit up pretty bad, Dexy's sister Sassy who has a twin joined on her stomach, just a ugly little face really and the fact that there is a new breed of hyper zombies who move fast and think faster and you have got one strange little movie.
Add a wicked soundtrack and you have a little cult flick in the making.
...except for the ending.
Yeah, it amazes me how I can be so involved in a flick that when, suddenly, the closing credits start to roll that I think that I must have hit a chapter stop or something. No such luck. The movie wasn't over and it ended anyway.
This is a two year old flick so you've either seen it or you haven't, but I'll put up a spoiler warning anyway.


Okay, Matool and one of the army guys are fighting over who gets to stay and keep Dexy for their very own. The other two army guys die as does Sassy who gets shot accidentally and Nathan gets chomped by his zombie girlfriend.
remember I said earlier that only one of the youngsters gets chomped in the beginning? Well, the other kid never talks and wanders around the house and looks out the windows. And somehow manages to released Nathan's zombie girlfriend from her shackles without getting bit???? Something is missing here. Anyway, Dexy and the boy are in the house unaware that Nathan is zombie chow and Matool and the army dude are fighting while being surrounded by zombies and when they see how many of them there are they run for the house.

Dude, you made a wicked little independent flick here. The characters are well fleshed out. The acting ain't bad and the effects work. It's more original than a lot of zombie flicks. Why didn't you end your movie? Really, this was the deal breaker for me. I really can't recommend this movie based solely on this fucked up answer of an ending.
Go watch something else.
Posted by Douglas A. Waltz at 6:04 PM 1 comment:

Howdy all! My new chapbook, ATTACK OF THE CREATURES FROM THE UNKNOWN is out! A full color, wrap around cover by the one and only Linc Polderman. Signed and numbered limited to 100 copies. Get yours now. makes for an excellent Christmas gift for those on the hard to buy for list. Only 10 dollars postage paid! Make payments to Paypal at dwaltzwriter@yahoo.com or send me cash, check, money order or something really cool in trade to;
Douglas Waltz
1915 Douglas Ave.
Kalamazoo MI 49007
Anyone ordering it gets a free copy of the newest issue of the print version of this blog. That's right! Another issue of Divine Exploitation is coming for Christmas! If you just want the issue of Divine send along two dollars postage paid for that. It is also available for trade. A wicked cover by Stew Miller featuring the insane crew over at Low Budget Pictures.This is one cool issue of the zine that has been around since 1988.
Now, I know what you're thinking; What is this whole ATTACK OF THE CREATURES FROM THE UNKNOWN about? Well, last year I did a chapbook (The first in a series of five) entitled BRUCE LEE VS. ILSA, SHEWOLF OF THE S.S. IN THE DEVIL'S TRIANGLE(still on sale I might add for a measly seven bucks). My buddy and cover artist Linc Polderman came up with the idea of doing a series of chapbooks. This story originally appeared in the anthology, PARASITIC SANDS and it seemed like the perfect story for chapbook treatment. It's basically a riff on the whole B Movie attack of monsters kind of thing on the shore of Lake Michigan. It's meant to be taken that way and any attempt at logic will show huge plot holes in the narrative. If you're a Roger Corman or Al Adamson fan then you will love this story.
And finally, what's up next for the chapbook series? The title says it all; THE PENULTIMATE MACHINATIONS OF FU MANCHU will be out next year and it looks to be the craziest of the series so far.
So order stuff now and frequently. As a bonus, check out the ultra cool banner from the cover of ATTACK OF THE CREATURES FROM THE UNKNOWN that Linc Polderman had made for me. Sweet! 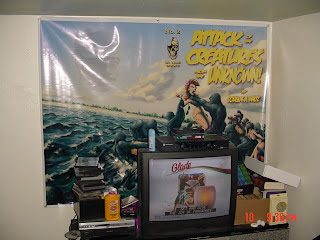 AN OPEN LETTER TO SEVERIN FILMS AND BLUE UNDERGROUND 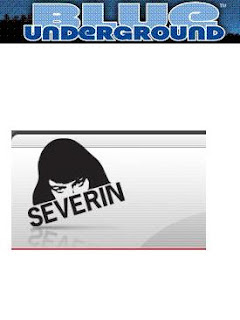 Two of the finest companies releasing long lost flicks on the DVD market today would have to be Severin Films(www.severin-films.com) and Blue Underground(www.blue-underground.com). Being a huge fan of Jess Franco they release more and more of his product. Severin gave us the wonderful one two punch of MACUMBA SEXUAL and MANSION OF THE LIVING DEAD. Not to rest on their laurels they put in another one two performance with THE SEXUAL STORY OF O AND THE INCOFESSABLE ORGIES OF EMMANUELLE. This is Franco at his sleazy best. Blue Underground has given us fantastic presentations of Franco films like VENUS IN FURS, THE BLOODY JUDGE and THE GIRL FROM RIO.
Now, here is my one and only complaint;
It is obvious that these discs are being manufactured with people like myself in mind. Dyed in the wool, genuine Franco fans. Really, there are those who love Franco and those who hate Franco. I doubt that these are being produced with the Franco haters in the crowd. That being said, we need longer bonus materials on these discs! You're already there. You have Franco discussing his films and he loves to talk so what is the problem? Really each of the aforementioned features needed at minimum an hour to cover what we were watching. And we know that Lina Romay is there constantly at his side so, get her in on it as well. OF all of them MACUMBA SEXUAL was one of the more satisfying looks behind the scenes, but it was too short!
Pack the discs! Make them a double disc if you have to. We don't care and we'll pay the money for them. Previous releases should prove that.
So, Severin Films, Blue Underground, thank you for what you do, but take this heartfelt plea into consideration with your, hopefully, upcoming releases of more gems from the Franco filmography.
Posted by Douglas A. Waltz at 8:30 AM 1 comment:

So, recently we upped our cable through Charter because I wanted BBC America. Along with it we got a plethora of channels that I will never watch, but this one caught my eye. Their daytime programming is pretty much disposable claptrap that I will never watch, but primetime, ah that's different.
I have caught episodes of TIME TUNNEL, LAND OF THE GIANTS, BATMAN, GREEN HORNET and MISSION IMPOSSIBLE. They are shown in their entirety and they are as much fun as I remmeber seeing them the first time. Now, those huge box sets of these shows seem a little less important. Tonight is RAT PATROL, COMBAT! and TWELVE O'CLOCK HIGH. I can hardly wait!
Posted by Douglas A. Waltz at 11:12 AM No comments: 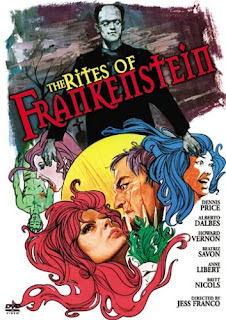 have you ever had one of those movies that you know for a fact that you have seen and then discover that you haven't? Yup, happened to me and it was THE EROTIC RITES OF FRANKENSTEIN. Jess Franco's wild and woolly look at the Frankenstein legend. In this case the monster is painted silver. Why? No idea, but it makes for a bizarre visual. I was truly excited when, in the opening credits, it showed Jess Franco playing his character Morpho. I had never seen him play this part that is so much of his little world. Then he gets killed in the beginning of the film! Only Franco would tease us like this.
Lina Romay plays a gypsy girl and while it has nothing to really do with the film she is breathtakingly gorgeous in this part. She was made to play a dusky gypsy girl. Anne LIbert as the blind bird woman with the bizarre screeching radar that she uses is magnificent to watch. A voluptuous, dark haired beauty that adds to any Franco film. Howard Vernon as Cagliostro chews up the scenery and makes for a magnificent villain.
I have seen a lot of Franco flicks and this one takes the cake. It has it's own sense of logic, we get to see what composer Daniel White looks like, it's just a fun film all around. I didn't like that all the nudity was consigned to alternate scenes in a separate part of the DVD, but it was still nice to finally see a flick that I thought I had watched and never did.
Posted by Douglas A. Waltz at 5:00 AM No comments: