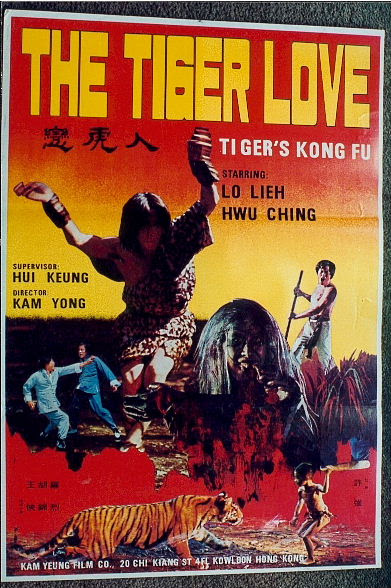 I have been getting deeper and deeper into the 200 film set Drive In Cult Classics Collection. I am going to have to come up with some short hand for that damned thing. from now on I think we'll refer to it as DRIVE-IN 200. Sound good? Good!
So, TIGER'S LOVE. We have a couple in love who have to run away because their families are feuding. They are stopped by the grandfather of the girl who tells her that she must marry her cousin. (um, ewwwww!) She is already pregnant by the man she loves so she refuses. The grandfather's cronies beat the man to death and she throws herself from the cliff.
Instead of plummeting to her death her fall is stopped by a tree branch. Under the tree branch is a tiger who, when she spots the beast, makes her piss herself and it lands on the tiger. There is an old legend that if a woman kisses a tiger they are her slave. She thinks the piss must have the same effect on the tiger. Regardless, the tiger stays with her as she gives birth and helps raise her son. He even teaches the boy some tiger kung fu in the process.
The boy is curious and goers to a nearby village. He discovers that his father is alive. He also discovers a beautiful girl who is from the warring family?
Yeah, it seems that we are fated to go through this whole story again with the ancestors of the original two from the beginning of the movie. 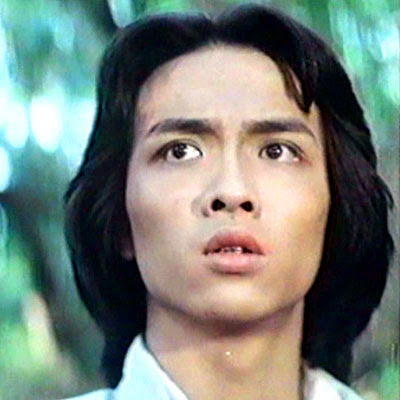 It is pretty much a typical kung fu flick. The hits all sound like a broomstick on a plastic couch. The dubbing tries to match mouth movement which is always awkward. I've seen hundreds of these and nothing could prepare me for the end.
The young boy's mother is killed. This allows the tiger to kill it's 100th human victim. Now it can change its shape and turn into a psychotic old woman with huge teeth and claws who proceeds to kill everyone from the warring family, holding them responsible for the death of her friend.
That little jog to the left straight into the head scratching valley of what did they just do? MAde Tiger Love more than just your typical kung fu flick.
It made it awesome.

One worry is the tiger used in the film. There's a scene where the young boy is playing with the tiger and it comes at him and knocks him down. They freeze frame the shot and the boy has a look of pure terror. We never see him again so I just assume the tiger ate the kid. I'm also pretty sure that tiger messed up some other people in the production, but have no proof.
Still, a pretty epic kung fu flick.
Posted by Douglas A. Waltz at 9:50 AM No comments: 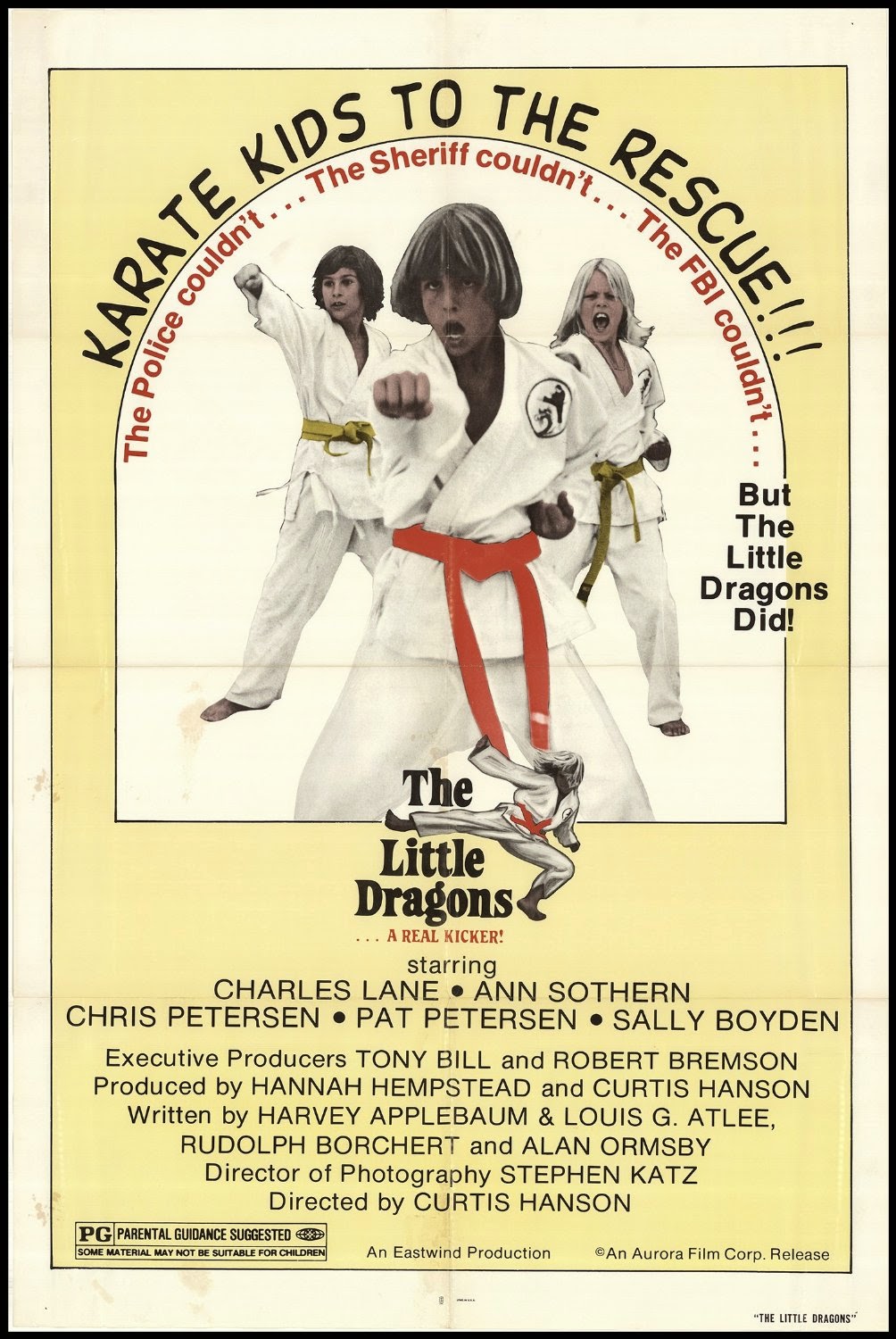 As part of my 200 movie set Drive In Cult Cinema Collection, this may be one of the better, more interesting films in the set. I included the cinematographer in the credits because he has done things like The Blues Brothers. I know when you see four writers you wince a little, but two of them only have this film as a credit and the third guy wrote a little televsion. I'm guessing they hired Ormsby to fix the script.
So, we have a pair of brothers at their Karate dojo. The instructor Pat E. Johnson was a referee in all three Karate Kid movies. They leave after practice to go fishing with their grandpa who they only call J.J. (Charles Lane). He has bought an old klunker of an RV and they are on their way camping. They get passed by a new, sleek RV that houses the Forbinger family Dad (Rick Lenz), Mom (Sharon Clark) and their daughter, Carol  (Sally Boyden). 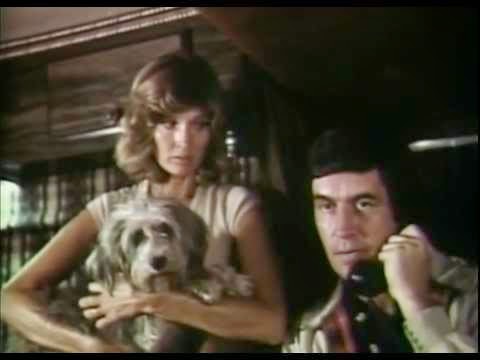 Unfortunately, the Forbingers get lost and then get their RV stuck. Luckily, help comes in the form of a pair of hill billy brothers, Yancey (Joe Spinell) and Carl (John Chandler) who get them out of their predicament and send them on their way. Anyone who has seen Joe SPinell in a movie knows this encounter will just lead to something bad. And since I remember John Chandler as the baddie from Adventures in Babysitting we know it can't be good. They report back to their momma, Angel (Ann Sothern) who decides they should rob the Forbingers of all their fancy RV stuff. 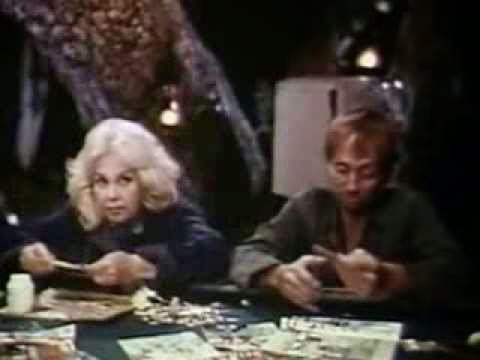 One mishap follows another and the boys kidnap young Carol and her dog, Rufus. They decide it's a way to make some serious cash quick.
Soon, the FBI are involved, the karate boys get help from a motorcycle gang led by Donnie Williams of Battle Creek Brawl fame. They enlist the other kids from the dojo and soon it's the karate kids versus the kidnappers.
This was a fun flick. They didn't go the silly route like a lot of films would and they had no problem putting a large amount of children in peril. When the dojo gets rides from the motorcycle gang and they are all tooling down the road it's pretty obvious they didn't have any stunt doubles. 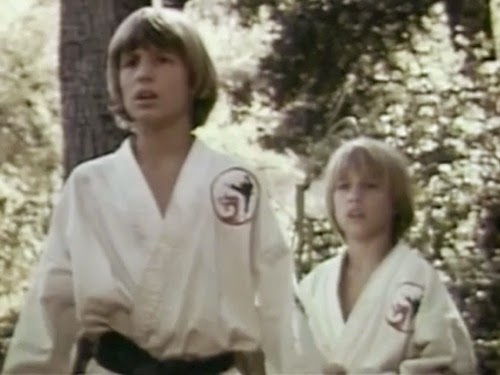 I was amazed that they got as the karate master, Bong Soo Han who is considered the master of Hapkido and taught Billy Jack to kick ass. This movie is full of little surprises like that. The whole movie is pointing at the screen and saying, 'Hey! I know that guy!'. I love movies like that.
Kind of a shame they don't make movies that don't really fit any kind of predetermined mold any more.
Karate Kids U.S.A. kicks ass!

Here is a link to enjoy the entire film if you like;