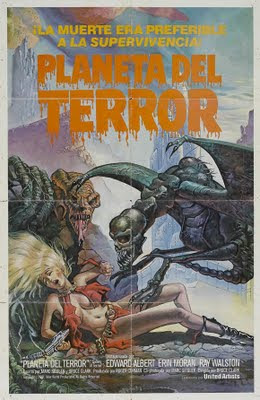 Okay before anyone starts groaning. I want you to look at this film with fresh eyes. I want you to see it in your mind like I saw it originally. In a theater with no idea of what was going to appear on the screen. It was 1981 so that put me at the ripe old age of eighteen. I had already seen things like Alien and its ilk so, what was this going to offer me? Simply the trippiest, fly by the seat of your pants, sci fi horror film that has no equal.
Don't believe me?
Fine, let's start with a little list, shall we?
Edward Albert
Ray Walston
Erin Moran
Robert Englund
Zalman King
Grace Zabriskie
Roger Corman
William Stout
Bill Paxton
James Cameron

Did you see those names? Sure, some are better than the rest and Bill Paxton actually worked behind the camera for this one, but look at the list! This is epic B-Movie making at it's finest. 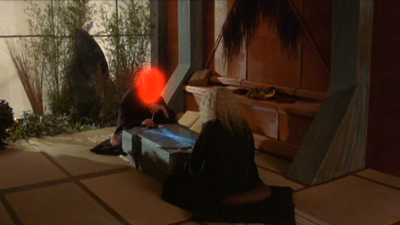 Let's do a quick plot rundown, shall we? Seems that a ship landed on this spooky planet and this one guy is running for his life. Yeah, he don;t make it.
We fast forward to a guy called The Master who has a glow in the dark head. Seems this planet is something that he has been searching for all his life. Now, it's time to assemble a team to get to the new planet. The Master tells them it's to try and rescue any survivors from the original mission, but we know better. 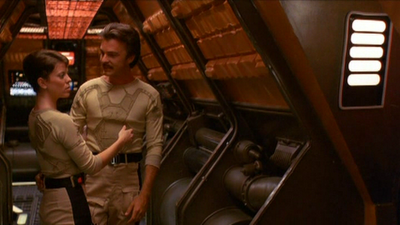 This is a team of misfits. People with sever emotional baggage that they wear proudly on their sleeves. With the aid of hyper drive they are at the planet in no time and something is using their own fears to prey upon them and start the slaughter. But what is it?
GALAXY OF TERROR deserves so much more than it gets. At a brief 81 minutes, this film flies by. There are no long scenes of exposition. Things are inferred and not spoon fed to you. This requires you to think, use your brain to figure out what is going on. Sure, some of it is obvious, but not all of it. The characters are given to us as if we already are acquainted with them. The movie takes off like a shot and never slows down until the credits roll. 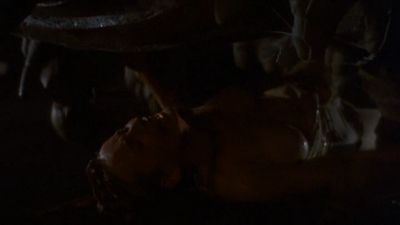 Sure, Erin Moran's acting is horrible and she only seems capable of one expression throughout the film, but it is fun to watch Joanie from Happy Days get slaughtered so there's that. Edward Albert reminds us of what a great character actor he was and that we lost someone very special waaay too soon in his career. Robert Englund actually acts without mugging Freddy style for the camera. A welcome performance. The special effects team gives us a huge, mystical pyramid and a ravaged planet scape that looks so damn good. You can see where James Cameron stole some of this for ALIENS. 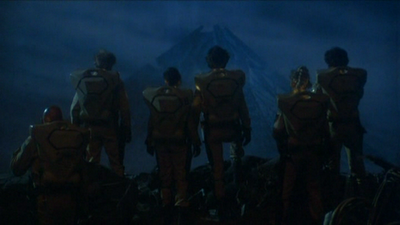 And then there's the giant worm rape scene. This was just bizarre. Probably one of the oddest scenes in Cinema history. Thankfully a statuesque blond covered in clear slime is pretty good to look at. It's a shame the giant worm thingie killed her when it was done.
GALAXY OF TERROR is a film worth revisiting with fresh eyes. Or to discover it for the first time as a film that rose above its budgetary restrictions and gave us something unique.
Posted by Douglas A. Waltz at 5:25 PM No comments:

Russell T. Davies is a hack! 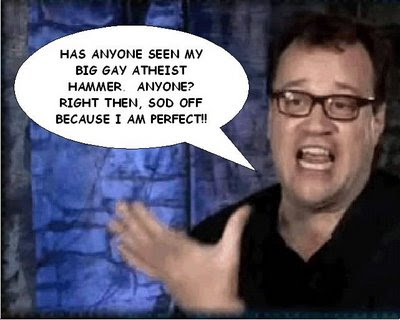 I'll make this brief. And, yes, there are spoilers. The new mini series of Torchwood has decided to kill off Ianto, one of the main characters of the series. Why? See the title for a quick explanation.
Lately, I have been reading a lot about Mr. Davies in the news and there are many interviews with him. He comes across as a pompous ass. Look, sir, you're just writing television. It's not like you have invented the wheel. And, if you're such a good writer then why does Stephen Moffat win all the awards for the episodes of Doctor Who that he has written. Thank God that he will be taking over the further adventures of Doctor Who. That way Davies can stop clubbing us over the head with his personal life.
Yes, we get it. You're gay and don't believe in God. We got that pretty much right away, but there you are with your Gay Atheist club hammering away at us week after week.
Having been a big fan of the show in it's previous incarnation, Doctor Who not Torchwood, I have to say that I prefer that one. It was about the adventure not the preachy. It made a statement about the human condition by including all humans, not just who Davies wants us to think about.
Moffat does a good job of getting that idea across. Davies does not.
And now he has ruined Torchwood. Good for you Jackass.
And to all the fans of the show who are more upset about this than I am, Davies could care less. This is his little pet project and I'm pretty sure his agenda from the start. He only did Doctor Who so he could get Torchwood made. It's been planned for a while now and when he writes himself into a dramatic corner he goes for the easy out. Kill a major character. Ohhhhh! Never saw that one coming ya twit.
I, for one, will not be bothering with the finale of the mini series of Torchwood. Don't need to waste my time.
That's it for me. I'm out.
Posted by Douglas A. Waltz at 4:23 AM 1 comment:

WHERE DIVINE IS AT

I have been scrambling like an idiot doing this and that, but I have some thing in the pipe and other goings on that I would like to address here.
First, you must go to see the Breastford City Limits blog that my new buddy Louis Fowler and I are doing. It is quite a lot of fun to have a site that only deals with things from Alternative Cinema. And that's Alternative Cinema the company, not the concept.
I just watched the J.R. Bookwalter film Robot Ninja and I have been blown away by this flick! More in a review to follow very soon.
I have also become obsessed with The Formaldehyde Man from the Nick Zedd flick Geek Maggot Bingo. Enough that I have done a new mini comic with him versus Fu-Manchu. I have made stickers and my buddy Christopher is working on an inaction figure of the beast for me.
I am also still in the working phase of my book on film maker Michael Legge. The more I write, the more I want to write.
And finally, I am in the middle of a series of interviews with film maker Tony Marsiglia.
Just thought you might all want to know what was going on. I felt like I was ignoring my fans.
In the meantime, here is a picture of the amazing, one of a kind, Formaldehyde Man. Enjoy! 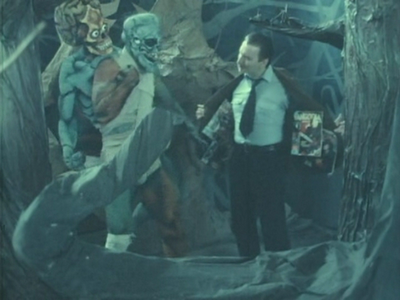 And yes, that is Bob Martin, former editor of Fangoria in the shot with him.
Posted by Douglas A. Waltz at 5:19 AM No comments: 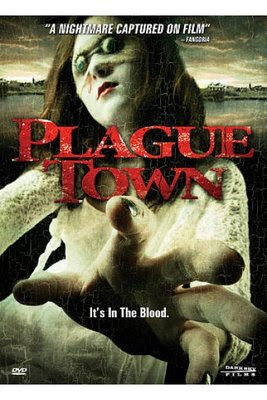 The story might sound familiar; A dysfunctional family trying to cure the dysfunction with a bonding trip back to their roots in Ireland. Then they miss the bus back to civilization and are stuck in alien country. And to make matters worse, this ain't just a quaint little Irish town.
It has secrets to hide. Deadly, vicious secrets.
PLAGUE TOWN gives me hope for the future of good old fashioned horror movies. This is what the 80's were like before everything got caught up in remake Hell. We got Jason first. And Freddy. And Cropsy. And weird things like John Carpenter's The Thing. It has that frisson of pure evil that inundates films like Messiah Of Evil.
In other words, this might be the creepiest thing I have seen in a very, very long time.
That's all you get from me. Any more would ruin it for you. Find the film, watch the film and thank me later.

Posted by Douglas A. Waltz at 5:05 AM No comments: 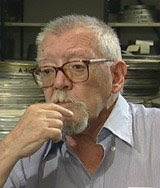 Apparently, Jess Franco will be in Texas at FantasticFest at the end of September/beginning of October. I'm not sure of the specific date as of yet, but more information will appear as I learn it.
I once saw Franco in Chicago many, many moons ago. It was one of the true highlights in my fan boy life and would love to repeat it. That's why, if you look to your right you will see that the PayPal button has reared it's ugly head.
How much will I need to get there? Not sure. I will go the cheapest way possible so I'm still working on that.
Hopefully I will have all my ducks in a row come next week and can give an exact amount and keep track of how it develops.
Thank you all for my ramblings.
Once again, a picture of a pretty girl; 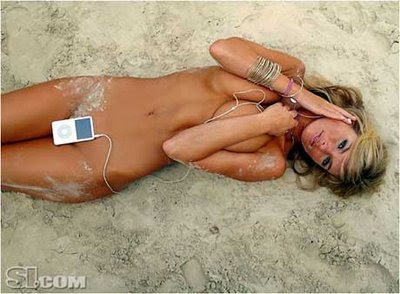 Posted by Douglas A. Waltz at 5:19 AM No comments: