We all know the story of Snow White. Because of the Disney film it is ingrained into the human consciousness. This is a German production that goes live action. The dwarves are played by children. I love that the evil queen is not really that good looking. Prince Charming with his page boy cut is hilarious. The hunter doesn't even try to cover up that he hasn't killed Snow White and gets thrown in the dungeon. Because of the Disney norm that we all have it's interesting to see a different take. The queen takes three tries to kill Snow White. The prince didn't have a magic kiss. When the dwarves drop the glass coffin they knock the chunk of apple from her throat and she's fine. I admit that is weird because she's been dead for a few days. It's a fairy tale so, what do you want.
A lot of these kiddie movies tend to have a low rent feel to them, but this one is so lush. It deserves a new release and a cleaned up print. In it's original lush color I'll bet it was just beautiful. The kids as dwarves are not as annoying as you would think. They do a great job.
These kiddie films are just a great thing that you can get from Something Weird Video . I recommend all of them. They are either sweet like this one or just some of the weirdest things you have ever seen. Great stuff.
Posted by Douglas A. Waltz at 9:15 AM No comments: 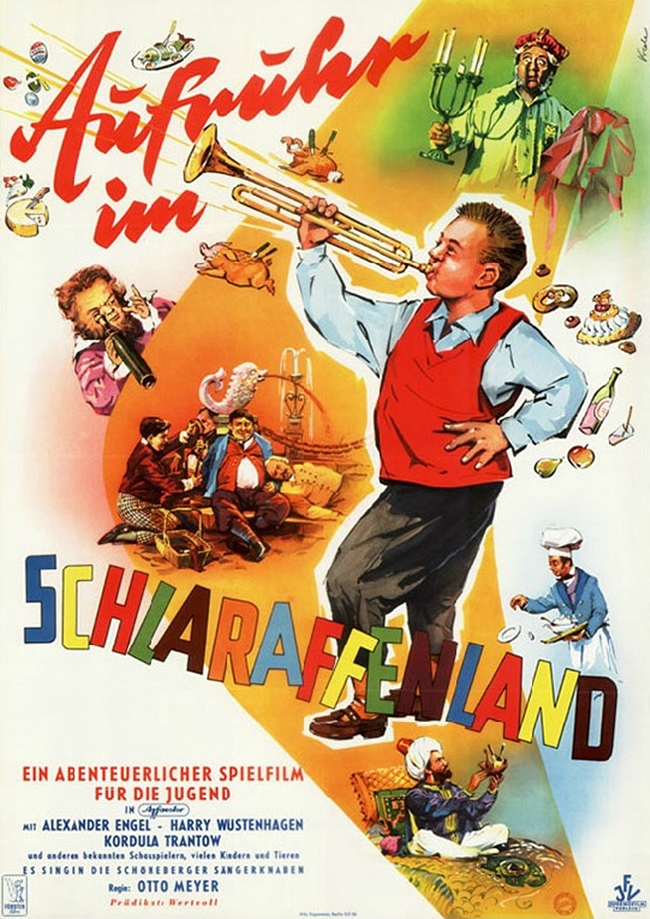 So, we have a poor little kingdom with a kind king who invites a fairy in from the rain and cold and shares the last  of his food with her. To repay his kindness she gives him a special button that when he rubs it wonderful food appears. Anything he can imagine. He shares this good fortune with the entire village and soon everyone is overfed and lethargic. No one works and the kingdom is sealed off by a mountain of milk rice. The good doctor is outside the village so he is unable to get in to help. A neighboring kingdom that seems to be Middle Eastern in origin originally turned down the good kings offer to marry his young daughter, but when he sees the transformation of the kingdom he decides he wants it for himself.
This is a fun, silly movie and I had enjoyed it quite a bit. I can see watching this one more than once. Luckily there is only one musical number because they didn't get anyone in the dubbed version of the film that could actually sing.
Another K. Gordon Murray imported classic brought to you by Something Weird Video.
Posted by Douglas A. Waltz at 7:39 AM No comments:

So, Gorilla is a lot of things. It's the first Swedish film in color. The shot it in the Belgian Congo and it deals with a gorilla that has turned into a man killer. Apparently, the gorilla's mate died and it went off the deep end so, they go get the great white hunter to kill the gorilla.
A lot of this feels like a documentary and it's obvious that none of the villagers are actors of any kind. They aren't all that nice to the pygmies either and consider them to be a lower life form. But the elephant attack on the village is obviously staged.
And the ending is sudden and horrific. I realize that it's a pretty old movie so, spoilers are what they are. At the end the great white hunter finds the gorilla and someone, probably not the actor, shoots it out of the tree. Then we see the great white hunter check the corpse and yeah, they killed a gorilla in this movie. Just kind of jarred me out of the picture.
It succeeds in showing what mankind was like decades ago and I'm glad we're not like that anymore. Well, except for the assholes who still hunt gorillas.
This one, like all of the recent ones can be found at Something Weird Video
Posted by Douglas A. Waltz at 5:57 PM No comments: So, this fella that owns a strip club wants to get into the Japanese heavy machinery business because, hey who doesn't? Now, instead of going by the normal industrious route he figures if he kidnaps the CEO of the company's young daughter and hold her for ransom. The ransom being made a partner in the company. How long would you keep a partner whose initial move is to kidnap your daughter? Anyway, the business man doesn't waste any time in hiring Busty Brown who lives up to her name and reputation. Soon, she is in the club showing off her ample assets until she can get close to the daughter, whisk her away on horseback (???) and when they bad gets too close she hits him with her knock out spray, no not her boobs, actual knock out spray. Then they stuff him in the trunk of his car and push it off a cliff. Again (???).
Does it feel like I've given everything away? Yeah, not really. There is so much going on in this movie. Did I mention that for the darker scenes they had one good light and no real idea of where to place it so we could see important things like the actor's faces?
Busty herself is very nice to look at as are all the lovely naked ladies that grace the film. The bad guy has a huge nose and one of his henchmen is probably the most stilted actor on the planet. They even throw in a little kung fu for good measure.
My favorite part would have to be the German Shepherd that looks like he just wandered in the movie
All in all The Adventures of Busty Brown was a fun flick. Shame it never became a series.
And, as always this and many more fantastic films can be found at Something Weird Video.
Posted by Douglas A. Waltz at 9:56 AM No comments: 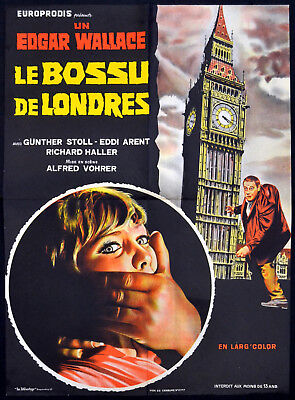 A young lady has arrived from the United States to receive her inheritance. But the lawyer's secretary records everything and calls someone to kidnap the girl so they can steal her inheritance. They take her to a home for wayward girls that is a front for a laundry that is also a front for a gambling prostitution ring.
This one has so much fun going on. We have the hunchback who does the dirty work for the people in charge of the laundry/prostitution ring. The organ that the matron plays during choir practice is rigged with alarms that are scattered throughout the house. We have secret one way mirrors, secret doors behind sliding mirrors. There are double crosses and weird reveals that I never saw coming. In other words; another great flick from Something Weird Video
Posted by Douglas A. Waltz at 7:02 AM No comments: