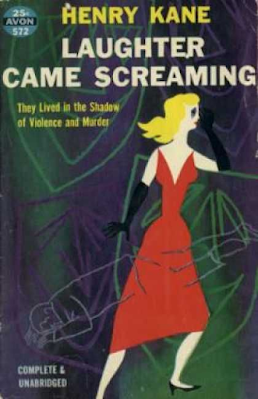 So, with my new warehouse position I do not have as much time to watch movies. I will still watch movies and you will see reviews here when that happens. But, for now, I take books with me to work. I get two half hour breaks so I get a lot of reading done.
This is the first book I finished and I've only been at the new job four days.
And this was a weird one to start. We have James Barr who has money and a beautiful wife and a foster daughter, full grown that he has the hots for.
Pretty basic.
But, see this book is divided into three separate books. The middle is a huge flash back for James with another flashback shoe horned in for the man his daughter is madly in love with. The middle section goes over one of the most detailed robbery plans I have ever read.
But, see here's the problem;
James is freaking nuts. He has no idea that he is a true psychopath.
And did I mention that his wife is a strongwoman from the circus?
Yeah, that figure sin later.
I did really like the rapid fire dialogue that takes place throughout the book. I saw the inevitable end coming and when it does it is quick and painful.
All, in all this was a great book.
Posted by Douglas A. Waltz at 8:45 PM No comments: 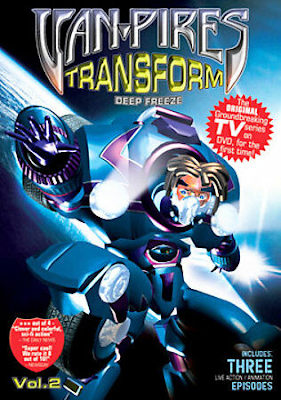 So, there I am when what you see up there appeared at 2nd Chance in Kalamazoo. It's a store that sells second hand movies, TV Shows, video games and systems and music. It's a really big store and I love to go through their 99 cent racks.
Then I saw this.
I flipped the case over and was astonished.
It said;
Van-Pires centers on a group of human teenagers who protect and defend the world from evil anthropomorphic junkyard vans and vehicles known as the "Van-Pires" by transforming into robotic anthropomorphic cars, calling themselves the "Motor-Vaters"
Oh you know I had to watch this.
And it is a combination of computer animation straight from the late 90s and live action when the Motor Vators are letting their mechanical forms sleep during the day.
Did I mention that the head bad guy is named Tracula?
Oh yeah, this is just a fine example of what may be one of the weirdest television programs I have ever seen.
The acting is dreadful, the writing is worse and it had a 13 episode run.
Did I mention John Entwistle of The Who wrote the soundtrack for this? Yeah, he wrote a ton of songs for this. Apparently he really liked the show.
My DVD only had three of the episodes, but luckily YouTube has them all so I won't have to search for them.
Added weirdness would be the kids mentor Van He'll Sing (Not a typo) who says he plays himself. No one can seem to find out who this guy was.
Did I mention that Tracula is voiced by Jonathan Davis? Frontman for KORN? Yeah, this is so freaking weird.
Go watch it. Each episode is only 23 minutes long and there are only thirteen of them. Most of you have binged longer for less.
Posted by Douglas A. Waltz at 4:51 PM No comments: 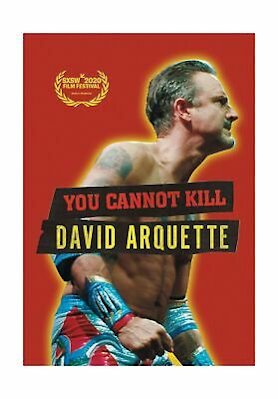 Many moons ago when all of my children were small and we lived in a shitty trailer in a sketchy trailer park, we had a magical VCR. The reason I say that is it would play the tape, rewind the tape and then start playing it again.

At The Waltz household we had a few tapes that we just let run for days, weeks at a time. Because of that there are movies that my whole family can quote word for word.

One of those is Ready To Rumble. I consider it one of the better wrestling movies in existence. David Arquette and Scott Caan are perfect together and it's my favorite Oliver Platt role.

This leads us to a new documentary concerning David Arquette. In 2000 in conjunction with the film he won the WCW title belt and wrestling fans loathe him to this day for it.

Before we dig into the movie I want to voice my opinion that the only person who should fell responsible for this is Eric Bischoff. It was his idea and he presented it to a 26 year old wrestling fan who has a manic personality to begin with.

David Arquette loves wrestling. He shouldn't feel bad at all about some shitty promoter trying to make a buck. And since Arquette gave every penny he made from WCW to the families of Owen Hart, Brian Pillman, who both passed away, Hart from an in ring accident and Pillman from an undiagnosed heart condition. He also gave a portion to Darren Drozdov who after a ring accident became a quadriplegic. Arquette is blameless in the guilt he feels for doing something he never wanted to do.

Now, twenty years later he is ready to try and make a comeback as an actual wrestler. It is interesting watch. He thinks he can slide in again with nothing more than his name and the 12 days he held the title belt and he is in for a rude awakening.

He gets beat down in a backyard match, but he is determined to continue. He is also smart enough to realize he needs training. From the streets Mexico learning the ways of the Lucha to a professional wrestling training camp in Virginia. He sheds 50 pounds in the process and becomes a passable wrestler.

Then his deathmatch with Nick Gage ends in a nicked artery and there is a moment of sheer panic in David's eyes when he thinks he's going to lose the match. Gage sees it and lets him out of a hold. Arquette leaves the ring, panics and then goes back so Gage can pin him to end the match and go to the hospital.

This is a warts and all documentary. It shows Arquette at his most vulnerable and doesn't apologize for anything. It's nice to see his sisters, his wife and children. Even Courtney Cox makes an appearance. Ric Flair's cameo at the beginning is very funny.

The slow acceptance by wrestlers as the movie progresses is very nice to see. I think they saw someone who was trying to make amends for something he felt was wrong.

It gives us a facet to the world of professional wrestling that you rarely see anywhere.

Ready To Rumble is my favorite David Arquette movie.

Posted by Douglas A. Waltz at 3:51 PM No comments: 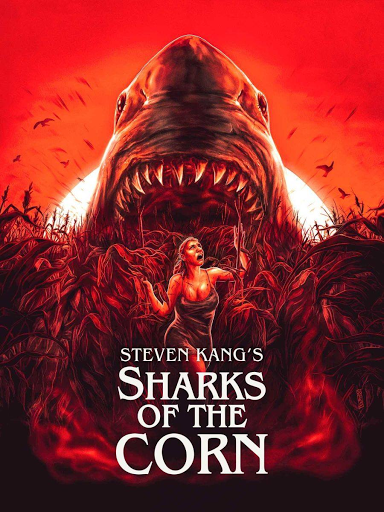 We're going to start with how much I love shark movies. If it has a shark in it, I'm going to watch it. Good or bad. I put shark movies into two categories; realistic ones like Jaws where it really is just a shark, and the silly ones. Donald Farmer's Shark Exorcist comes to mind right off the top of my head.

Finally, someone has embraced the insanity of the shark film and, of course it would have to be Tim Ritter.

I can still remember when Truth or Dare; A Critical Madness came to the video store. I even liked the first sequel and was able to tolerate the third one. Killing Spree is an excellent example of a fever dream made cellouid and Creep, well I do love Creep.

Now we have Sharks of the Corn. It makes an automatic trigger for the classic Children of the Corn and that's a good thing.

The basic idea is that Teddy Bo Lucas (Steven Guynn) is a mass murderer. But, his reasons are that he is helping to bring an ancient shark goddess back into existence when the Blood Moon is in conjunction with Stonehenge.

So, when Sheriff Scheider (Shannon Stockin) happens upon Teddy with a car full of body parts, she drags him in for the murder of her sister.

Meanwhile, CIA Agent Benchley (Casey Miracle) is working undercover to find out what is going on with a shark cult.

Oh, and the cornfields are full of sharks that just swim through the corn without a care in the world and shred anyone who comes into the field.

I traditionally avoid horror movies' with a run time of over 90 minutes, but I always give Tim Ritter a chance and I'm so happy I did. This thing just keeps moving along at an insane rate. Ritter knows enough about exploitation to give us gore, blood and boobs. Those are always a welcome thing in a movie.

What really makes it work is the fact that a ludicrous concept is presented to us and never made fun of. Just dead serious acting with then subject matter makes it work.

And then there's the other reason this is such a great movie.

Steven Guynn as Teddy, the shark killer. He is amazing to watch onscreen. You can feel the manic intensity come off the screen. He is a joy to watch.

So, if you think you've seen it all and not watched this movie, you haven't.

Right now you can watch it on PLEX for free. I recommend you watch it sooner than later.