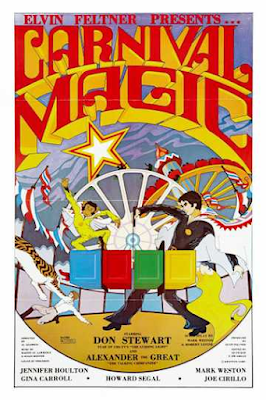 So, this is what you would call an impulse buy. Severin Films was selling it for three bucks. Three bucks, how can you go wrong with three bucks? Plus, Al Adamson directed it? Sure, what could go wrong?

So, Carnival Magic tells the story of a small carnival that is failing. The biggest draw would be the tiger tamer, Kirk (Joe Cirillo). An alcoholic, abusive jerk. Stoney (Mark Weston) and his daughter Ellen (Jennifer Houlton) try to keep things going, but they need a miracle.

The miracle comes in the form of their magician Markov (Don Stewart) who happens to have a friend named Alex who happens to be a talking chimpanzee. With the addition of Alex to his act soon the carnival is thriving, much to the dismay of Kirk.

To add insult to injury, Markov saves Kirk from a mauling by a tiger because he was drunk.

Now Kirk, along with an evil doctor, who wants to study Alex hatch a plot to get rid of Alex once and for all.

Carnival Magic is one of those unique films that defies description. The driving force behind the entire film is producer Elvin Feltner who produced one other feature Teenage Strangler (1964). Listening to the commentary by Feltner on the DVD he explains how he directed a few of the scenes, lent the production his girlfriend for a silly chase scene where the monkey is driving a car, and wrote the original story as well.

When you watch it you need to realize that he spent nearly a quarter of a million dollars to make Carnival Magic. That sounds like a lot, but he used 35mm, actually paid his actors and released it when there were not a lot of kiddie flicks being made. And that's what this is; a G rated kiddie flick.

The disc by Severin is just full of extras. There's an additional Al Adamson kid flick called LOST, with Jack Elam and Sandra Dee. A ton of outtakes for Carnival Magic, the aforementioned commentary. A TV Spot and Movie trailer and something where people I have never heard of talk about the film. Probably gonna skip that. The commentary with Feltner is required listening. There are rushes for an unproduced film called The Happy Hobo.

A lot of the quotes and reviews of the film seem a little mean spirited and I just don't see it. I had a great time watching this movie. It's like a time capsule for a more innocent time. The scenes of the carnival at night in the warm summer air filled me with a wonderful sense of nostalgia.

Carnival Magic is a great film.