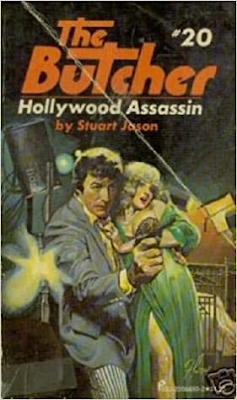 Before we get started; this is the only book I have read in this series. I'm more of a Nick Carter guy, but who am I to judge?
So this fella Bucher, they call him The Butcher. He used to be a top man for the syndicate but then decided he wanted out.
No one gets out of the syndicate so now he has a quarter of a million dollar price tag on his head. He also now works freelance for a secret government group called White Hat. And some government officials young daughter has been seduced by the bright lights of Hollywood.
Only problem is that one of the biggest studios has been taken over by the syndicate where they shoot high end porn.
So, Bucher needs to find her and not get killed by his former employers in the process.
Seems pretty easy, right?
This is a pretty violent and graphic book. We get a lot of gruesome descriptions of what happens when Bucher shoots someone. Gun noises also factor in quite a bit.
It was a fast enjoyable read, but there really is nothing here to make me search for other books in the series.
Posted by Douglas A. Waltz at 6:23 AM