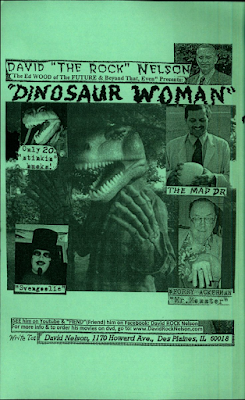 So, here we are again at the altar of the one and only David Rock Nelson.

I was geared up and ready to watch it in half hour increments.

And then it was over in three days.

Why? Well, there is a lot less of Detective Rock eating and much less of showing off his monster stuff. There was a lot of Dinosaur Woman attacks and you know that Jan wasn't in the suit all that much, but that's cool.

We did get a little driving tour of Des Plaines with narration by David so, that was interesting. I thought it was odd that the Dinosaur Woman laid so many eggs, but we never got one of them to hatch. Svengoolie is at a signing so he's in the movie and he is just the sweetest man. We also get Forry Ackerman being attacked by Dinosaur Woman and he put his all into it. There are a lot of people attacked at Monster Bash, which is normal for David's movies.

The basic plot has The Mad Doctor (David) playing with Dinosaur DNA and adding a little cherry soda and whiskey (David pronounces it Viskey, for comedic effect)to the mix for Jan to drink down and become...The Dinosaur Woman. Jan did a great job during the transformation sequence and she does add a little something to David's films.

This one had footage from a lot of different time spans. The lab stuff is all 1996 with a much younger David as the mad doctor, of course. His brother shows up in a couple of scenes, one where he can't stop laughing which made it even better.

So, of the three David Rock Nelson movies I now have under my belt, this one is the most cohesive of the three. We still get the organic process of David working through scenes, sometimes with multiple takes and lots of hot java.

I'm pretty sure I will need to start collecting these movies. I was a little sad when Dinosaur Woman was over, but never fear! According to the mandatory trailers for a few of his films, Dinosaur Woman will return and I can not wait.